After the $6,000 rise in Bitcoin price over the last two days, BTC couldn’t cross over the $56,500 resistance. While the overall sentiment is negative, technical analysis tells us that these signs are on the verge of turning positive.

Long-Term Supply On the Rise 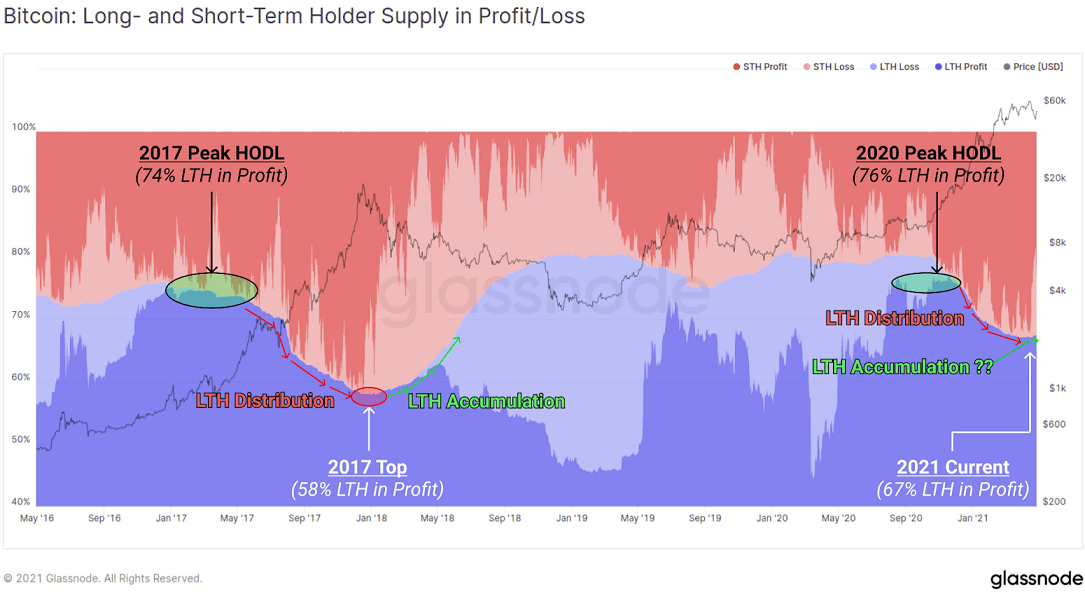 Glassnode shared the above chart along with this tweet:

“#Bitcoin supply held by Long Term Holders (LTH) usually needs to be spent to 'put the top in'. At 2017 top, LTHs had reduced their holdings from 74% to 58% of circ. supply Currently, coins accumulated in late 2020 are maturing and LTH owned supply is actually increasing > 67%.”

Nexon Snaps Up $100 Million Worth of Bitcoin

South Korea-based video game firm Nexon recently said that it had purchased $100 million worth of Bitcoin, paying on average $58,226 per coin. CEO Owen Mahoney noted that the move would protect shareholder value. He added that BTC offers long-term stability and liquidity too.

Our purchase of bitcoin reflects a disciplined strategy for protecting shareholder value and for maintaining the purchasing power of our cash assets. In the current economic environment, we believe bitcoin offers long-term stability and liquidity while maintaining the value of our cash for future investments.

In December, Nexon's market cap surpassed $30 billion due to increasing demand for gaming. The platform is currently the second-biggest game developer whose shares are trading in Japan, behind only Nintendo.

The $100 million purchase is the biggest cryptocurrency investment of any company listed on the Tokyo Stock Exchange so far. It accounts for 2% of the company's cash pile. Earlier in April, Hong Kong-based beauty app Meitu also made another $10 million investment in crypto, bringing its total Bitcoin and Ethereum holdings to $100 million.

The buyers will need to overcome the $56,500 resistance barrier to prevent a drop. Breaking past this line will turn market sentiment positive and push BTC into the $60,000 zone.