Prior to the drop, the Bitcoin price had risen from $48,275 to $61,100 between March 5 and March 13. Due to the recent drop, the MACD tells us that the market momentum is on the verge of turning from bullish to bearish.

The $56,300 resistance is particularly strong since 565,700 addresses had previously purchased over 280,000 BTC tokens. This zone is robust enough to absorb a lot of buying pressure.

Bitcoin Supply Going Down As Whales Eat Up BTC

Santiment shared the following chart to show that as Bitcoin price dropped to $53,500, the whales lapped up the BTC coins in the open market. 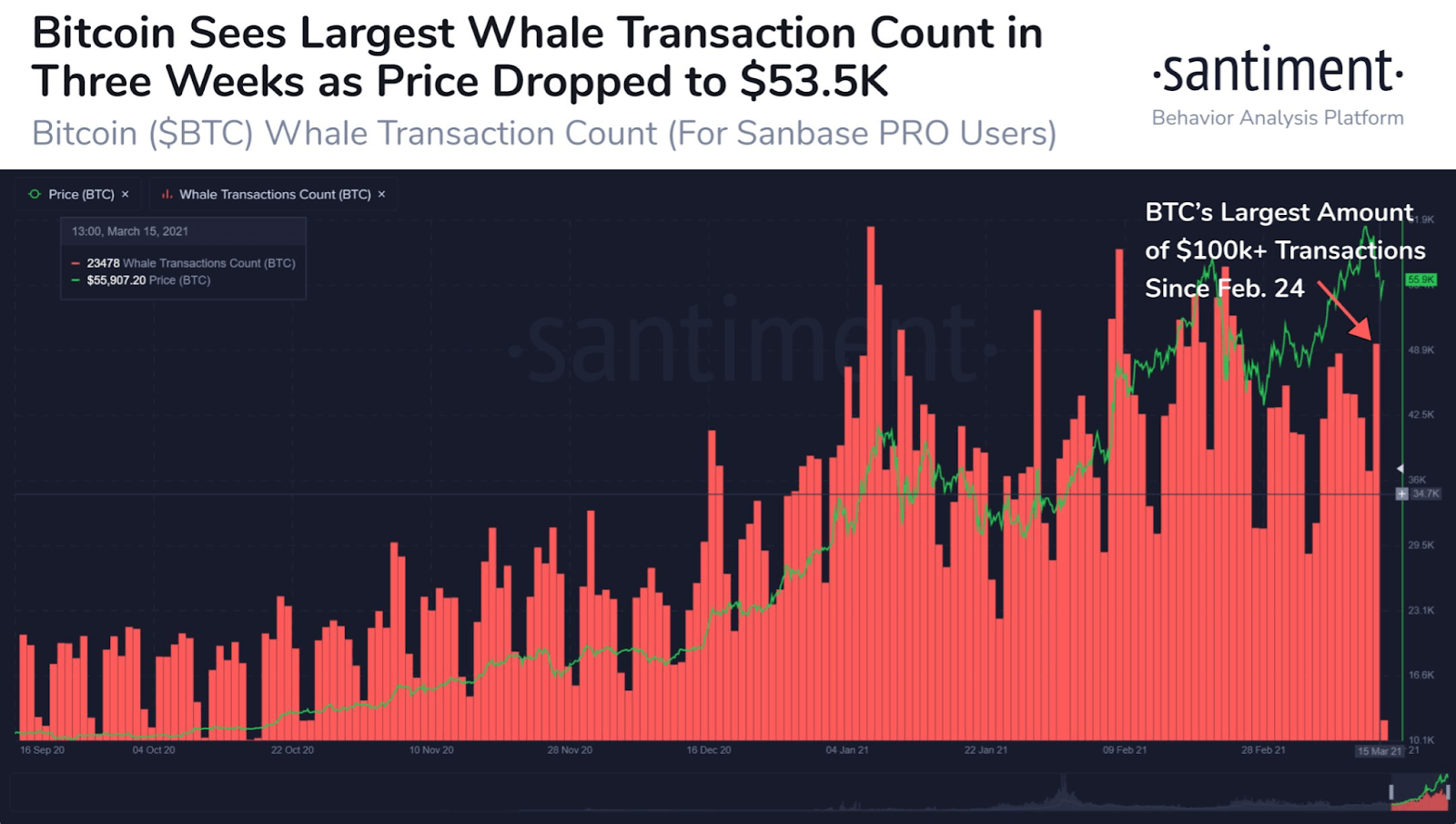 “With #Bitcoin's mid-sized correction on a red Monday, we can see that whales were quite active. In fact, 23,478 was the largest number of $100,000+ transactions on $BTC's network in three weeks. The trend of rising whale transactions is quite striking.”

Glassnode then shared the following chart to show that the Bitcoin supply is quickly drying up. 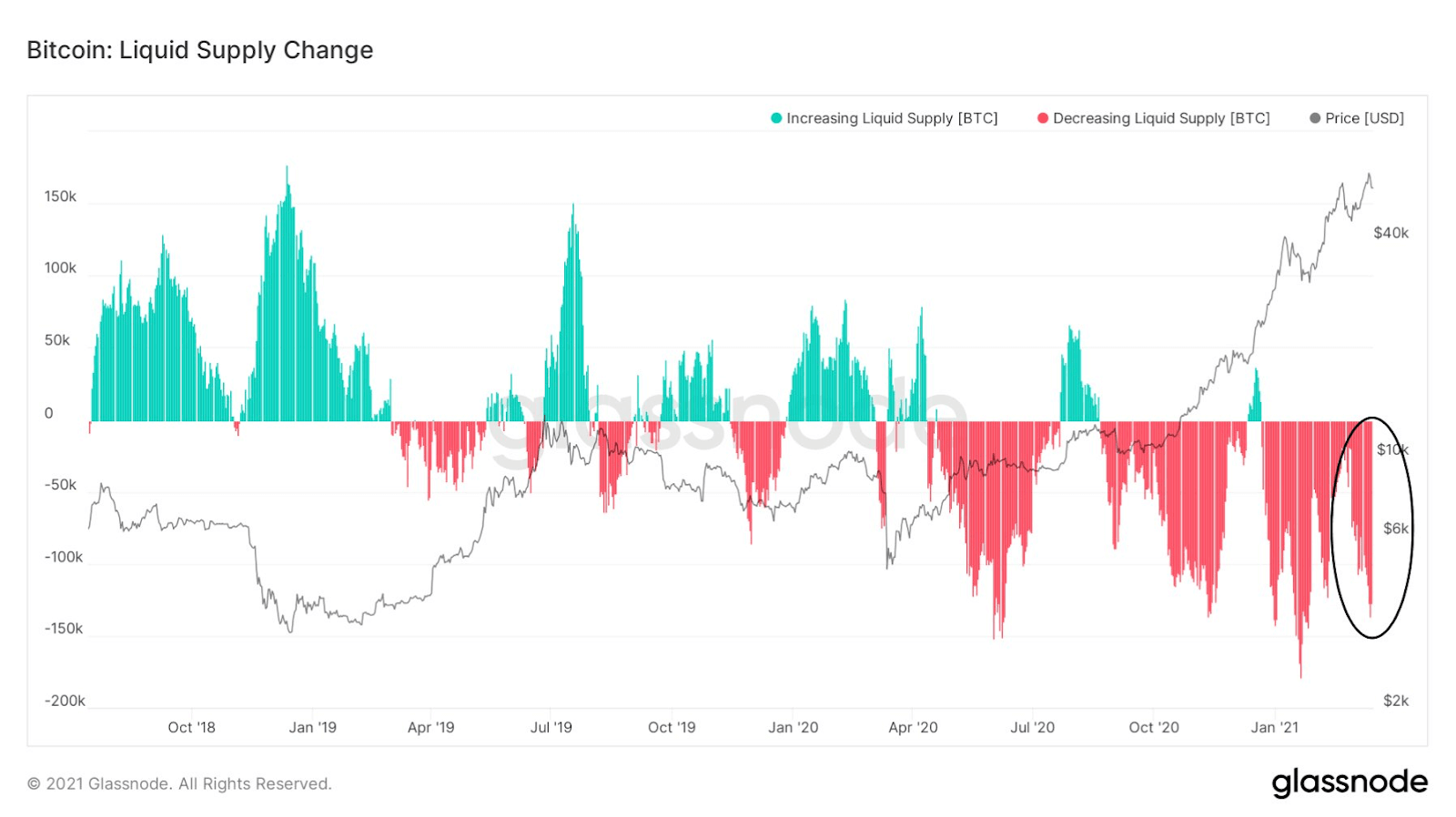 “Despite recent volatility, #Bitcoin supply is still drying up at astonishing rates for this time around in the cycle.”

A recent survey by Mizuho Securities has revealed that a large part of the stimulus money will end up in stock markets and the crypto economy. The firm surveyed 235 individuals who make less than $150,000 annually.

According to the survey report, around 10% ($40 billion worth) of the stimulus funding will find its way into stocks or Bitcoin (BTC). Mizuho managing director Dan Dolev said:

The survey predicts that bitcoin will account for 60% of total incremental investment spend. We calculate it could add as much as 2-3% to bitcoin’s current $1.1t trillion market value.

The US citizens have been receiving direct stimulus checks for $1,200 and then $600. Most of the people have presumably spent these funds on cryptocurrencies. For instance, in mid-April Coinbase CEO Brian Armstrong had shared a chart showing a spike in $1,200 deposits on the crypto exchange.

Out of the 235 survey participants, 200 said they expect stimulus payments within the “coming days.” Around two out of five of the direct stimulus check recipients said that a part of funds will be allocated to investment purposes. The study also noted that the survey participants “prefer bitcoin over stocks.”

As far as stocks are concerned, respondents showed interest in buying equities in companies like Square, Paypal, Mastercard and Visa.

India FUD May Affect Bitcoin Price In The Longterm

The legal status of digital assets continues to remain ambiguous in India. A recent Reuters report cited anonymous government officials who said that the state will “propose a law banning cryptocurrencies, fining anyone trading in the country or even holding such digital assets.” However, India’s Financial Minister said the country will still have a “window” for Bitcoin.

According to a Blockworks report, Harold Montgomery, the former CEO of Indian mobile payments company Money on Mobile, said:

Indians have long sought steady stores of value in gold and other assets. [Digital assets] such as bitcoin have become substitutes for savings accounts and gold stores. Most Indian citizens understand that the rupee has lost tremendous purchasing power relative to other currencies over time. Allowing citizens to exit the rupee and buy bitcoin for example, will further erode the value of the rupee.

Montgomery added that “deep concerns” over terrorist financing are one of the reasons why some officials in the Indian government are supporting a Bitcoin ban. However, Nirmala Sitharaman, India’s Finance Minister, appeared hopeful about the use of cryptocurrencies in the nation.

From our side, we are very clear that we are not shutting all options. We will allow certain windows for people to do experiments on the blockchain, bitcoins or cryptocurrency.

In an earlier interview with CNBC, Sitharaman had said that “a very calibrated position taken” will be taken into consideration when a crypto bill is presented to the country’s parliament in the near future.

One of the experiments Sitharaman referred to is the creation of a digital Rupee in the form of a central bank digital currency (CBDC). Reserve Bank of India, the country’s central bank, has been exploring this idea for a while now.

Montgomery explained that this has been in the works since 2015, adding:

There are huge benefits to be gained from a digital Rupee, but the RBI will control it from start to finish.

In a recent report published by the RBI, the bank outlined the strengths and weaknesses of an Indian CBDC. An excerpt from the report reads:

The Bitcoin price will struggle to break past the $56,000 resistance. However, it if it does manage to do that, it will reach the $58,000 barrier.