The Bitcoin price has made a strong recovery during the current session, after starting the current week on a bearish note. BTC had ended the previous week on a bearish note as well, falling on Friday and Saturday to drop to $42,964. Despite a marginal rise on Sunday, BTC fell back into the red on Monday, and by Tuesday, the price had dropped to $42,166. Wednesday saw the price push up marginally before the current session saw BTC move past $43,000.

The Bitcoin price has had quite a bearish month, with BTC down from over $50,000 at the start of the month to hovering around $43,000 at the end of it. Keeping in line with the bearish sentiment, BTC started the previous week on a highly bearish note, with the price falling by over 8%, slipping below the 50-day SMA, 200-day SMA, and the $45,000 level and settling at 443,296. The slide didn’t stop there as Tuesday saw the slump continue, with the price falling to $41,690 before recovering on Wednesday and pushing up to $43,555. Thursday saw another significant increase as BTC moved up to $44984 before the price turned bearish again and fell by over 4% on Friday to drop to $43,113. 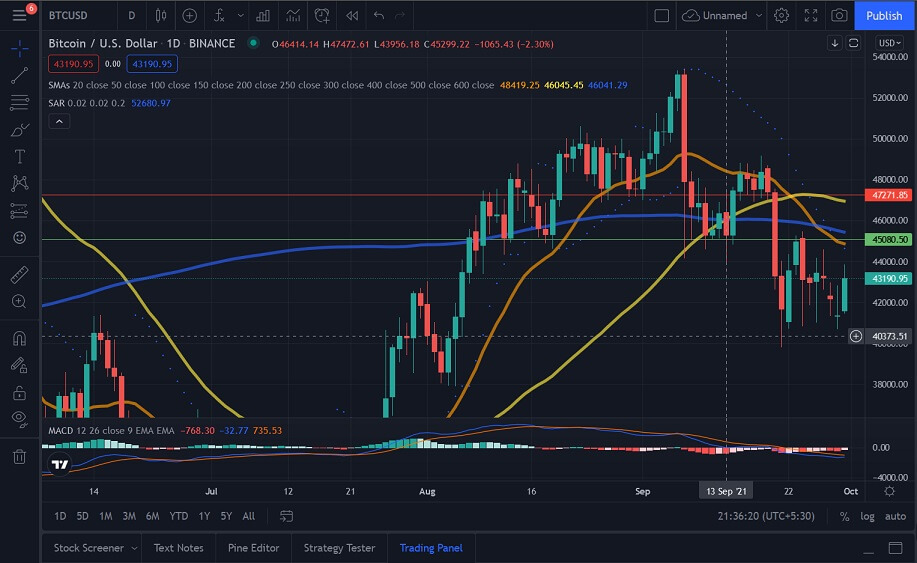 The bearish sentiment continued into Saturday as the price fell marginally before recovering and rising by a little over 1% to end the previous week at $43,452. Despite the marginal rise on Sunday, BTC fell back into the red, starting the current week down by 0.59%. The price fell further on Tuesday, falling by 2.39% to drop to $42,166. However, Wednesday saw BTC recover as the price rose by 1.93%. The current session has also seen a significant increase, with the price already up by over 4%. If BTC can keep the current momentum going and push towards $43,500, we could see both the Parabolic SAR and the MACD flip to bullish. 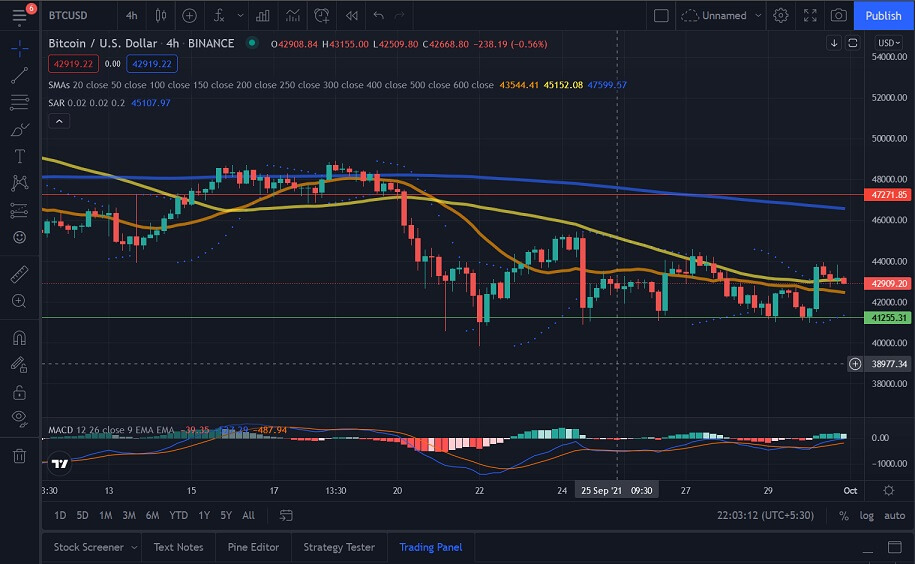 Ali Sahraee, the CEO of the Tehran Stock Exchange, has reportedly resigned after discovering cryptocurrency mining rigs in the building. According to a report from the Islamic Republic News Agency, Tehran Stock Exchange (TSE) market vice president Mahmoud Goudarzi will be leading the company following the departure of Sahraee.

The change in leadership seems to be the result of "a number of miners" being discovered in the basement of the TSE building located in the district of Sa'adat Abad.

The TSE reportedly initially denied the news, saying the equipment was part of a research project. However, executive deputy director Beheshti-Sarsht later said the company should be held accountable for its actions.

Iranian President Hassan Rouhani announced the ban on crypto mining in May. It is unclear when authorities discovered the mining rigs in an inspection of the TSE basement, but the activity was seemingly still illegal until the last week of September.

During the ban, authorities conducted many raids on crypto miners big and small, seizing illegally operating miners and fining households responsible for generating blocks. However, most raids were focused on abandoned factories, homes, and small businesses, nothing as high profile as Iran's largest stock exchange.

The energy crisis in Iran has led to blackouts and brownouts, with many officials blaming crypto mining for sucking up the juice. However, an August report from the Ministry of Industry, Mine and Trade said that the claims that some authorities had made regarding the power usage of crypto miners “seem to be highly exaggerated.”

Looking at the Bitcoin price chart, we can see that BTC has recovered very strongly during the current session, and with sellers in control of the market, we could see BTC push towards $43,500.