Over the last six days, the Bitcoin price is stuck between the $59,000 resistance and $57,000 support lines. As things stand, the narrative surrounding BTC isn’t going to change anytime soon when it comes to their price action.

Both of these levels look pretty strong, so we don’t expect Bitcoin price to break above and below these levels anytime soon. The MACD shows increasing bearish momentum so it's safe to say that the $59,000 resistance isn’t going to break any time soon.

However, the downside is protected as well by a plethora of strong support levels. The $57,000 support, as per the IOMAP is pretty robust since a million addresses had previously purchased 442,000 BTC tokens at this level. 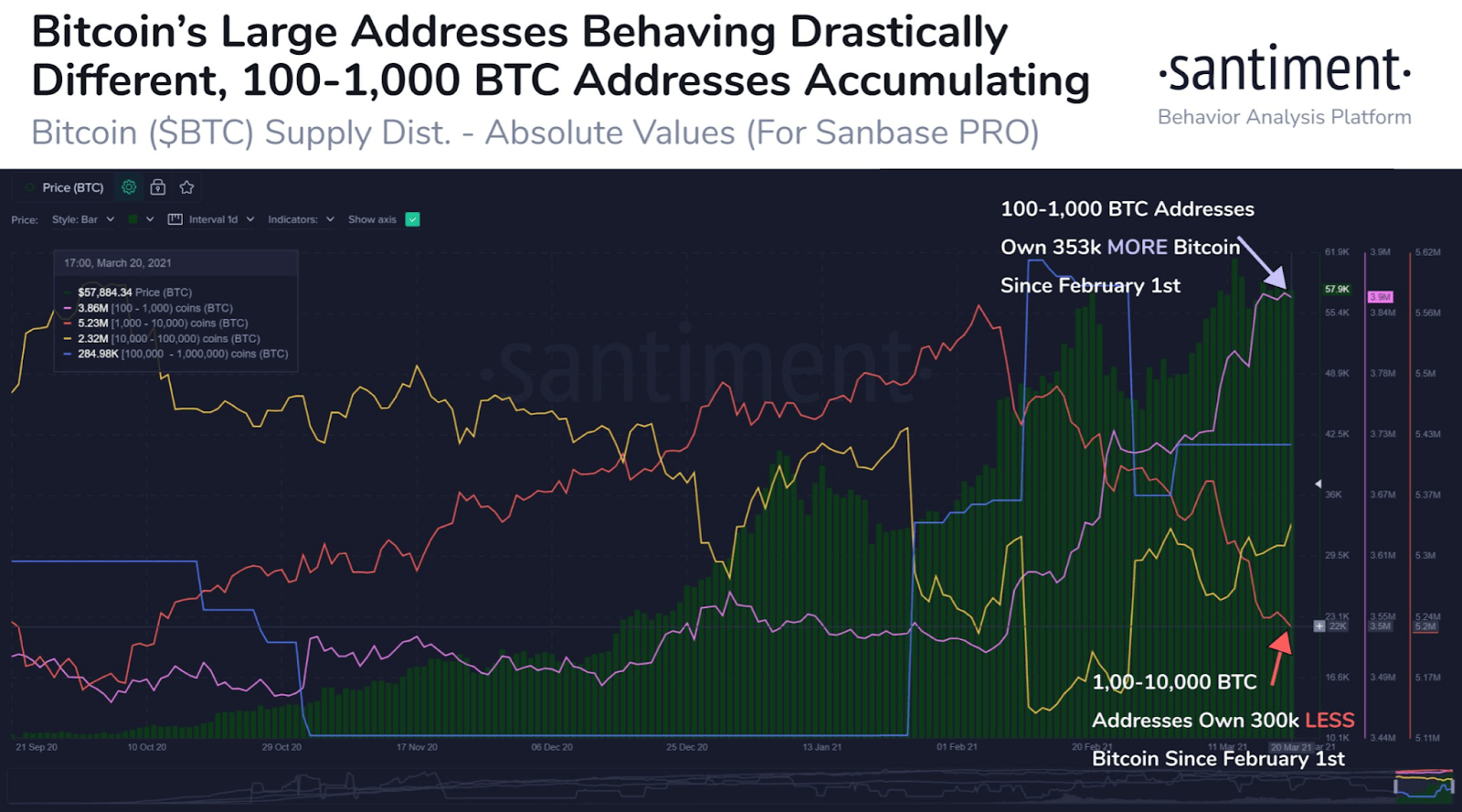 “As you'd expect, not all of #Bitcoin's whales are behaving in unison. However, we've seen interesting trends these past couple months, such as 100-1,000 $BTC addresses adding 353k more $BTC since Feb. 1st, while 1k-10k addresses have shed 300k $BTC.”

Glassnode made the following observation with its HODL Waves chart. In this chart, each colored band shows the percentage of Bitcoin in existence that was last moved within the time period denoted in the legend. 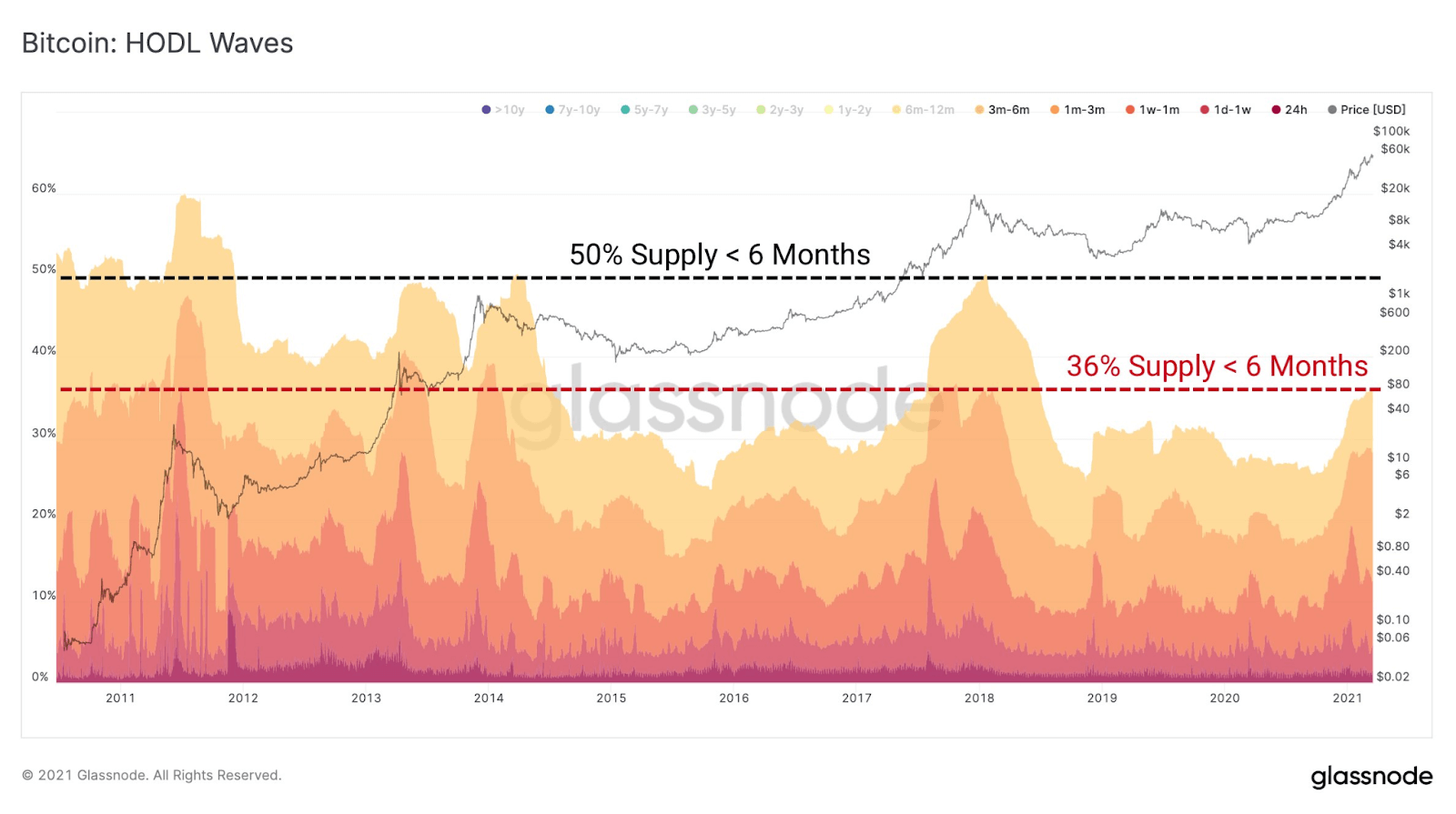 “In bull markets old coins tend to move more. This increases the relative supply of younger coins in the network. At previous $BTC tops, around 50% of the #Bitcoin supply was younger than 6 months. We are currently significantly below this level (36%).” 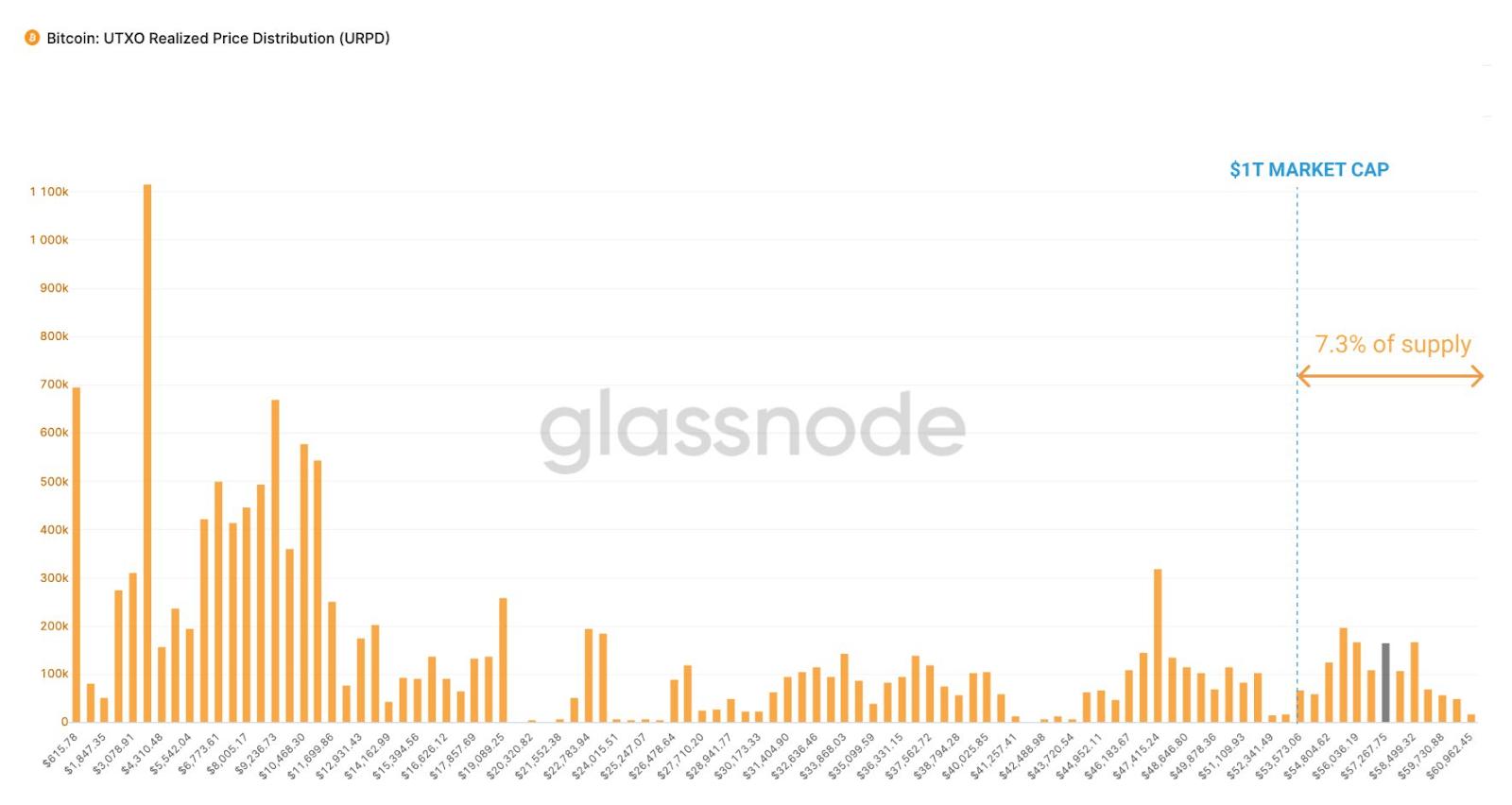 Willy Woo shared the chart above and tweeted the following:

According to a new report published by Deutsche Bank, Bitcoin is now “too important to ignore” in part due to its $1 trillion market capitalization. The coin’s price could keep rising as long as companies and asset managers keep buying BTC.

According to the report, analyst Marion Laboure said that the real debate is whether BTC’s evolution into its own asset class comes from its valuation alone. Laboure compared Bitcoin to Apple shares, pointing out that 28 million BTC (150% of all the coins in circulation) changed hands last year. In comparison, 40 billion Apple shares (270% of the shares in circulation) were traded.

“#Bitcoin’s value will continue to rise and fall depending on what people believe it is worth. Find out why this is sometimes called the Tinkerbell Effect”

According to MarketWatch, the Tinkerbell effect is an economic term that “describes how something is likely to happen when more people believe in it.” It’s named after Peter Pan’s claim that the fairy Tinkerbell exists because children believe it does.

Laboure went on to compare Bitcoin to Tesla, as the cryptocurrency would “have to transform potential into results to sustain its value proposition.” Similar to BTC, Tesla sparked debates as to whether it was the future of the car industry or a fad. The sentiment shifted after it started successfully delivering cars at scale.

In a recent review, Francisco Blanch, a Bank of America (BoA) analyst, criticized Bitcoin using various criteria. According to Blanch, the flagship cryptocurrency has many flaws including its volatility and practicality.

Bitcoin’s limited supply protects it from quantitative easing and other monetary policies that inflate the money supply and devalue fiat currencies. However, according to the analyst, evidence shows that BTC is not a proper inflation hedge.

Broadly, we find that Bitcoin has not been particularly compelling as an inflation hedge as commodities and even equities provide better correlations to inflation.

Notably, in major developed countries, Bitcoin is yet to be tested as an inflation hedge. However, inflows from Tesla, MicroStrategy, Square and other corporations suggest BTC as a viable alternative.

Commenting on the transaction speed, Blanch compared BTC’s 1,400 transactions per hour capacity to Visa’s 236 million. He also claimed that 95% of all circulating Bitcoin is owned by 2.4% of addresses, suggesting an incredibly high concentration. He noted that this could make the asset “impractical as a payments mechanism or even as an investment vehicle.” 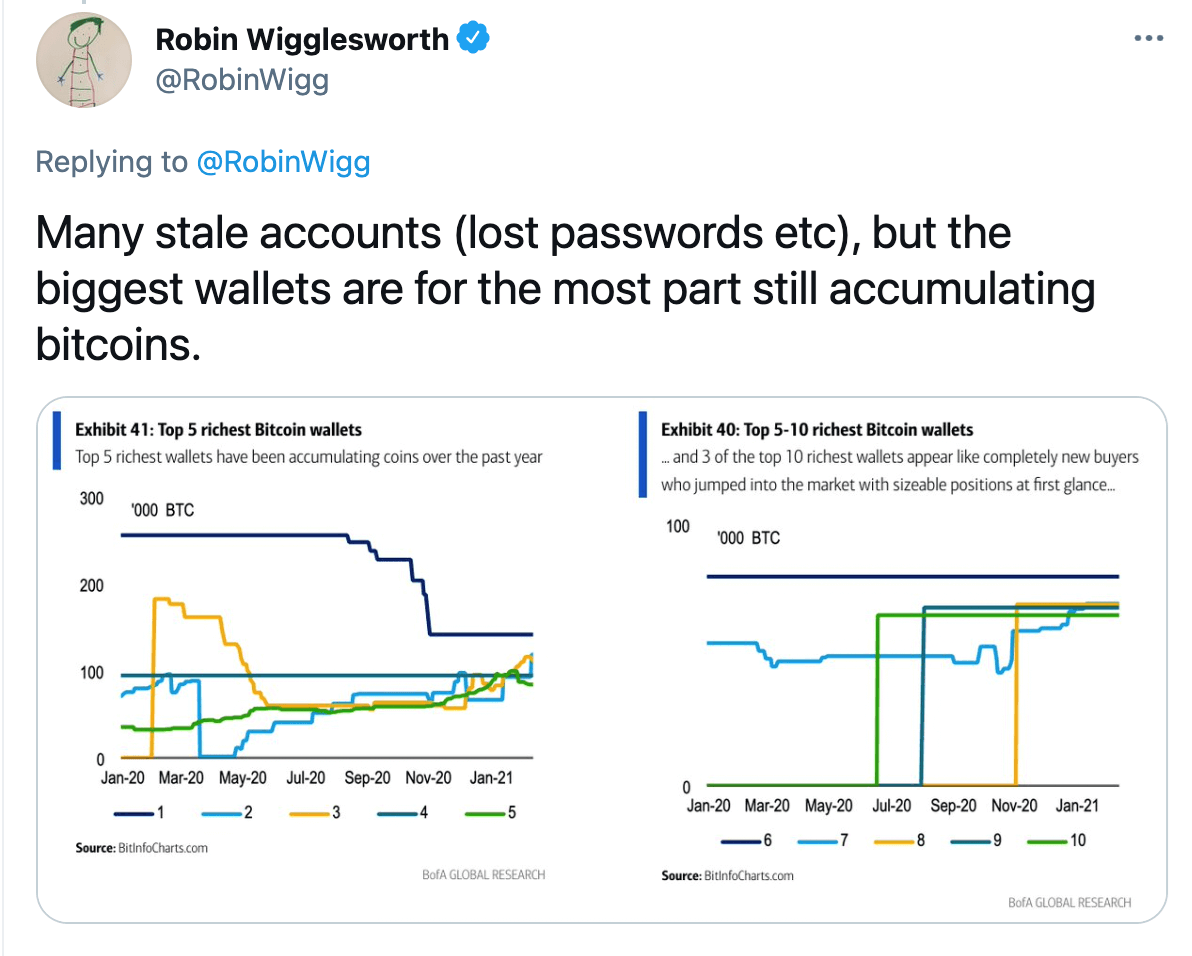 Per BoA, the concentration leaves BTC “vulnerable to sharp price swings on account of movements in these whale accounts.” Notably, while most of the supply is gathered by a small fraction of entities, large addresses belong to exchanges and other platforms that hold coins on behalf of thousands of users.

The analyst also pointed to Bitcoin’s energy usage. Blanch noted that every $1 billion put into the asset causes as much carbon dioxide as 1.2 million cars in a year. The University of Cambridge Center for Alternative Finance estimated BTC consumes 0.6% of the world’s electricity. However, the University added that “there is currently little evidence suggesting that Bitcoin directly contributed to climate change.”

Popular cryptocurrency analyst Alex Kruger took to Twitter to comment on the BoA Bitcoin review. He shot down other arguments comparing Bitcoin’s transaction speeds to Visa and the potential impact central bank digital currencies (CBDCs) will have on crypto. 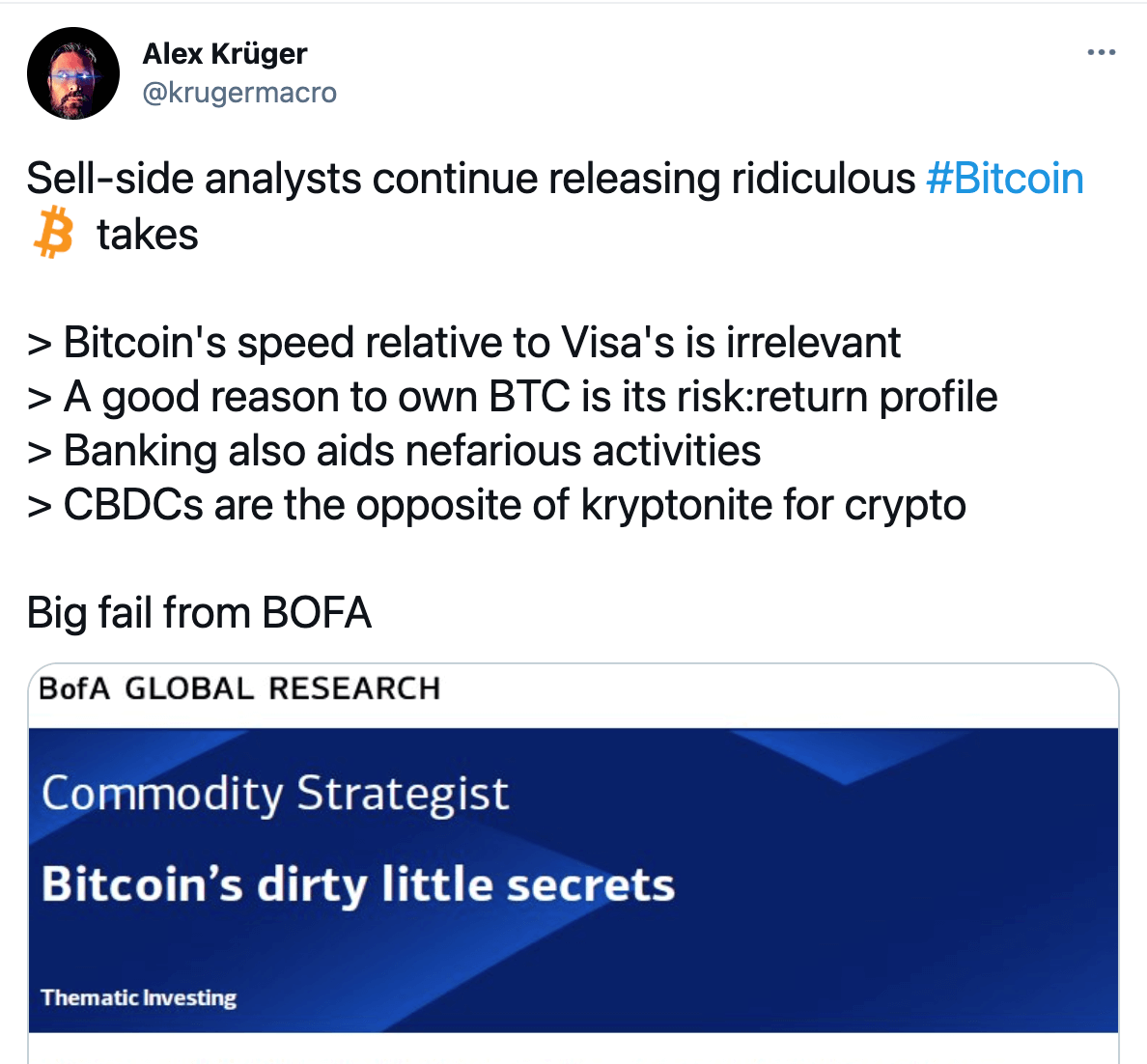