Bitcoin price pullback from the all-time high at $65,000 has sparked massive discussions across global platforms. The European Central Bank (ECB) report referred to the current volatility as a bubble in waiting. The co-founder of Ethereum, Vitalik Buterin, says that cryptocurrency may be a bubble but certainly is not a toy.

Bitcoin bulls on the verge of exhaustion as declines linger

Following the massive pullback, Bitcoin swung upward, brushing shoulders with $42,550. The sharp reflex-like recovery stalled short off $43,000, and BTC adjusted to $40,000. Over the last 24 hours, the bellwether cryptocurrency has been pivotal at this level, unable to make significant progress toward $50,000.

On the downside, support at $38,000 plays a crucial role in keeping the price afloat. However, short-term technical analysis reveals the possibility of exhaustion in the bullish camp. For example, Moving Average Convergence Divergence (MACD) has a bearish compulsion.

Besides sticking to the negative area (beneath the mean line), the MACD line (blue) divergence from the signal is still vast. It implies that bears still have the upper hand amid weakening technical levels. 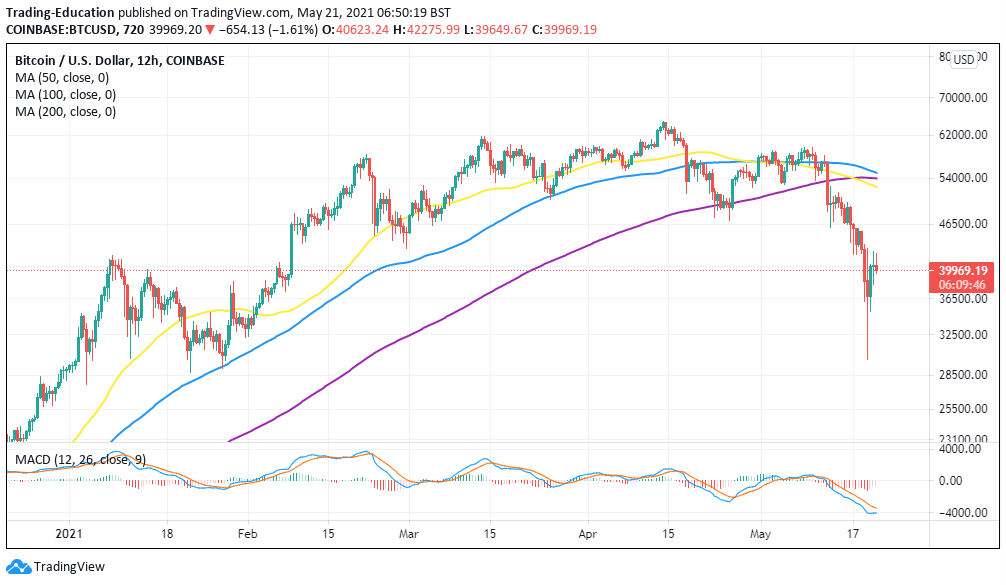 The “Daily Active Addresses” metric by IntoTheBlock confirms the downtrend amid a consistent decrease in the number of new addresses joining the Bitcoin network. According to the chart below, the price and the unique addresses are correlated. It follows that a declining network growth disrupts the regular inflow and outflow of coins on the protocol. Therefore, bulls find it challenging to sustain the uptrend amid reduced levels of speculation. An average of 417,600 addresses has been created on May 20 compared to a 30-day high of 563,000.

According to Santiment, Bitcoin exchange outflow has continued to surge despite the drawback. This metric shows the amount of BTC withdrawn from known exchange wallets. Note that exchange-to-exchange transactions are excluded from this metric.

A spike in exchange outflow infers a short-term accumulation trend. In other words, investors prefer to hold. As supply diminishes on exchanges, demand tends to increase; thus, a bullish signal.