After trending horizontally around the $59,000 resistance barrier, the Bitcoin price dropped to $56,850 this Saturday. During this drop, BTC fell below the 2 month+ long upward trending line. However, the buyers soon retook control of the market.

Bitcoin Price Looks To Jump Back Above Key Level

The buyers will need to close one candlestick above the upward trending line. However, the MACD shows sustained bearish market momentum, which shows that the buyers still have quite a task in their hands.

CryptoQuant shared the following graph and observed that the Korea’s famous Kimchi premium has reached a yearly high. 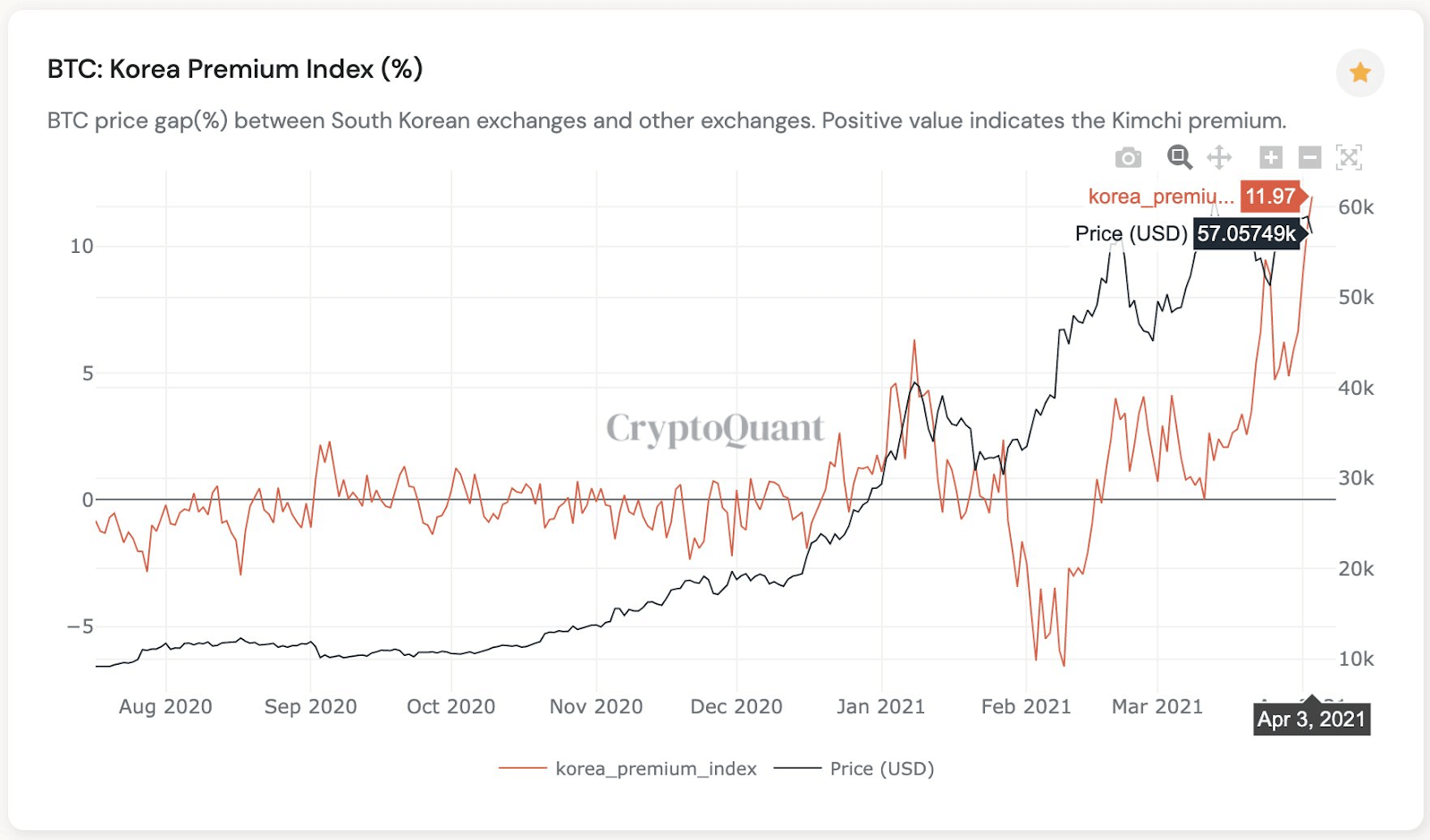 ”$BTC fundamentals still look good, but the Korean bubble is worrisome to me. Shitcoins prices are skyrocketing, and Korean crypto trading volume has surpassed the national stock exchange(KOSPI)”

During his tweet, he also noted that the 24-hour trending volume in Korean exchanges for Bitcoin is only 1.7% of the world's whole trading. So, even if this Kimchi bubble pops, the impact is “unlikely to be significant since it's just 1.7%.”

Bitcoin’s volatility has significantly dropped in recent times. According to the Bitcoin Volatility Index, its 30-day volatility dropped from a high of 5.34% on March 9th to 3.42% recently. According to an on-chain metric, the asset is due for a substantial move up in price. 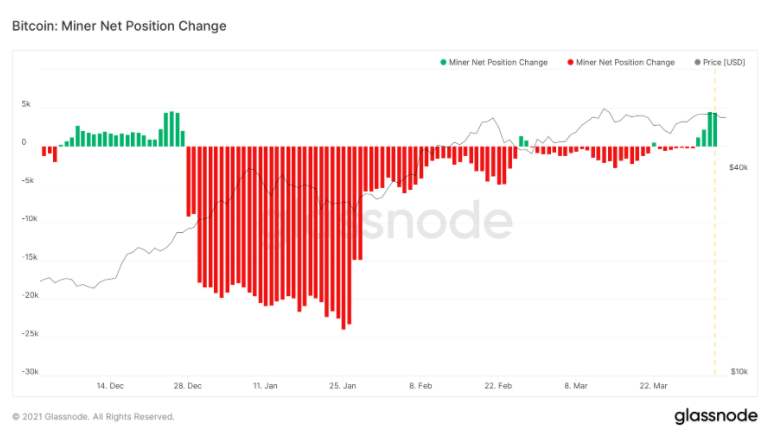 The renewed accumulation is a bullish indicator as it suggests that miners are speculating that the price of Bitcoin will increase shortly. On April 1st, the net position change peaked at an aggregate of 4514 coins a day and has continued to hold up. The last time miners were accumulating at such levels was back in December 2020, when the BTC doubled its value from $20,000 to $40,000.

As Bitcoin’s institutional demand and recognition as “digital gold” continue to grow, the stablecoin is likely to soar to new highs. JP Morgan recently updated its long-term outlook on the digital asset’s price expectations to $130,000, citing a growing number of institutional investors and decreasing volatility.

Analysts from JPMorgan Chase said that the recent decline in Bitcoin’s volatility could positively influence banking investments. The analysts, led by Nikolaos Panigirtzoglou, have criticized BTC in the past for its substantial fluctuations that could reach double-digit percentages in a day. However, they have admitted that Bitcoin has calmed lately, which could signify the reentrance of banking institutions into the crypto space.

According to a report cited by a Bloomberg report, they said:

Banks appear to be changing their stances about the flagship crypto. Morgan Stanley recently enabled its institutional customers to buy BTC through three funds and reportedly planned to acquire a stake in the crypto exchange Bithumb.

A few months ago, Goldman Sachs said that Bitcoin was not an asset class and openly criticized the crypto industry. Yet, the banking giant filed for a Bitcoin ETF with the SEC and announced plans to launch Bitcoin services to its clients later this year.

Jay Clayton: New Bitcoin Regulations Are On The Way

Former US Securities and Exchange Commission (SEC) chairman Jay Clayton has suggested that Bitcoin and other cryptocurrencies will be more regulated in the future. During a recent CNBC interview, he said: 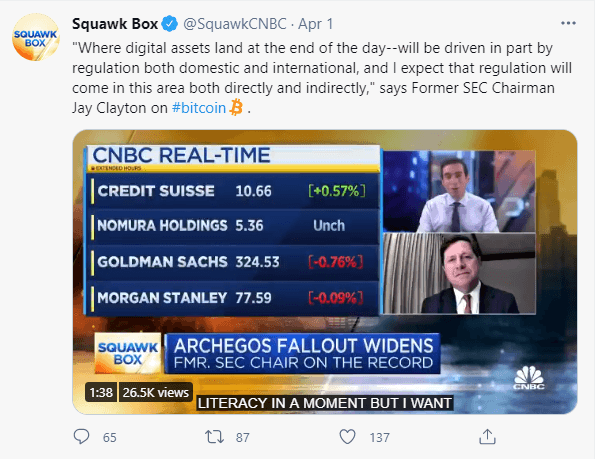 “Where digital assets land at the end of the day--will be driven in part by regulation both domestic and international, and I expect that regulation will come in this area both directly and indirectly," says Former SEC Chairman Jay Clayton on #bitcoin

Clayton, who recently became a cryptocurrency advisor to investment firm One River Asset Management, noted that the SEC does not consider Bitcoin a security. However, he added that this does not mean that "it should not be regulated."

In fact, where digital assets land at the end of the day, which is very much a wide-ranging question, […] will be driven in part by regulation—both domestic and international. And I expect, and I’m just speaking as a citizen now, I expect that regulation will come in this area both directly and indirectly. Whether it’s through how these are held at banks, or securities accounts, taxation, and the like.

Notably, Clayton’s comments come amid the ongoing legal battle between the SEC and Ripple Labs. The regulator filed a $1.3 billion lawsuit against Ripple, alleging the firm and its executives (Brad Garlinghouse and Chris Larsen) to have earned hundreds of millions of dollars by illegally selling XRP as unregistered securities.

Bitcoin Price Is Expected To Reach These Levels
The Bitcoin price will likely flip the upward trending line from resistance to support and reach the $59,000 mark.