The Bitcoin price fell for the second day running, as sellers managed to push BTC below $56,000. The price drop comes after a bullish weekend that saw the price increase to $54,692 on Saturday and then $55,274 on Sunday to end the previous week on a positive note. The price continued to be bullish on Monday as it rose to $57,198 but fell back on Tuesday, dropping to $56,170. The current session also sees BTC in the red, with sellers pushing the price towards $55,000. 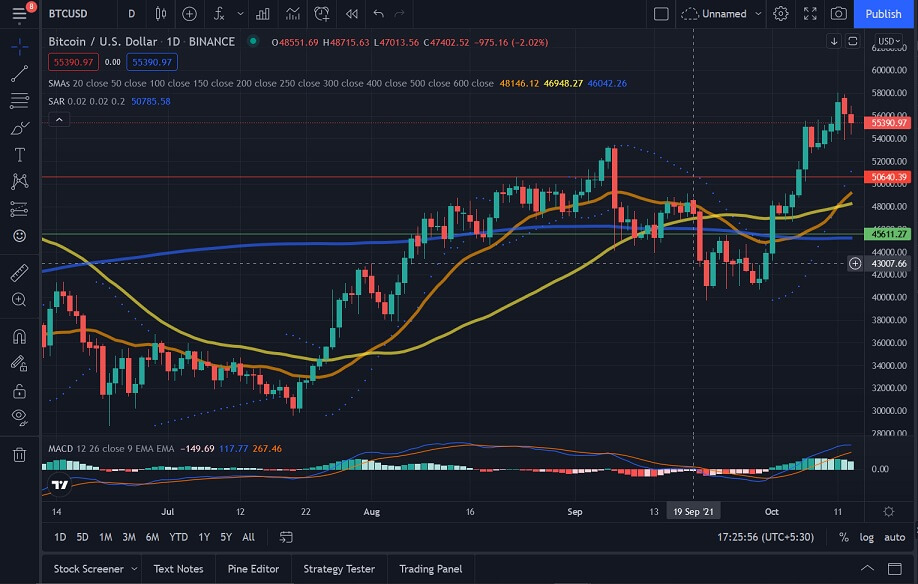 The Bitcoin price registered a marginal increase on Friday, as BTC recovered after Thursday’s fall. The weekend saw BTC remain bullish, as the price rose by 2.06% on Saturday and then by 1.06% on Sunday to end the week at $55,274. BTC remained bullish as the current week got underway, with the price rising by 3.48% on Monday, pushing BTC past $57,000. However, BTC registered a fall of 1.80% on Tuesday, as the price dropped to $56,170. The current session also sees BTC in the red, but we could see the price recover with the Parabolic SAR and MACD still bullish. However, if the price falls towards $55,000, then we could see both flip to bearish.

Looking at the 4-hour Bitcoin price chart, we can see that BTC was quite bullish, but the price seems to have taken a slight dip over the past few sessions. We can see that the 20-bar SMA was acting as support, as BTC rose by almost 7% on the 6th, moving to $54,685. However, BTC could not remain at this level and dropped to $53,289 before rising to $54,776. The price fell again, with BTC dropping to $53,589, with the 20-bar SMA propping up the price. BTC maintained this level thanks to the 20-bar SMA and then rose to $56,591 on the 11th. The price further rose to $57,565 before bearish sentiment pushed the price below the 20-bar SMA to $54,839. We can see that both the Parabolic SAR and the MACD are bearish, indicating that the price could drop further. 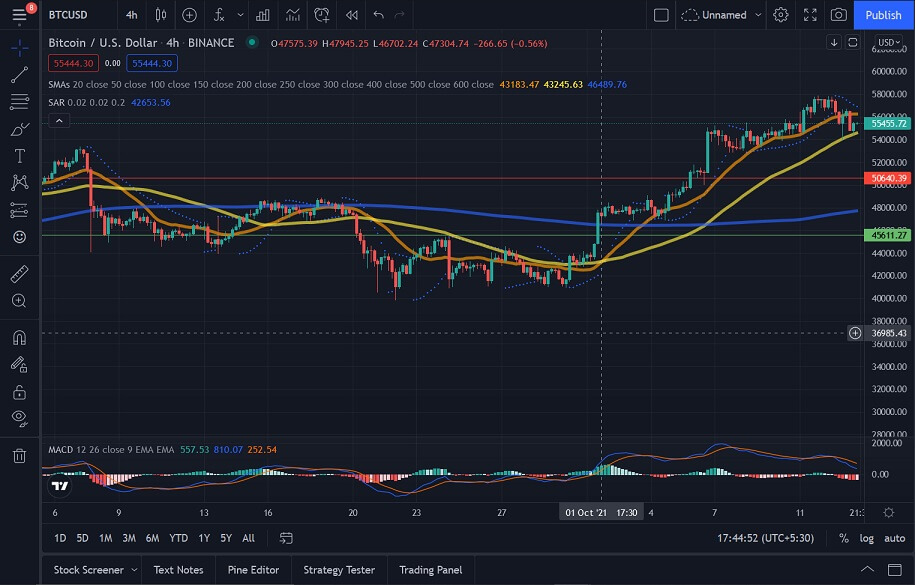 Crypto investors may have a longer wait for a Bitcoin futures exchange-traded product, according to Todd Rosenbluth, senior director of exchange-traded funds (ETF) and mutual fund research at research firm CFRA.

Speaking on CNBC’s ETF Edge, Rosenbluth stated that while a Bitcoin futures product is likely to be the first crypto ETF to gain approval, he cautioned that the current clouded regulatory situation could cause further delays.

More than 20 crypto exchange-traded products are waiting for approval from the United States Securities and Exchange Commission. The researcher suggested that regulators could be waiting for all of these products to meet their goals so that they can be approved at the same time to avoid a “first-mover advantage,” before adding:

“It’s possible — in fact, we think it’s likely — that we’re going to see a delay of a Bitcoin futures ETF until 2022 until the regulatory environment is more clear.”

Van Eck Associates CEO Jan van Eck commented that the primary concern for the SEC is the discrepancy between actual Bitcoin prices and the price of the futures contract, in addition to the potential of funds getting too large.

Eck also suggested that the regulator needs to gain more control over crypto trading. It appears to be attempting to do so with its recent threats against Coinbase and the exchange’s stablecoin lending product. Other popular trading platforms such as Robinhood are already regulated and registered as broker-dealers.