Bitcoin continues to go through a short-term price correction as the bears stay in control for the third straight day. In this time period, BTC dropped from $23,860 to $22,730. Let’s see what’s going on behind the scenes with technical analysis.

Prior to this 3-day correction, the relative strength index (RSI) was hovering in the overbought zone. It has now settled back inside the neutral zone, hinting that the asset is no longer overpriced. BTC is presently sitting on top of healthy support.

IntoTheBlock’s In/Out of the Money Around Price “IOMAP” can help you visualize strong zones of support and resistance. As one can see, the $22,500 zone is solid. Previously at this level, 478,000 addresses had purchased 562,000 BTC coins.

If the sellers manage to break below this wall, the next healthy support zone lies at the 20-day SMA ($20,300). So, what’s dictating this short-term selling pressure? Well, let’s check out how the whales have been behaving.

As per Santiment, a behavioural analytics data provider, the number of addresses holding 1,000 to 10,000 BTC have been selling recently. While the actual number may seem less, the fact that these addresses contain between $22 million to $220 million worth BTC means that even the slightest of actions can have a lasting impact on the price.

Tesla CEO, Elon Musk, recently tweeted a meme that portrayed how the recent hype is alluring Bitcoin critics and antagonists to reconsider their stance on the digital currency.

The post sparked an interesting conversation between him and Michael Saylor, the founder and CEO of MicroStrategy. Saylor suggested that Elon could do his shareholders a favour by converting the Tesla balance sheet currency from the dollar to Bitcoin. According to him, if adopted by other S&P 500 companies, this move could transform the cryptocurrency space. 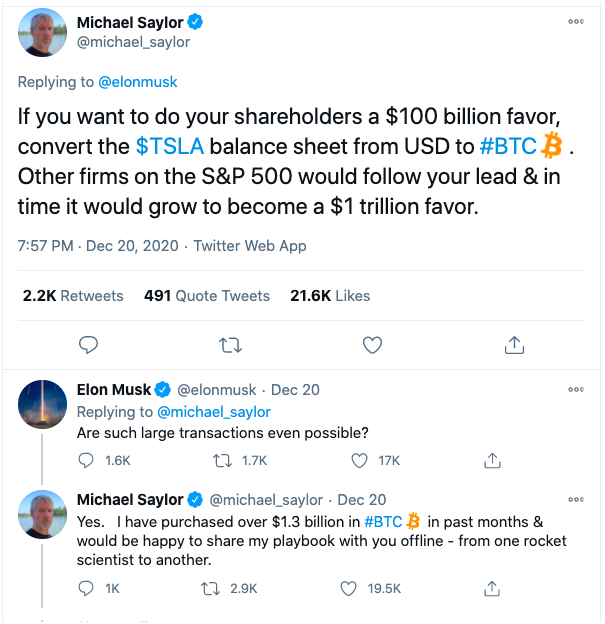 In response to this, Musk asked if large volume transactions are possible using BTC. Michael answered yes, citing reference to his over $1.3 billion worth of bitcoin transactions carried out in the past months.

In another tweet, Michael Saylor commented on the idea of working and earning in inflation-riddled fiat currencies only to invest the proceeds in riskier assets. According to him, the path to prosperity lies in BTC.

Strategists at JPMorgan Chase recently said that the odds of Bitcoin correction would increase if flows into the Grayscale Bitcoin Trust slow down dramatically. According to a Bloomberg report, a significant drop inflows into the largest Bitcoin fund would increase the likelihood of a price correction similar to the one seen in the second half of 2019. The report cited remarks made by the bank's quantitative strategists led by Nikolaos Panigirtzoglou.

The strategists added that Grayscale’s Bitcoin inflows “are too big to allow any position unwinding by momentum traders to create sustained negative price dynamics.” Recent data shared by Grayscale Investments showed that the firm reached $15.5 billion in digital assets under management on December 18 - up $2 billion in less than a month. The company’s Bitcoin Trust is now worth over $13 billion of that total.

With respect to previous warnings about gold losing its place to BTC, the latest findings identified a new “trend” formed by Grayscale, as per a Cointelegraph report. Exposure to Bitcoin could involve a person buying one unit of Grayscale while selling three units of the SPDR Gold Trust. JPMorgan’s strategists had said:

If this medium to longer-term thesis proves right, the price of gold would suffer from a structural flow headwind over the coming years.

Institutions To Favor Bitcoin and Gold Over Bonds – Weiss Ratings

Weiss Ratings recently explained why large institutional investors are likely to adjust their portfolio allocations by reducing government bond exposure in favour of Bitcoin and gold. In a recent article, the rating website pointed out that “government bonds are no longer the hedge against falling stock prices as they once were,” which is bad news for “for pension funds, insurance companies and other big-footprint investment companies.”

The article further noted that such large institutional investors “have roughly $100 trillion in assets”, which is invested around 30% in government bonds and 70% in equities. The allocation to bonds is intended as a hedge against stock market crashes. However, the article said that “the hedge doesn’t work anymore” due to zero (or negative) real yields on government bonds. Even if just 10% of the $30 trillion figure mentioned earlier moves out of government bonds and evenly goes into Bitcoin and gold, that means $1.5 trillion going into Bitcoin.

This allocation can potentially surge Bitcoin’s price higher and at a faster rate than gold.

Due to Bitcoin’s much lower market cap and trading volume, it has the potential to rise far faster than gold … as new money from disillusioned bond investors pours in.

Weiss believes that the other reason for Bitcoin outperforming gold in this scenario is Bitcoin’s limited coin supply. The article concluded by saying: