Bitcoin Price To Explode Beyond $100,000, Says An On-chain Metric

Bitcoin is likely to hit $100,000 mark, if history repeats with the market cap-to-thermocap ratio.

This week, Bitcoin was hitting the ground run for $50,000 but staled at $48,000 all of a sudden. The upswing was eventually followed by a reversal with a confirmation of new support at $44,000. Though the flagship cryptocurrency exchanges hands at $47,640, the resistance, which is at $48,000, is still in place and shows no signs of change. A unique on-chain metric states that BTC'S uptrend is still intact and can hit highs above $100,000.

This metric is described as a market cap divided by Thermocap, by Glassnode. In instances where Bitcoin is exchanging hands at a premium with the total security miners spend, the metric completely reveals it. It is also to be specifically noted that the resulting ratio is adjusted to account for an increase in circulating supply over time.

In particular, the bellwether cryptocurrency has rallied roughly around 135% in less than 30 years. An eminent analyst Rafael Schultze mentioned that, in the previous bull run, BTC exchanged hands at $8,500, whereas its market cap-to-thermocap ratio was still at the prevailing levels. This rapid rally by the significant cryptocurrency also indicates how dynamic the crypto market is and the plethora of possibilities for things to move fast overnight. Bitcoin could indeed have spiked to highs above $100,000 if it were to rally by the same 135%. 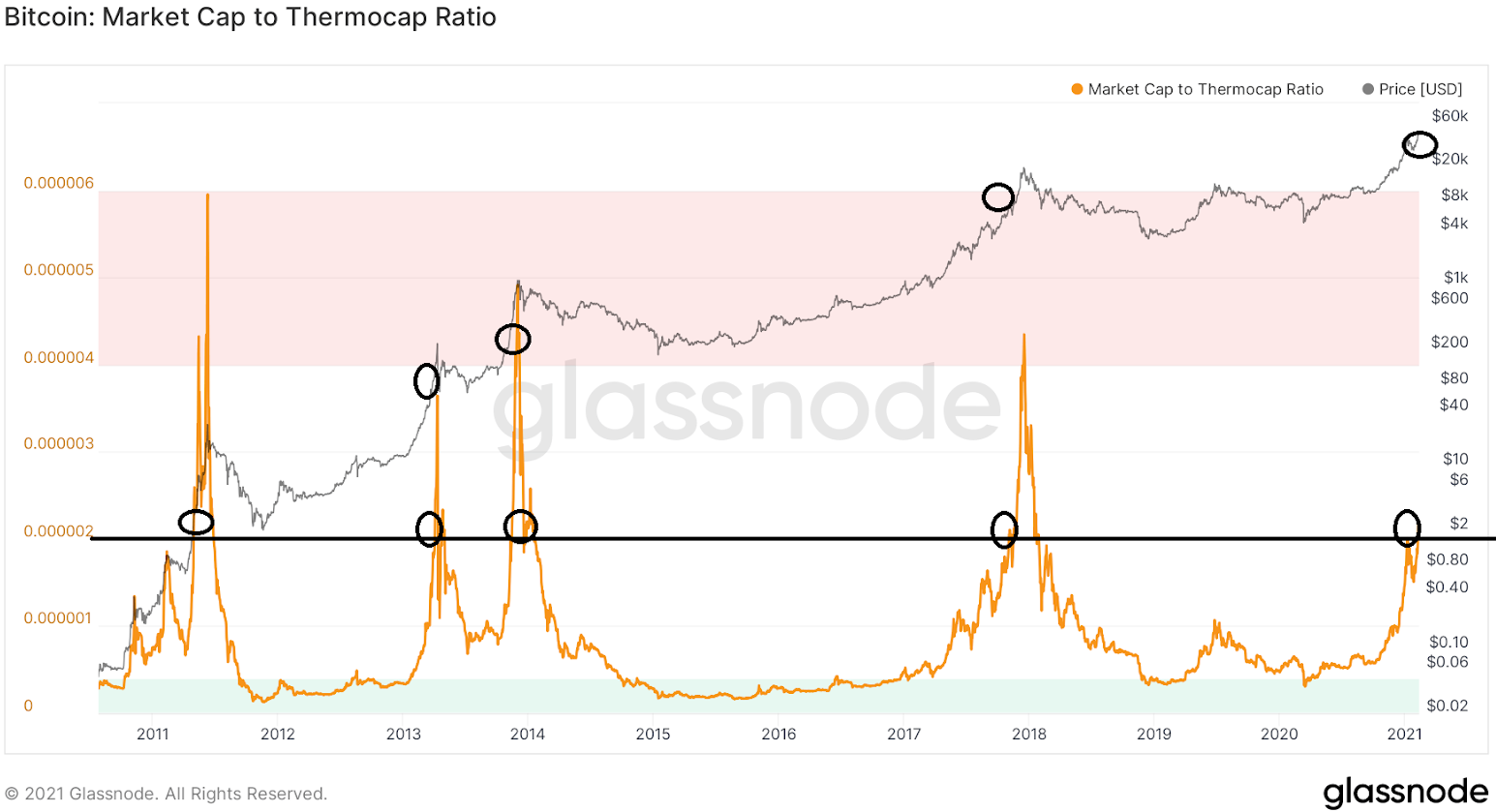 Santiment's NVT Token Circulation model also reinforces this bullish narrative as what this metric relates to is the change in the rise of the market cap to the tokens exchanged hands on the network. Besides the semi-bullish outlook over the five months, Bitcoin's NVT model is remarkably bullish at the moment.

Read Also: Why Bitcoin Is Going To Explode In 2021

Signing the proposal under the Multilateral Instrument passport system in different Canadian jurisdictions, the Ontario Securities Commission (OSC) has successfully approved the first Bitcoin exchange-traded fund (ETF) in North America. The duplication of BTC price action will be done without including the fund's fees and a few related expenses, as mentioned by a fact sheet shared by Purpose Investment. Furthermore, this Bitcoin ETF will not be mixed up in the speculation of short term price changes.

There is a chance in the United States considering a similar product as Canada has successfully approved the first Bitcoin ETF in North America. 2019 and the early days of 2020 have indeed witnessed the rejection of various proposals by the Securities and Exchange Commission (SEC). In the meantime, Hester Peirce, the SEC Commissioner, believes that the market is primed for a Bitcoin ETF.

"If we don't give them (investors) the natural way, which I think would be an ETP, they are going to look for other (less optimal) ways to do it."

Since January 28, the Bitcoin price has rallied from $30,300 to $48,500, gaining around $18,200 in its overall valuation. As things stand, the asset is still overpriced as seen by the relative strength index (RSI).

However, as the IOMAP tells us, the Bitcoin price is hovering above strong support levels. These levels are robust enough to absorb a tremendous amount of selling pressure. The closest strong support wall is at the $48,000-level, wherein 590,000 addresses had previously purchased 222,000 BTC tokens.

On The Other Side Of The Fence:

What happens if Bitcoin fails to overcome the resistance at $48,000 is a sudden increase in the selling pressure because eventually, the bulls will get exhausted. This pioneer cryptocurrency will be halted from driving further ahead with the support at $44,000. If retested, the chance of weakening is very high that might pull back the progress towards $40,000.

India To Continue Its Ban On Cryptocurrency Investment

The proposed complete ban on cryptocurrency in India will move ahead as planned. India is extremely adamant in its decision about letting its citizens engage in crypto-related activities. Nevertheless, the government is ready to give investors in India a transition period of over three-to-six months. According to Bloomberg Quint, the Indian bill will indeed have some exceptions:

"The Bill also seeks to prohibit all private cryptocurrencies in India; however, it allows for certain exceptions to promote the underlying technology of cryptocurrency and its uses."

The Indian parliament is all set to impose the ban and prohibition of any engagement with cryptocurrencies. Transactions with foreign exchanges will also be included in this ban.

India is one of the world's most populated countries and has quite many people who engage in cryptocurrency trading and other businesses. Bitcoin may soon suffer under heavy selling pressure, and this will all depend on how soon the complete ban ascends to law. Though there is a transition period, this will only provide limited time for people to sell their digital assets, which will negatively affect Bitcoin and hinder the projection to $100,000.

5 Reasons to Invest in Bitcoin

5 Top Cryptocurrencies That Could Make You A Millionaire

What Is Bitcoin? A Beginner's Guide