Bitcoin Technical Analysis: Bears in control as BTC slips below $18,000

Following rejections at the 20-day SMA, BTC has been on a major downturn. Over the last two days, the premier cryptocurrency has dropped from $18,650 to below $18,000. Will holders continue to sell off their tokens or are we going to have a bunch of new addresses leveraging this moment as a stepping in point? Let's take a look.

With MACD (moving average convergence/divergence) showing that the market momentum is presently overwhelmingly bearish, further downside movement can be expected.

As you can see, BTC/USD has flashed the sell signal in the weekly chart with a green-nine candlestick in the TD sequential indicator. Along with that, the relative strength index (RSI) is trending above 70, signifying that the asset is currently overpriced. Both these indicators show that the price is going to go for a drop.

To add further credence to our negative hypothesis, the two latest candlesticks have formed a “bearish engulfing” pattern. As per Investopedia, a bearish engulfing pattern indicates lower prices to come and is composed of an up candle followed by an even larger down candle.

So, how far is the price going to drop? For that, let’s check the daily chart. 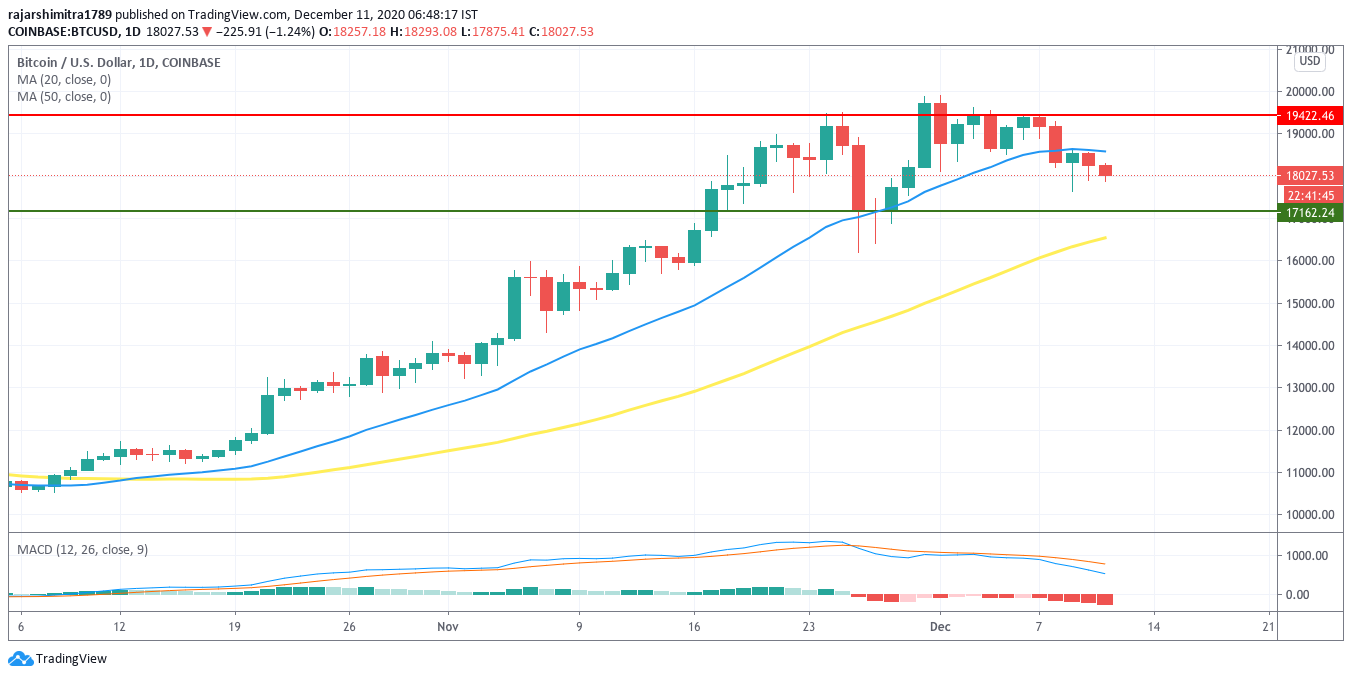 Despite bearish price action, Bitcoin is still exploring multiple use cases and finding institutional support. All this has a long-term positive effect on the premier cryptocurrency. Let’s go through these stories one-by-one.

In a bid to bypass US sanctions, Venezuela plans to maximize Bitcoin payments for imports, as per a RunRun.es report. Venezuela’s central bank officials have reportedly claimed that “payments to companies from allied countries such as Iran and Turkey have been made using Bitcoin.”

The Venezuelan government has promoted its “Petro” cryptocurrency as a means of exchange (both internationally and domestically) for a few years now. However, the poor adoption of Petro has forced citizens to turn to other assets like Bitcoin and Ethereum.

In September, the country’s President Nicolás Maduro started to publicly threaten the use of cryptocurrencies as a means to bypass sanctions. He stated that his administration would soon “use all the cryptocurrencies in the world, public, state, or private, for internal and external trade.”

In November, the government established its “Digital Assets Production Center” - a Bitcoin mining warehouse - as the country increased its reliance on digital assets. A few days back, the government launched its cryptocurrency exchange to allow citizens to exchange Bolivars for Bitcoin. The exchange is backed by the National Cryptoactive Superintendency.

Banking giant JPMorgan Chase believes that if Bitcoin continues its upward movement, then many investors are likely to sell their gold and buy BTC instead. This would mean increased capital flow from gold to Bitcoin. Notably, this is a situation that could keep for years rather than a short span of time.

According to a BNN Bloomberg report, JPMorgan’s strategists said:

If this medium to longer-term thesis proves right, the price of gold would suffer from a structural flow headwind over the coming years.

The strategists also considered the possibility that Bitcoin could have reached a local top and it might be time for it to retrace or correct. Meanwhile, gold could experience a recovery in the next few days.

Fidelity Digital Assets has recently partnered with BlockFi to let its institutional customers pledge Bitcoin as collateral against cash loans. Although Fidelity offers various cryptocurrency services, this is the first time its customers will be able to use BTC as collateral.

Due to Bitcoin’s price volatility, loans will be backed at a loan-to-value rate of 60%. To access this service, customers need to have a BlockFi account. Tom Jessop, president of Fidelity, said that using Bitcoin as collateral for loans is “a fundamental capability.” He added that this practice will likely become “a fairly important part of the ecosystem” as markets grow.

Jessop further noted that the new service is aimed at Bitcoin investors who want to turn their BTC holdings into cash without selling. Based on a 60% loan to value ratio (LTV), potential customers for this loan service include hedge funds, cryptocurrency miners and over-the-counter trading desks.