The Bitcoin price has finally broken below the $48,000 support. This has been a major win for the bears and it could have some very ugly repercussions for the users. Let’s take a closer look with technical analysis.

Since February 22, the Bitcoin price has dipped from $57,500 to $47,300, losing more than $10,000 in its overall valuation. In the process, the premier cryptocurrency managed to flip the 20-day SMA from support to resistance.

Flipping the 20-day SMA was crucial for Bitcoin price as they managed to gain a strong resistance at $49,200, wherein over a million addresses had purchased around 590,000 BTC tokens.

MicroStrategy Purchases US$1 Billion Worth Of BTC

MicroStrategy CEO Michael Saylor said the company is focused on growing its enterprise analytics software business as well as acquiring and holding Bitcoin. He added that the recent investment solidifies the firm's "belief that bitcoin, as the world’s most widely adopted cryptocurrency, can serve as a dependable store of value." Just a few days back, Square also disclosed its new $170 million investment in BTC.

We believe our bitcoin strategy, including our bitcoin holdings and related activities in support of the bitcoin network, is complementary to our software business, by enhancing awareness of our brand and providing opportunities to secure new customers.

Blockchain analysts have recently identified a transfer of 100 BTC from two wallets that had laid dormant for over a decade. The addresses had each only received a 50 BTC Coinbase reward nearly 11 years ago. Apart from this, two incoming transactions worth just 0.00000547 BTC each were sent to the wallets in the last six months.

Notably, these two addresses belong to the same owner. The two blocks were mined only a couple of hours apart on June 10, 2010. Based on Bitcoin’s current value, the coins have a combined value of nearly $5 million. With BTC trading for $0.08 when the coins were mined, the whale’s holdings appear to have increased in value by 622,500 times. 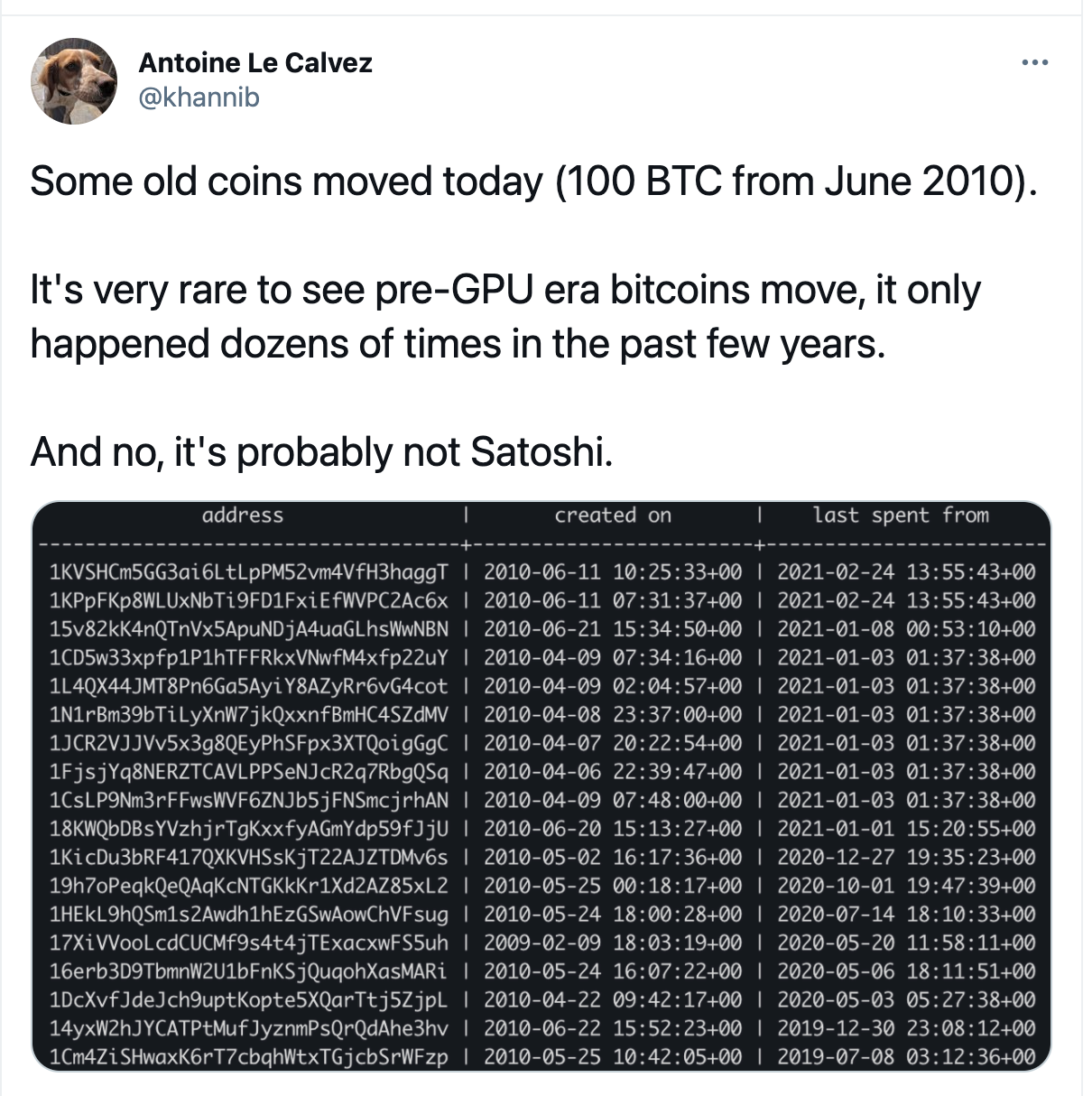 About half of the coins were moved to a wallet belonging to the German P22 exchange Bitcoin.de. For now, the remaining coins are sitting in a newly created legacy address.

The coins, mined in blocks 60365 and 60385, are unlikely to belong to Satoshi Nakamoto, who is known to have mined at least 1.1 million BTC. The movement of 2010 era coins is an uncommon occurrence. Only 18 transactions involving BTC with inputs from July 2010 or before have been identified in 2021 so far.