Bitcoin bulls have remained in control for five consecutive days, but it looks like they are running out of steam. Many analysts are predicting BTC to breach $20,000 sooner rather than later. However, looking at how the whales have been behaving, it seems like the premier cryptocurrency is bound for a short-term correction before it rebounds back up.

BTC bounced up from the $18,000 support line and managed to flip the 20-day SMA from resistance to support. If the price gets repeatedly rejected at the $19,500 resistance, the bulls will hope for the 20-day SMA to hold strong.

The moving average convergence/divergence (MACD) shows that the market momentum was going to reverse from bearish to bullish, however it has flatlined for now. Looking at the 4-hour chart, we can see that the price has been rejected twice at the $19,500 barrier.

During the first rejection, the price dropped to $17,600 before it managed to bounce up from the support at the 200-bar SMA. The price will hope for the 20-bar SMA to hold firm

Whales dump their coins while new investors rush in 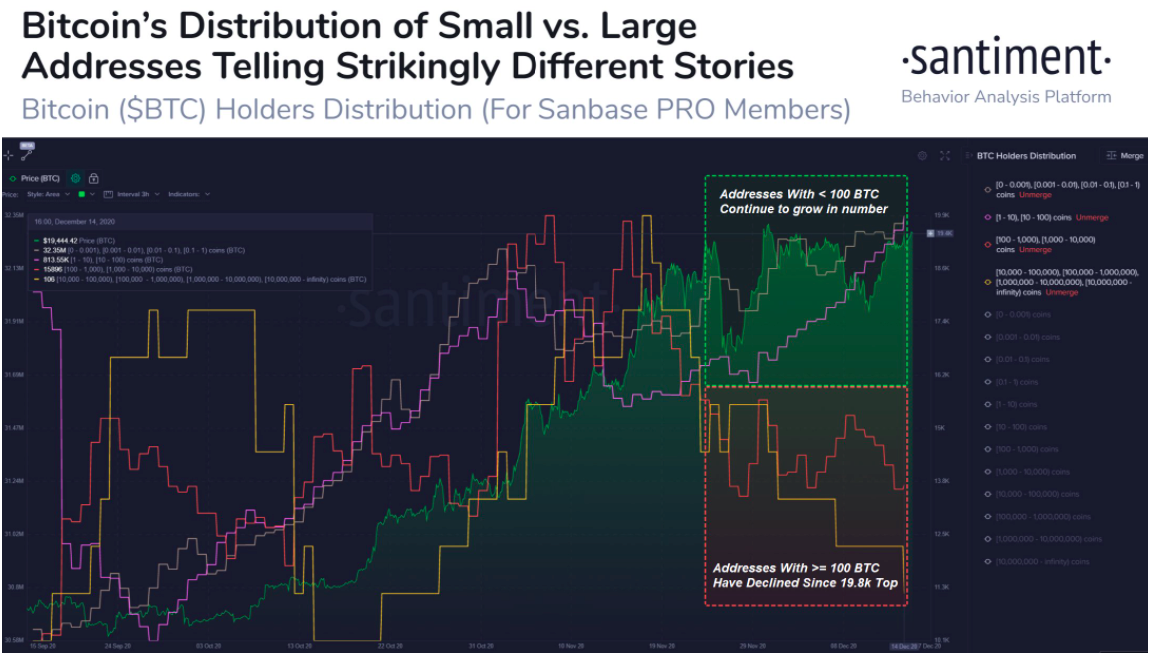 The change in number of addresses for each tier are:

So, it looks like the whales are selling off their tokens to pocket a profit. Most of them are probably investors who bought in during the end of 2017 at similar price levels. However, it also looks like BTC’s current price action has prompted many new investors to buy the digital asset.

This is both positive and negative news. New addresses flowing in is always a good thing. However, the whales applying selling pressure doesn’t bode well for Bitcoin.

Payments giant PayPal’s stock reached record highs recently. It seems to be outperforming the broader US market. Since November 12, PayPal holdings have gained a whopping 17% while the technology-focused Nasdaq has gained around 6.5%. The broad S&P 500 Index of large-cap stocks is up 3.5% over the same period.

PayPal launched crypto trading for US customers on November 12. Some analysts have even speculated that a higher Bitcoin price could have a positive effect on PayPal’s prospects. According to a report cited by Bitcoin.com, Paypal stock bulls are expecting online “penetration of total retail spending to continue growing this holiday shopping season during the coronavirus pandemic.”

The report quoted Bryan Keane, an analyst at Deutsche Bank:

A recent PYPL survey revealed 54% of PYPL users have an interest in its crypto offerings and we believe there has been strong interest in demand thus far. Even more powerful is the frequency of visits to the PYPL commerce portal from crypto users, which will lead to higher customer engagement and more monetizable transactions.

While PayPal’s stock was soaring high, Bill Barhydt, the CEO of Abra tweeted that demand for Bitcoin on PayPal alone now exceeds the daily supply of new coins.

Paypal (alone) now fulfils more bitcoin demand than the amount of bitcoin created daily. (In) 2021 or 22 will highly likely see a retail bitcoin ETF. Demand will likely go up 100x at that point. While I discourage using Paypal to buy bitcoin ( Abraglobal is the way) …wow.

Payments for Pornhub’s premium services can now only be made through cryptocurrencies. Back in September, the popular adult web portal had enabled payments through Bitcoin and three other digital assets.

Cryptocurrency community members seem to be thrilled at the news. A Redditor wrote:

Bitcoin getting more popular with the affluent

Bitcoin appears to be getting more popular among the affluent population. Christian Armbruester, as an investor for wealthy clients, has admitted that he’s realizing the value and potential of digital assets. Armbruester is the founder of Blu Family Office in London.

Armbruester noted that he’s overlooked cryptocurrencies until this year after the asset’s impressive surge of over 160% since mid-March. It skyrocketed from the $4000 range to the current $19,000 levels in a matter of months. Armbruester added that he’s only been focused on precious metals and manufacturing so far.

In a recent interview, the investor said that everyone should be looking at Bitcoin as a necessity. In 2020, several institutional investors (such as MicroStrategy and Square) have invested millions of dollars in Bitcoin. Additionally, several investment offices are now looking to find ways for their clients to invest in digital currencies either directly or indirectly.

[This] tells us that bitcoin has caught the attention and imagination of many people, but it’s still untested and a pretty small market relative to other markets.