On Wednesday, January 20, the Bitcoin price managed to flip the 20-day SMA from support resistance and dropped from $36,000 to $31,000. Since then, the price has moved horizontally below the $33,000 level. Let’s take a closer look with technical analysis.

As things stand, the $31,250 support level is crucial since it makes sure that the Bitcoin price isn’t going to go through a catastrophic downfall. However, the MACD shows that the overall market momentum is increasingly bearish. So, it would be pretty likely that this support wall is going to be regularly tested.

IntoTheBlock’s IOMAP further shows us the importance of this level. As you can see, if the price manages to break below this zone, BTC may reach as low as $28,000.

However, the 4-hour price chart shows us that such a wild price drop may be unexpected since the candlesticks are currently sitting pretty on top of the 20-bar and 200-bar SMAs. However, as with the daily chart, the overall sentiment in the 4-hour chart is also bearish. As you can see, the parabolic SAR has reversed from bullish to bearish this Sunday.

Tether Playing A Key Role In Bitcoin Price Staying Above $30,000

Santiment, an on-chain analytics platform, shared an interesting chart that tells us that Tether inflows have managed to keep BTC above $30,000. 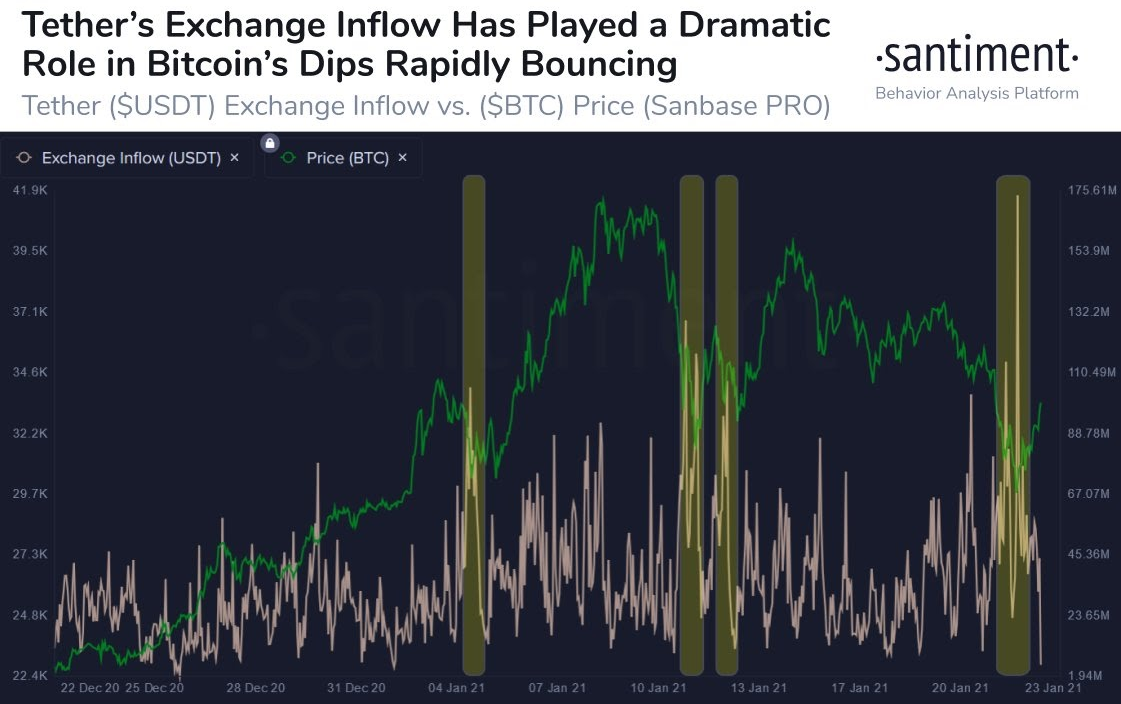 The buyers have promptly scooped up the recent Bitcoin price dumps to keep the premier crypto above $30k. Their latest insight studies show how Tether's exchange inflow plays a decidedly essential role in identifying dip buy opportunities by watching $USDT.

BlackRock Looking To Adopt Bitcoin Next

BlackRock, one of the world's largest investment corporations, recently said that it might incorporate Bitcoin futures in some of its funds. With more than $7 trillion worth of assets under management (AUM), BlackRock is a pacesetter for the financial sector.

Investing in Bitcoin futures is not the same as investing in cryptocurrencies. Futures allow for bets on an asset’s price without a direct purchase. However, the crypto space is excited about the new move.

According to a Decrypt report, Alex Wearn, the CEO of the crypto exchange IDEX said:

[Blackrock is] another addition to a long list of institutions that previously dismissed Bitcoin but are now building the legal and operational foundation to trade it. This decision signals demand from their clients to invest in Bitcoin, and that the asset and crypto as a whole are becoming more broadly accepted as an investable asset class.

Back in 2018, BlackRock CEO Larry Fink said that their customers weren’t interested in cryptocurrencies. “I don’t believe any client has sought out crypto exposure,” he had told Bloomberg. However, in November, CIO Rick Rieder said in an appearance on CNBC that “crypto is here to stay.”

The new SEC filings don’t clarify if or when the company will embrace Bitcoin. Still, the fact that they’re allowing for futures trading is hope enough for many community members.

US President Joe Biden recently picked Janet Yellen to serve as the Treasury Secretary. In an earlier virtual hearing of the US Senate Finance Committee, Yellen was asked how she would respond to “emerging financial technology” being used to fund criminal organizations and terrorists. She had replied that crypto was a “growing concern” in the US as they were used “mainly for illicit financing.”

However, her views on crypto may not be as bearish as those remarks indicated. Yellen published a written statement on the Senate Finance Committee website recently. She noted that while one must curtail crypto usage for illegal activities, she plans to encourage the use of digital assets for “legitimate activities.”

I think it important we consider the benefits of cryptocurrencies and other digital assets, and the potential they have to improve the efficiency of the financial system.

Yellen also said that she wanted the US to be a “leader in the digital asset and financial technology areas.” She added that she would help develop a regulatory framework for cryptocurrency and other fintech innovations” by working with the Federal Reserve Board.

Yellen served as the Federal Reserve chair under US President Barack Obama and has remained silent on her views regarding the crypto space since calling Bitcoin "anything but useful" in October 2018.

With multiple indicators (MACD and parabolic SAR) flashing bearish signals, it appears like the Bitcoin price may test critical support levels. If BTC breaks below this $31,250, it may reach as low as $28,000.