Bitcoin price is currently consolidating below the $47,000-mark after BTC hit a new all-time high on Monday following the Tesla news. Let’s take a closer look with technical analysis.

Since January 28, the Bitcoin price has jumped from $30,600 to $46,550. It seems like BTC has now faced a slight sell-off around the $47,000 area which has prevented further growth. Also keep in mind that the relative strength index (RSI) is presently trending in the overbought zone, which could trigger a potential correction.

Also note that Bitcoin price in the 4-hour chart has flashed a sell signal in the form of a green-nine candlestick. This could trigger a bearish correction. The MACD also shows steadily decreasing bullish momentum. 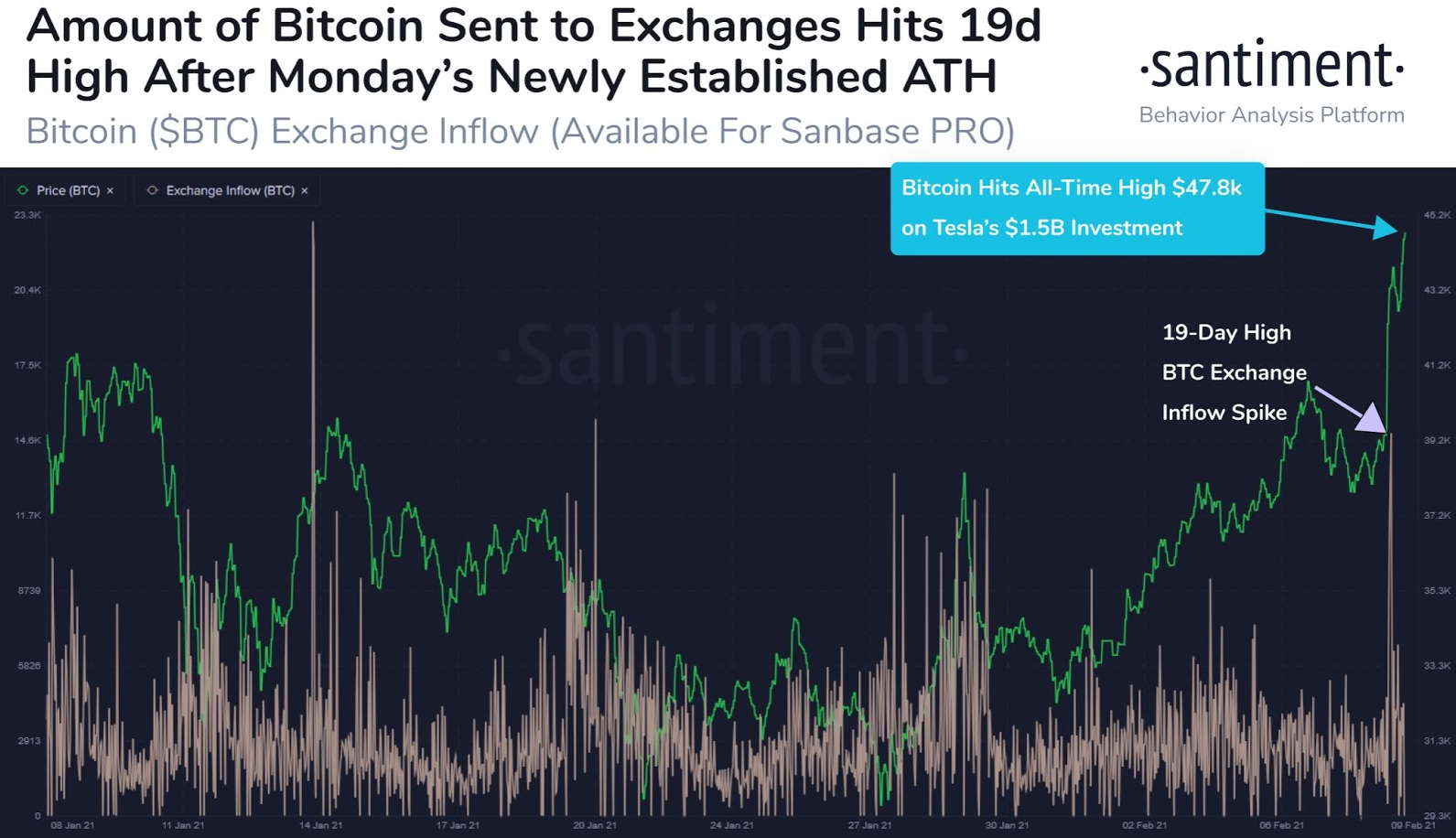 With Bitcoin price surging to new heights on Monday, it seems like certain investors took advantage of this to pocket a quick profit. Looking at the chart, the number of BTC flowing into the exchanges reached a 19-day high.

Popular electric vehicle company Tesla recently revealed that it acquired Bitcoin worth over $1.5 billion for its treasury. Soon after the news broke out, the market valuation of Bitcoin briefly exceeded that of Tesla.

After Tesla filed its annual report with the US Securities Exchange Commission (SEC) revealing the purchase of Bitcoin, the price of the flagship crypto surged to a new all-time high of $44,801. Naturally, Bitcoin's market value increased as well, reaching $834.2 billion. This resulted in Bitcoin overtaking Tesla as the seventh most valuable entity by market cap ($820.7 billion).

However, BTC dropped some of its gains over the span of 24 hours, letting Tesla reclaim the seventh spot. Bitcoin, now in eighth place, is still ahead of Facebook ($756.4 billion).

After Tesla’s whopping $1.5 billion investment in Bitcoin, the crypto community is now speculating which major tech giant will follow suit. According to Bloomberg's client note, RBC Capital Markets has urged Apple to create a Bitcoin exchange platform and acquire some BTC.

As part of the note to investors, RBC Capital Markets argued that Bitcoin investment would be more astute than getting into the electric vehicle (EV) market, adding:

The wallet initiative appears to be a clear multi-billion dollar opportunity for the firm (potential for well over $40 billion in annual revenue with limited R&D).

Rumors about Apple pivoting into the EV market took a hit recently when both Hyundai and Kia dismissed the reported negotiations with Apple. RBC’s note comes when EV manufacturing giant Tesla has acquired $1.5 billion in Bitcoin with plans to potentially accept BTC as a means of payment for its products. The news pushed the price of Bitcoin beyond its previous all-time high, setting a new record above the $44,000 mark.

To RBC, the successes of Coinbase, Square, and PayPal's entities show the viability of the Bitcoin exchange platform model. To ensure an Apple crypto exchange's success, RBC added that the company should convert part of its cash reserve to Bitcoin. According to RBC, such a move would incentivize greater utility for the platform and help boost the price of Bitcoin.

Bitcoin price will likely consolidate between $47,000 and $42,500 for a bit before the buyers finally gain the momentum required to shoot past the $50,000-mark.