On April 26, the Bitcoin price bounced up from the $49,000 support wall and reached $55,000 over the next day. However, after two straight bullish days, BTC faced immediate correction over the next two days, falling below the $53,000 psychological level. 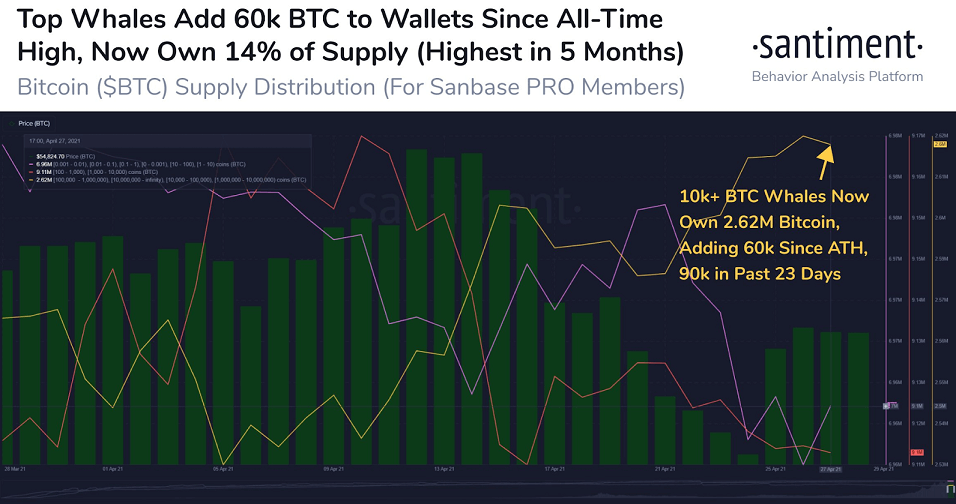 "The uber large #Bitcoin whale addresses (holding 10k+ $BTC) continue to get richer and accumulate as prices range, particularly after the #AllTimeHigh two weeks ago. Around 90k $BTC ($4.92B) has been added in total to these addresses since April 5th."

Crypto investment firm Pantera Capital recently revealed a pricing model for Bitcoin that places the crypto asset at new levels. In the company’s April letter to investors, Pantera said that one of their models, which compares the amount of new Bitcoin users to the token's price, indicates a terminal price of $700,000.

According to the model, BTC’s price goes up by $200 for every 1 million new Bitcoin users. Pantera Capital noted the model has been accurate every time so far except in February 2016, when the price lagged.

If Bitcoin’s price continues to rise $200 every time a million users enter the market, the model suggests that BTC can surge nearly 1,200% from its current value of $54,000.

3.5 billion people have a smartphone, the only requirement to use Bitcoin. In the long, long run – it’s not obvious why most of those won’t use bitcoin. That’s not many more than share photos on Facebook.

Using these relationships, we can postulate a possible terminal value for bitcoin. If the price continues to rise $200 per million users, Bitcoin would become fairly valued at $700,000. At that level, Bitcoin would be worth $15 trillion – or 15% of global M2 (money supply). That seems totally doable.

Pantera isn’t just bullish on Bitcoin. The firm has also been watching the rest of the non-Bitcoin+Ethereum market share. Pantera mentioned that the best opportunities are likely to be found outside of BTC and ETH as the rest of the industry is making gains against the two biggest crypto assets by market cap.

The non-Bitcoin+Ethereum market share has more than doubled, from 16% to 34%, in the past three months. Watch this space. That’s where the largest gains are likely to be. 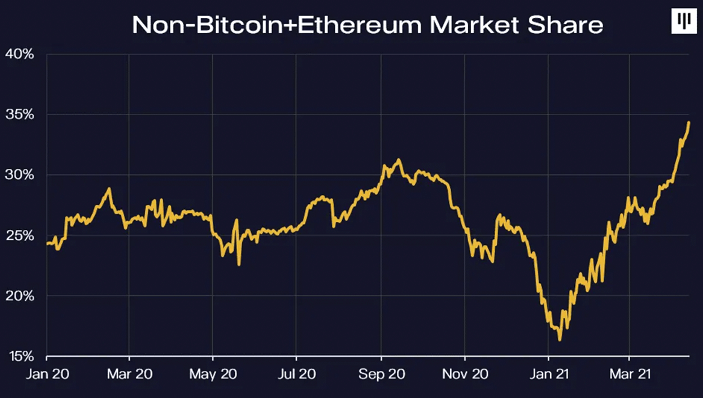 The Bitcoin price is falling towards the $50,000 support wall as the bears have taken full control. The buyers will need to shoot the price above the 50-day and 20-day SMAs to gain two powerful price levels and prevent further price crashes.