Bitcoin bears have remained in control for the fourth straight day. During this stretch, the price of Bitcoin has dropped by $40,000 to $34,250, losing nearly $5,750 in valuation. Let’s look at how things are behind the scenes.

During this crash, the price has dropped below the $40,000 and $35,000 psychological levels. Due to this crash, the market momentum has reversed from bullish to bearish, as evidenced by the moving average convergence/divergence (MACD).

As per IntoTheBlock’s IOMAP, the price of bitcoin could drop to $31,000 before meeting significant support. Previously at this level, 350,000 addresses had purchased 262,000 BTC tokens.

Are The Bulls Going To Recover Prices?

Looking at the 4-hour chart, one can see that the 4-hour chart managed to reverse the parabolic SAR from bearish to bullish. The relative strength index (RSI) is hovering along 42.45. This shows that the buyers are ready to shoot the price up if they regain momentum.

The 4-hour chart has flashed a buy signal with a red-nine candlestick in the TD sequential indicator in this same timeframe. After flashing this sign, the price jumped from $31,450 to $35,500 before encountering resistance at the 50-bar SMA.

$2.4 Billion Worth of Bitcoin And Other Coins Liquidated in One Day

Cryptocurrency assets (Bitcoin, Ether, XRP, and other tokens) worth over $2.4 billion have been liquidated on derivatives exchanges in one day, according to Bybt. This comes after Bitcoin price collapsed to its one-week low of $33,447 recently on the Bitstamp exchange. 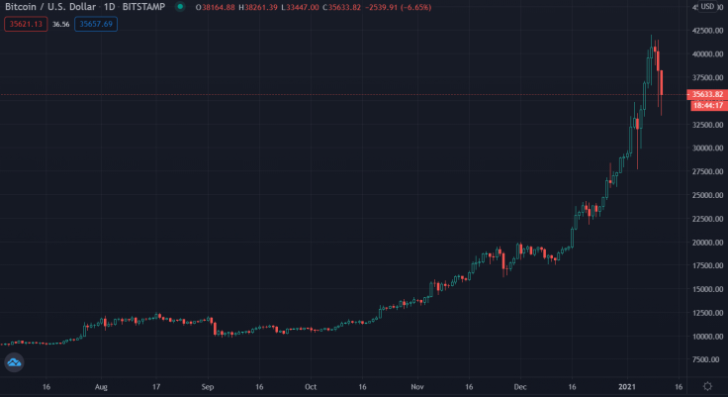 Bitcoin was down 20.5% from its all-time high of $42,000 (on January 8). Altcoins have experienced even a more significant blow, with Ether (ETH) plummeting to $1,010 after falling short of tumbling its long-standing all-time high of $1,448.

According to a Bloomberg report, Luno’s Vijay Ayyar said that this could be the start of a much steeper correction.

It’s to be determined whether this is the start of a larger correction, but we have now seen this parabola break so it might just be.

Gab Promotes Bitcoin As the Platform is Swamped By Trump Supporters

The platform runs its own servers and has managed to get an unbannable mobile app through Mastodon, according to a Trustnodes report. As Parler got banned from Google, Apple and Amazon recently, the platform’s users (largely comprised of conservatives) have little choice but to try Gab.

As Gab was banned from many platforms in 2018 (including payment processors), it doesn’t have mainstream services like Amazon cloud. The platform adopted Bitcoin and in a bid to emerge as Twitter’s alternative, Gab is currently taking time to inform their users about the whereabouts of BTC. “Bitcoin is free speech money,” it said. The company added:

Increasingly businesses and individuals are being cut off from traditional payment processing, banks, and more online. This includes Gab.com and our founder Andrew Torba, who have both been blacklisted by VISA as well as payment processors like Paypal. Bitcoin solves this problem.

As far as Bitcoin is concerned, around 70 million Trump voters moving to Gab might increase Bitcoin awareness. The platform is explaining how users can use it to support platforms that are now providing them an avenue to engage in public debate.

One of the largest banks in the UK, HSBC, will not allow Bitcoiners to cash out their gains following the asset’s record-breaking rally, as per The Times report. Meanwhile, other major banks are refusing to accept credit cards for cryptocurrency purchases.

For many years now, many banking enterprises in Britain have been against cryptocurrencies. According to an earlier U.Today report, HSBC and Barclays blocked a UK cycling merchant's accounts after he made a transaction to a cryptocurrency exchange.

Concerns over money laundering are largely cited as the reason behind their reluctance to deal with virtual assets. However, Danny Scott, the CEO of cryptocurrency exchange CoinCorner, says that traditionally hostile British banks are now warming up to Bitcoin.

We haven’t had any banks refusing or making it difficult for our customers to liquidate their bitcoin for a while now. I think banks are becoming more comfortable with bitcoin — as long as the source of those funds is clear, there are no issues.

The most crucial level to watch for Bitcoin is the 50-bar SMA ($36,000) in the 4-hour timeframe. If the buyers manage to break past this level, they will reverse the negative momentum in the short-term. On the downside, if the bears negate this short-term bullish correction, they will be able to take the price down to the $31,000 support barrier. The buyers need to defend this level at all costs to prevent a break below $30,000 per bitcoin.