Bitcoin Technical Analysis: BTC Drops By $14,600 Since May 9

Between May 9 and May 17, the Bitcoin price has dropped from $58,600 to $43,500 – losing almost $15,000 in its overall valuation. Since reaching a high in mid-April, BTC has been on a constant downtrend. Let’s take a closer look with technical analysis.

The Bitcoin Price Bounces Up From Support

Following this steady down, the buyers managed to take control this Tuesday and bounced up from the $43,000 support to reach $45,120. Before this jump, the relative strength index (RSI) was dipping towards the oversold zone before it diverged away. The MACD shows increasing bearish market momentum.

Bitcoin Price On Course With PlanB 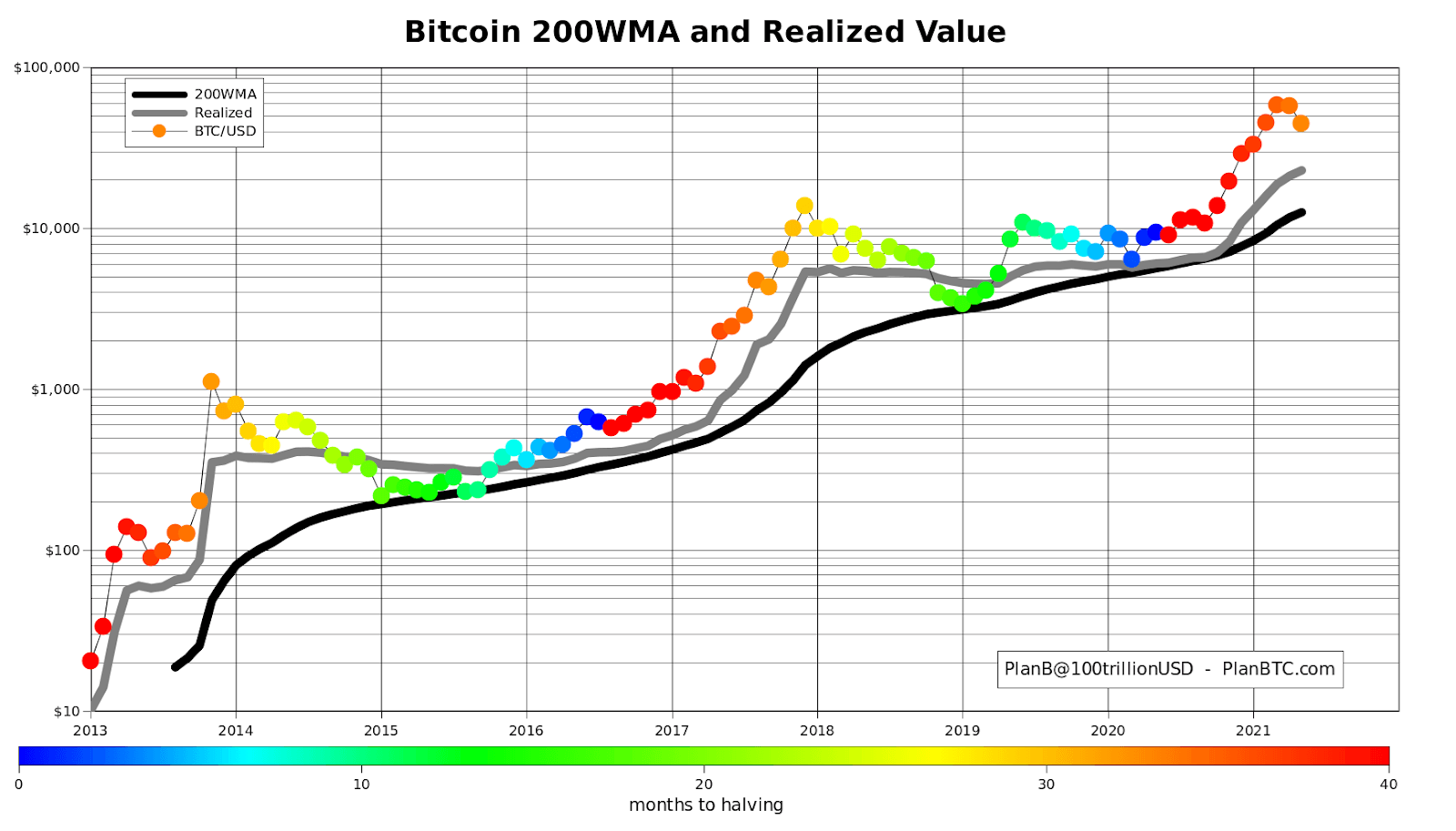 PlanB is a well-known analyst who made the STF model which predicts that Bitcoin Price will reach $100,000 by the end of 2020. As things stand, he believes that the price is still moving according to his predictions. 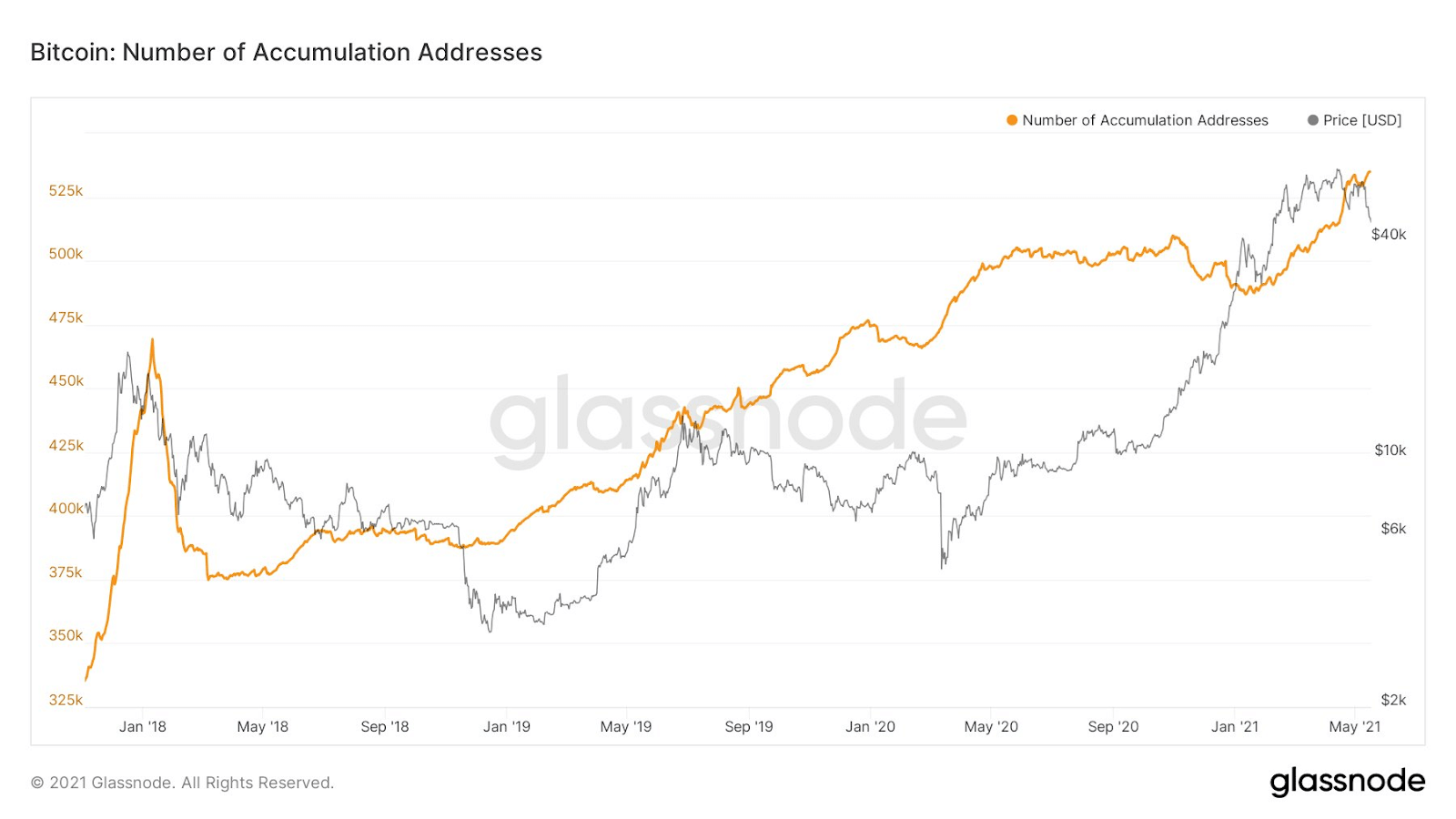 It seems like the number of pure accumulation addresses is on the rise. Here is another chart from Glassnode: 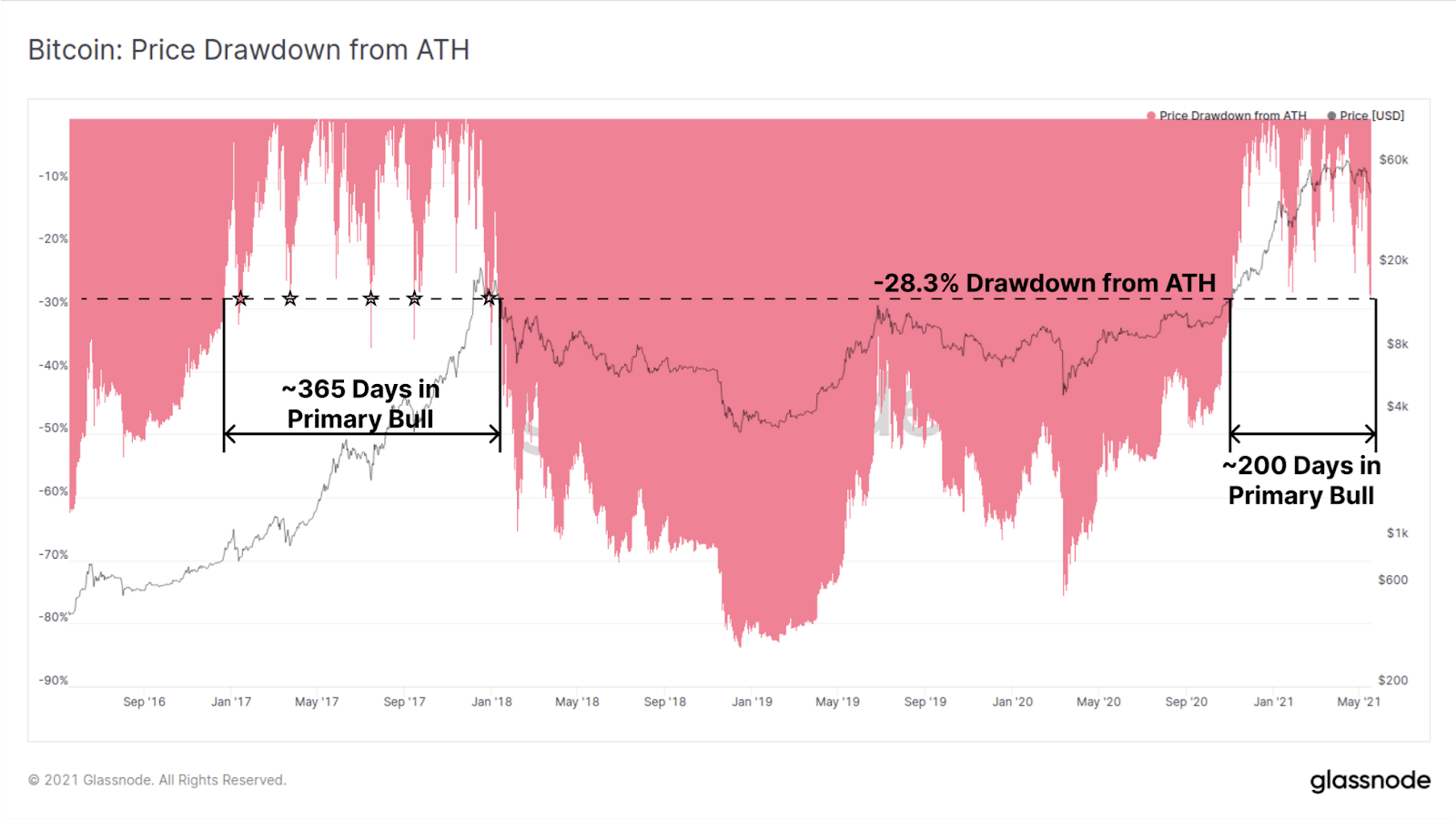 “This is the deepest correction of the current bull market, however is consistent with five major pull-backs during the 2017 bull. In terms of bull market duration, the 2021 primary bull (where new ATHs are set frequently) has run for around 200-days, which is relatively short compared to the year long bull run in 2017.”

“Newer market entrants have panic sold and realised significant loses on their coins, with both the aSOPR and STH-SOPR dipping below 1.0 once again. Both of these metrics consider the degree of profit realised by coins moving on-chain, with higher values indicating profitable coins were on the move, and values below 1.0 indicating most coins were last moved at higher prices.

The aSOPR metric considers the entire market, whilst also filtering out all coins with a lifespan less than 1hr (which are generally temporary hops and thus economically unimportant). The STH-SOPR filters for only coins younger than 155-days and is therefore representative of entities who bought coins during the current bull market cycle.

Both metrics have fallen below 1.0 indicating aggregate losses have been realised on-chain, an effect most pronounced in the STH-SOPR. This is the second major dip below 1.0 for STH-SOPR during this correction, suggesting widespread panic selling by new holders.”

BTC Deposits On The Rise 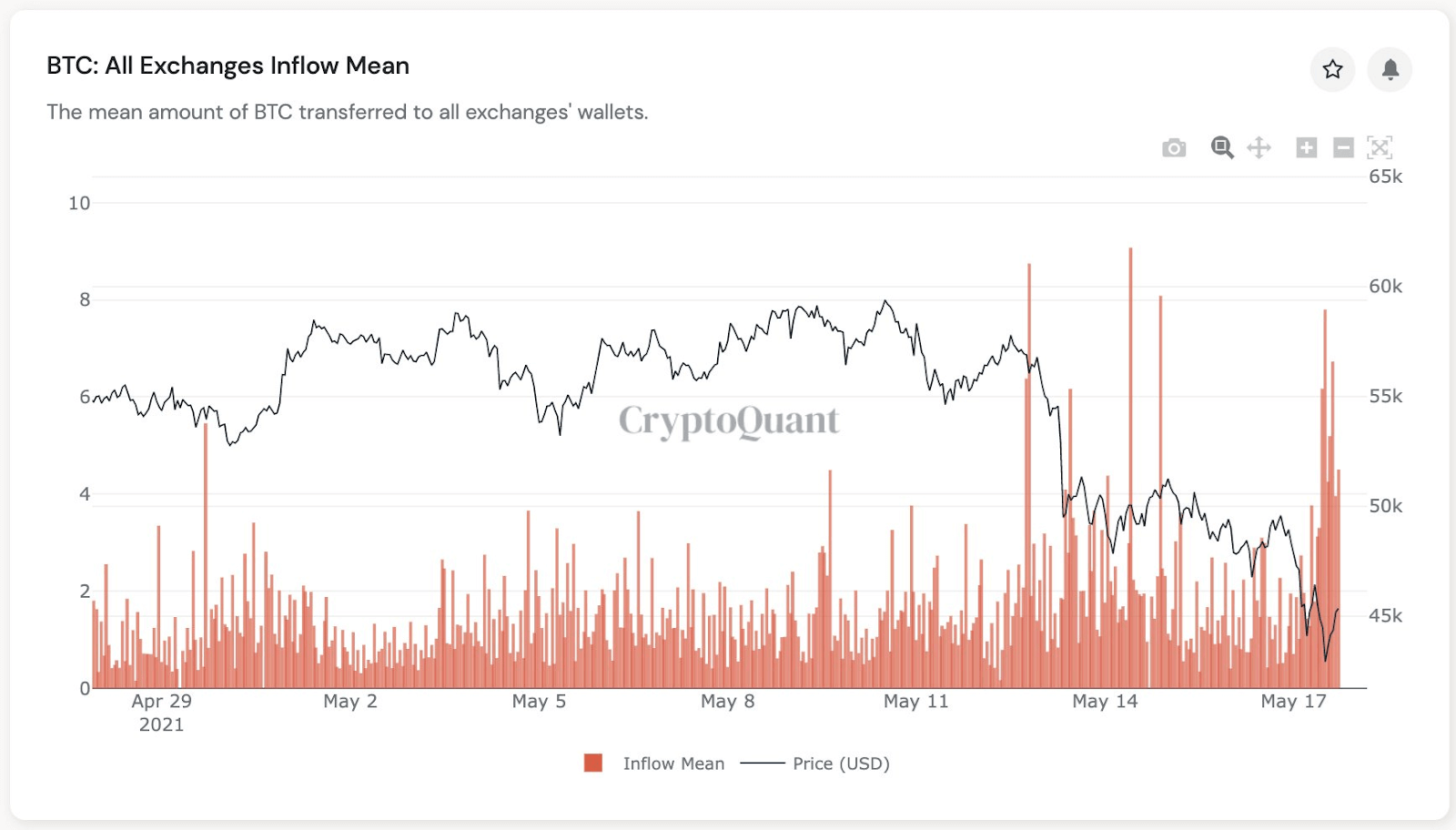 "$BTC seems likely to consolidate in a wide range or be bearish in a few days. The average amount of $BTC deposits is significantly increasing again. This is a pretty unusual situation. Don't take too much leverage on your longs. Be careful."

Samsung recently announced that its Galaxy devices will now support third-party wallets used to store and manage cryptocurrencies. As per a press release, Samsung Galaxy smartphones will now be able to transfer and store assets on crypto cold wallets onto the Samsung blockchain wallet available on the devices.

Samsung‘s recent move is very beneficial for crypto holders to easily access and store their tokens from their phones while also receiving information through an app. This is not the first crypto-related move made by Samsung. The firm had added the official Bitcoin emoji to its keyboard and created its official in-built crypto wallet as well.

Now, users of wallets like the Ledger Nano S and the Ledger Nano X do not have to choose between using their traditional crypto wallets or their Samsung devices. Instead, they can integrate the two.

More smartphone manufacturers are likely to follow Samsung's suit to keep up with the competition. This means more options for crypto users around the world and more opportunities for crypto-related firms like Ledger to partner with more mainstream institutions for the benefit of the industry.

MySpace founder Tom Anderson recently took to Twitter to post a photo of himself with laser eyes in an apparent show of support for the embattled Bitcoin community. The image was captioned “Buying the Dip.” 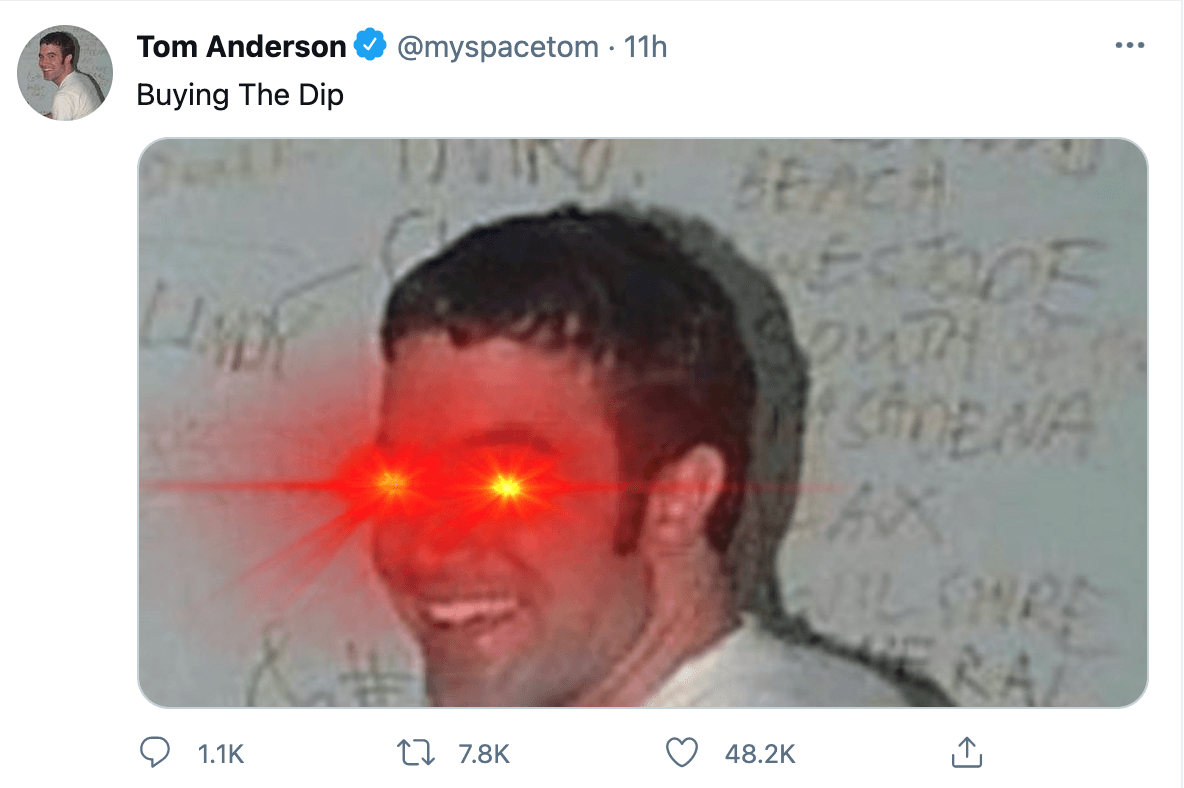 Earlier, Bitcoin crashed to $42,185, its lowest level since early February 8. According to earlier reports, Tesla CEO Elon Musk implied that the e-car manufacturer might remove the cryptocurrency from its balance sheet after a nasty Twitter spat with Bitcoiners.

Before sharing the tweet, Anderson had some casual interactions with prominent community members on Twitter. However, the 50-year-old California native is not active on social media.

After selling MySpace, Anderson retired before he turned 40 and started traveling around the world.

Expect the Bitcoin price to drop to the $40,000 psychological line, aka the 200-day SMA, if the current bearish market sentiment continues. On the upside, there are several strong resistance barriers.