After reaching a high of $40,000 on January 9, Bitcoin price has been charting a series of lower highs and lower lows. Over the last three weeks, the bears have managed to flip the 20-day SMA from support to resistance.

Before this Wednesday, the Bitcoin price has been trending horizontally above the $32,000 resistance line. Yesterday, the price plummeted from $32,500 to $30,400, losing nearly $2,000 in its overall valuation.

However, the 50-day SMA ($29,700) has stepped up to the plate and prevented a further downfall. According to the IOMAP, there is moderate support at this level. If Bitcoin price does break below this zone, BTC could reach $26,500, which is a very strong level.

When we see the 4-hour Bitcoin price chart, we can see that the candlesticks have been charting a series of lower highs and lower lows. Plus, the MACD also shows increasing bearish momentum.

The indicators in this timeframe tell us that the Bitcoin price is primed for a further breakdown.

Grayscale Investments has recently acquired cryptocurrency assets worth over $2 billion in just three days, bringing the overall assets under management (AUM) to $26.6 billion. 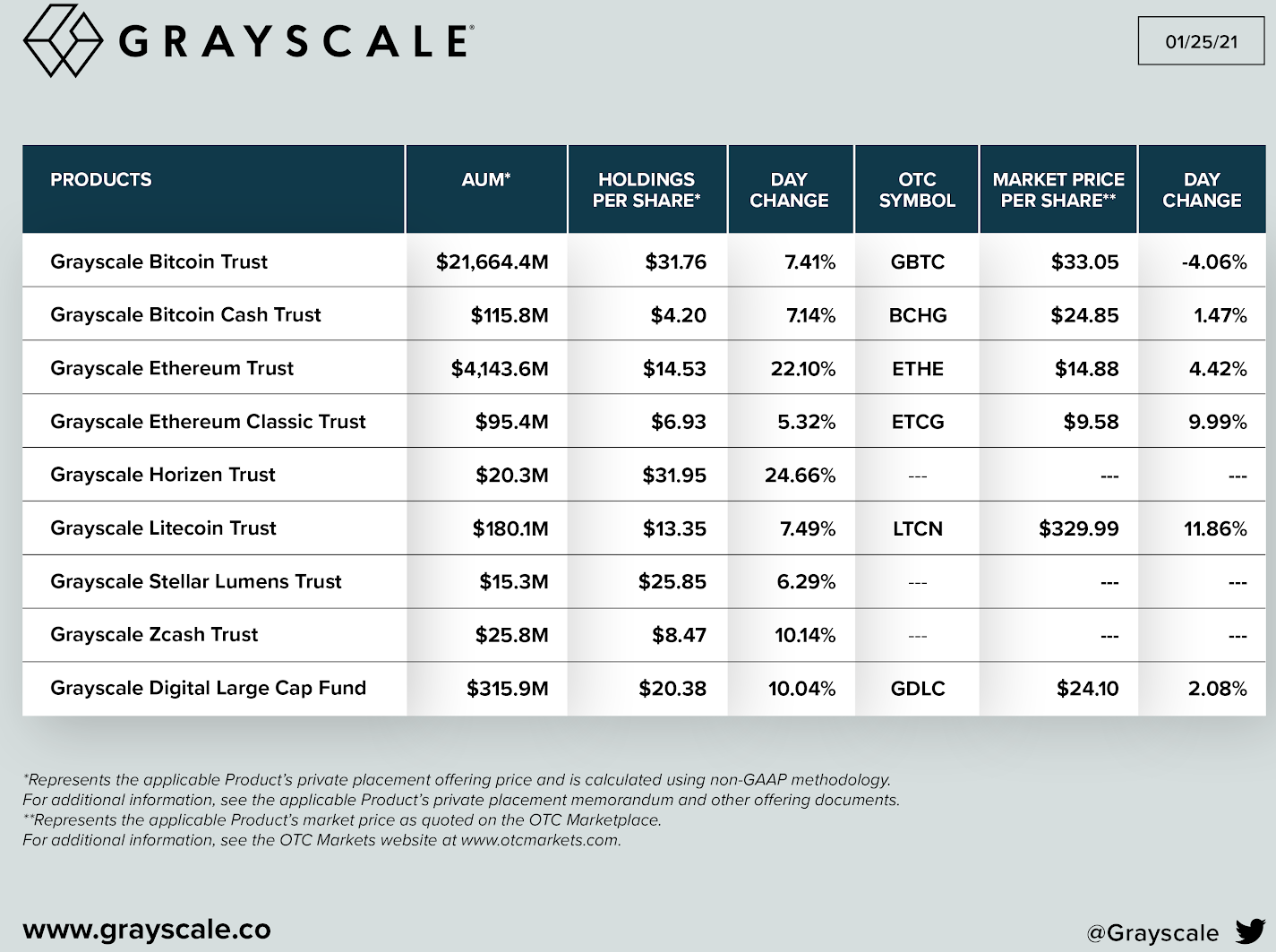 The amount of Bitcoin held by the largest crypto hedge fund has now surged to $21.7 billion. This is the largest share of crypto held by Grayscale Investments when compared to other digital assets.

According to Skew, the Grayscale Bitcoin Trust Fund (GBTC) premium dropped to one percent as Bitcoin slumped from the $34,600 zone to the $31,685 level recently. Grayscale premium is the difference between the market price of an asset and NAV (the net asset value).

In other related news, Grayscale CEO Michael Sonnenshein recently noted that the company had donated a whopping amount of $1,000,000 to CoinCenter, a significant crypto advocacy non-profit organization.

Several large US endowments from universities such as Harvard, Yale, Brown University, and the University of Michigan appear to be buying cryptocurrencies on exchanges. University endowments generally comprise money or other financial assets such as crypto that are donated to academic institutions.

University endowments have a specific legal structure intended to perpetuate a pool of investments for a specific purpose, and crypto assets have been the best performing so far this year.

With over $40 billion in assets, Harvard’s is the largest university endowment, followed by Yale, which has over $30 billion. Michigan has about $12.5 billion, and Brown holds $4.7 billion. It is unknown how much of this is in digital assets.

Bloomberg mentioned institutional investment as one of the main influencing factors on Bitcoin prices in recent months. MicroStrategy, for instance, recently purchased Bitcoin worth more than $10 million.

Bitcoin mining firm Marathon Patent Group is all set to invest a large portion of its treasury reserve in BTC. According to a recent official press release, the company purchased BTC worth $150 million at a little over $31,000 a piece. Marathon’s chairman & CEO Merrick Okamoto said:

By purchasing $150 million worth of Bitcoin, we have accelerated the process of building Marathon into what we believe to be the de facto investment choice for individuals and institutions who are seeking exposure to this new asset class.

We also believe that holding part of our treasury reserves in Bitcoin will be a better long-term strategy than holding US dollars, similar to other forward-thinking companies like MicroStrategy.

At the moment, MicroStrategy owns 70,784 BTC (worth more than $2.25 billion), according to CoinMarketCap. Square has acquired 4,709 BTC worth about $148 million. Okamoto noted that Marathon would be purchasing 103,060 miners expected to be fully deployed in the first quarter of 2022.

If all miners were operational today, based on the Bitcoin network’s current difficulty rate, we would produce approximately 55-60 bitcoins per day. However, by leveraging our cash on hand to invest in Bitcoin now, we have transformed our potential to be a pure-play investment into a reality.

If the bears gain enough momentum to take the Bitcoin price below the 50-day SMA, it may drop to the $26,500 support. This level seems robust enough to absorb a tremendous amount of selling pressure. A further break beyond this level will be tragic since it will take BTC to the 200-day SMA ($17,000).