Over the last two days, the Bitcoin price has overcome two crucial levels – $35,000 and $36,500. Due to this surge, BTC was able to flip the MACD from bearish to bullish. As things stand, the bulls will want to take down to the $38,500 resistance barrier. However, it's not all sunshine and rainbows. The 200-day SMA has crossed the 20-day SMA to form a bearish cross, which could have a negative effect on the price.

Looking at the IOMAP, the Bitcoin price faces strong resistance at $38,500. Previously, at this level, around 650,000 addresses had purchased almost 455,000 BTC tokens.

The following observations are taken from Glassnode’s report: 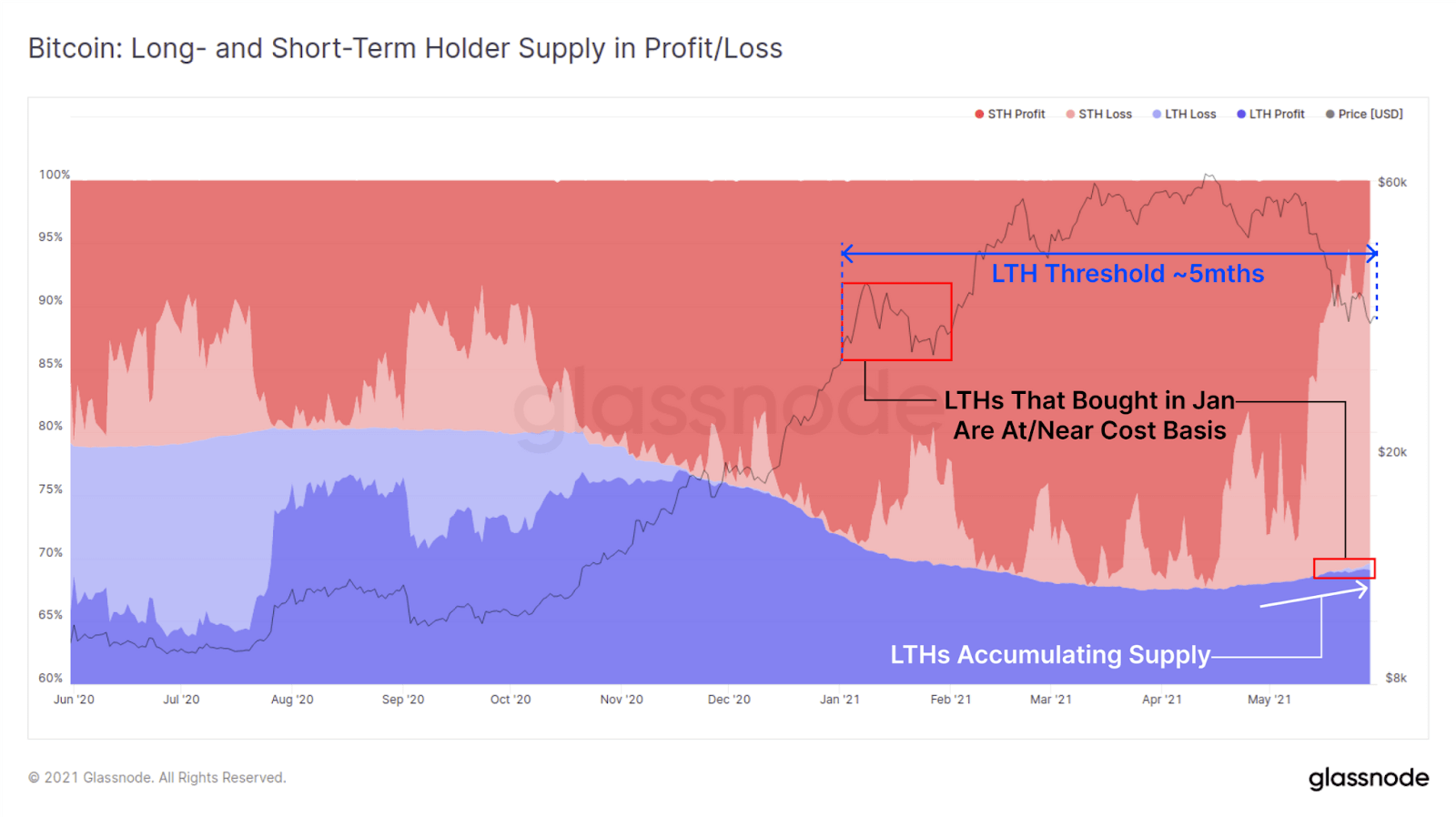 “Long-term holders (LTHs) in profit (dark blue) hold 69% of all BTC supply. This essentially represents all buyers before 2021. STHs in profit (dark red) hold only 4.5% of BTC supply, having fallen dramatically from over 30% in mid-April at the $64k ATH. This suggests that around 26% of the coin supply is currently underwater.” 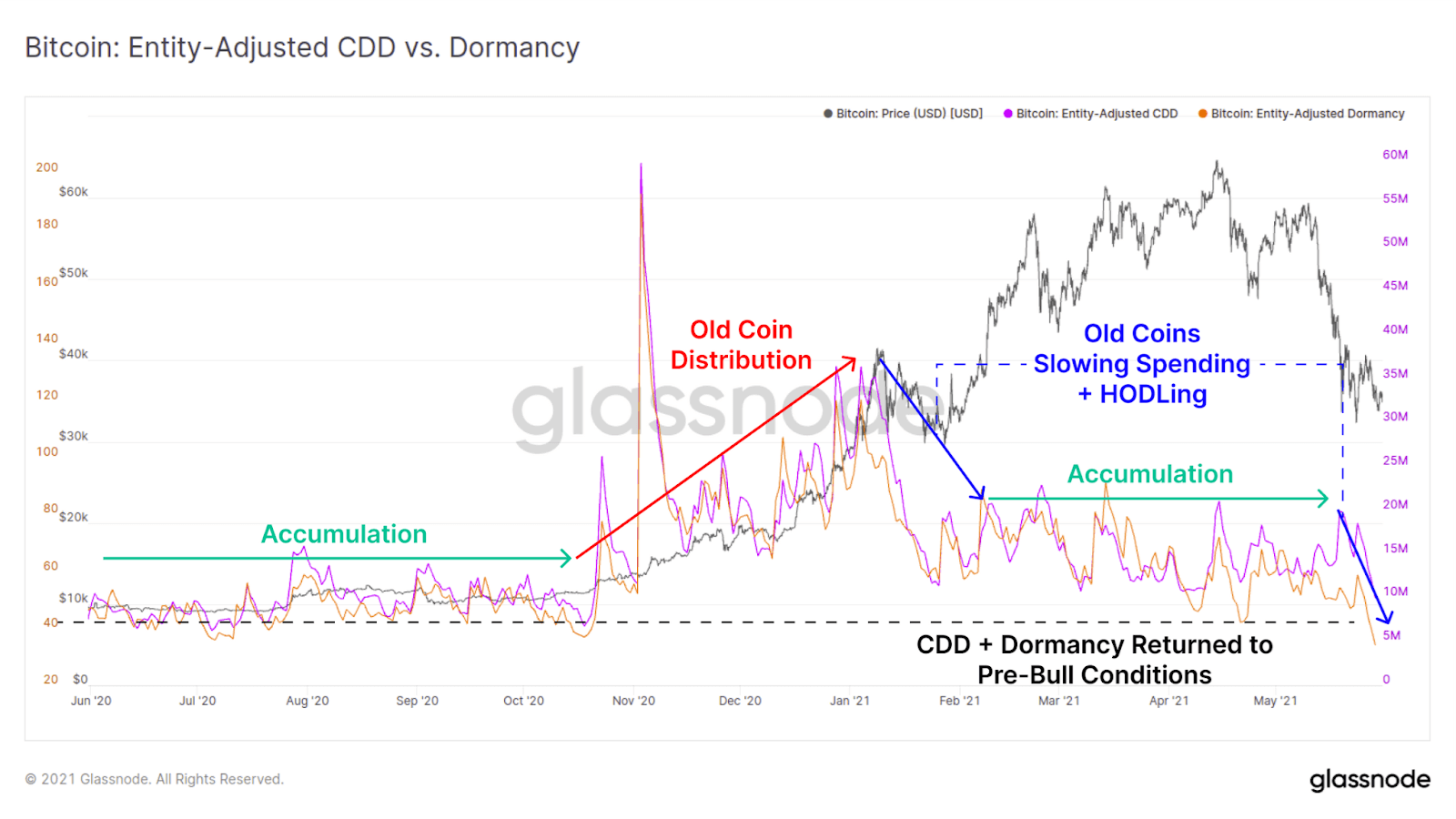 “As seen in ASOL, the total amount of lifespan that is being spent has actually fallen at or below 2020 pre-bull market levels. This confirms that old coins are holding onto their stack, and the majority of spending is by holders of relatively young coins.” 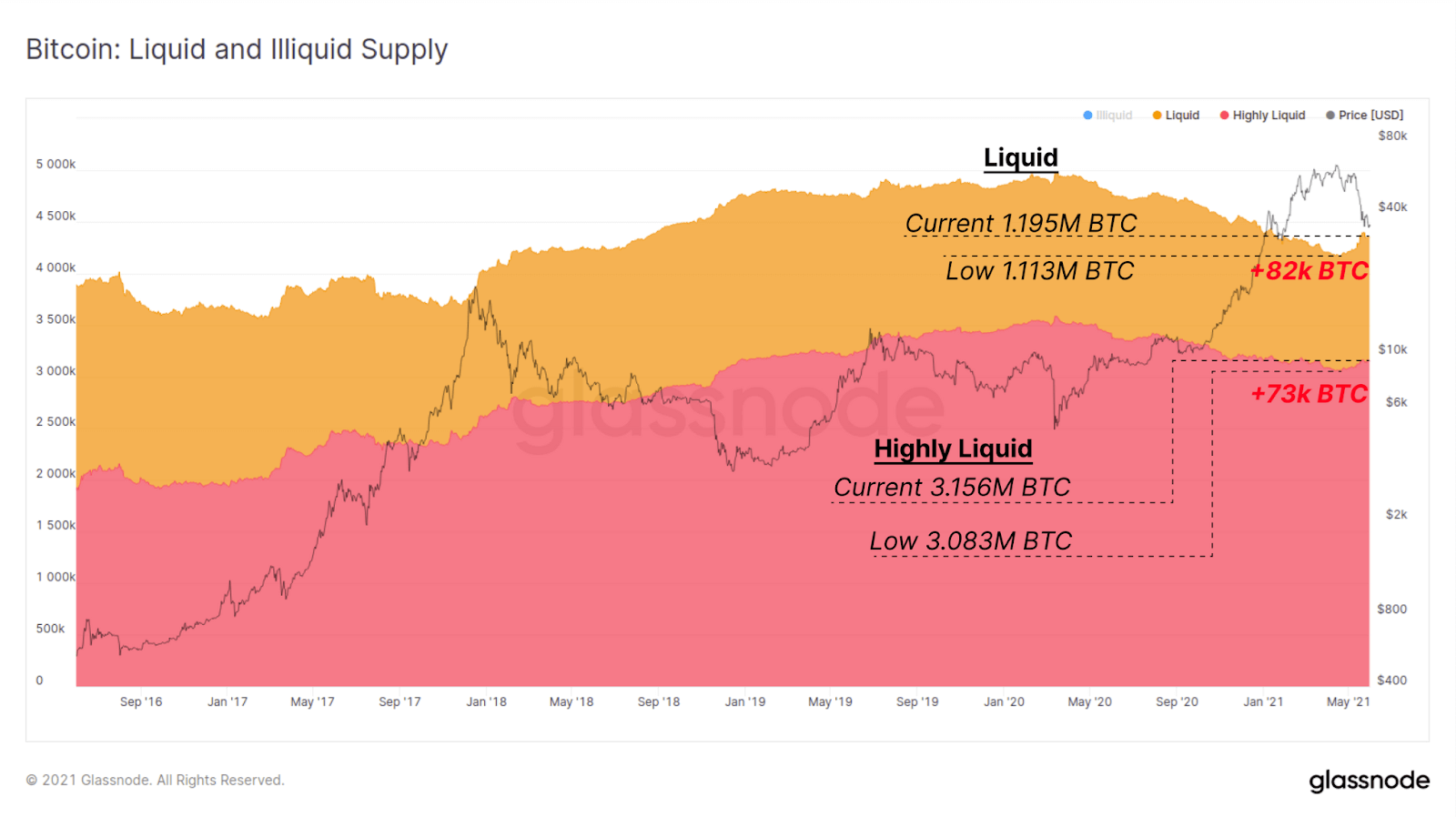 “The Liquid and Illiquid Supply metric shows that throughout May, a total of 155k BTC have transitioned from an Illiquid state (HODLed) to Liquid or Highly Liquid state providing an estimate of the total 'sell pressure'. This will account for both LTHs and STHs who spent coins previously held by to wallets with heuristics similar to cold storage.”

Coins On the Move 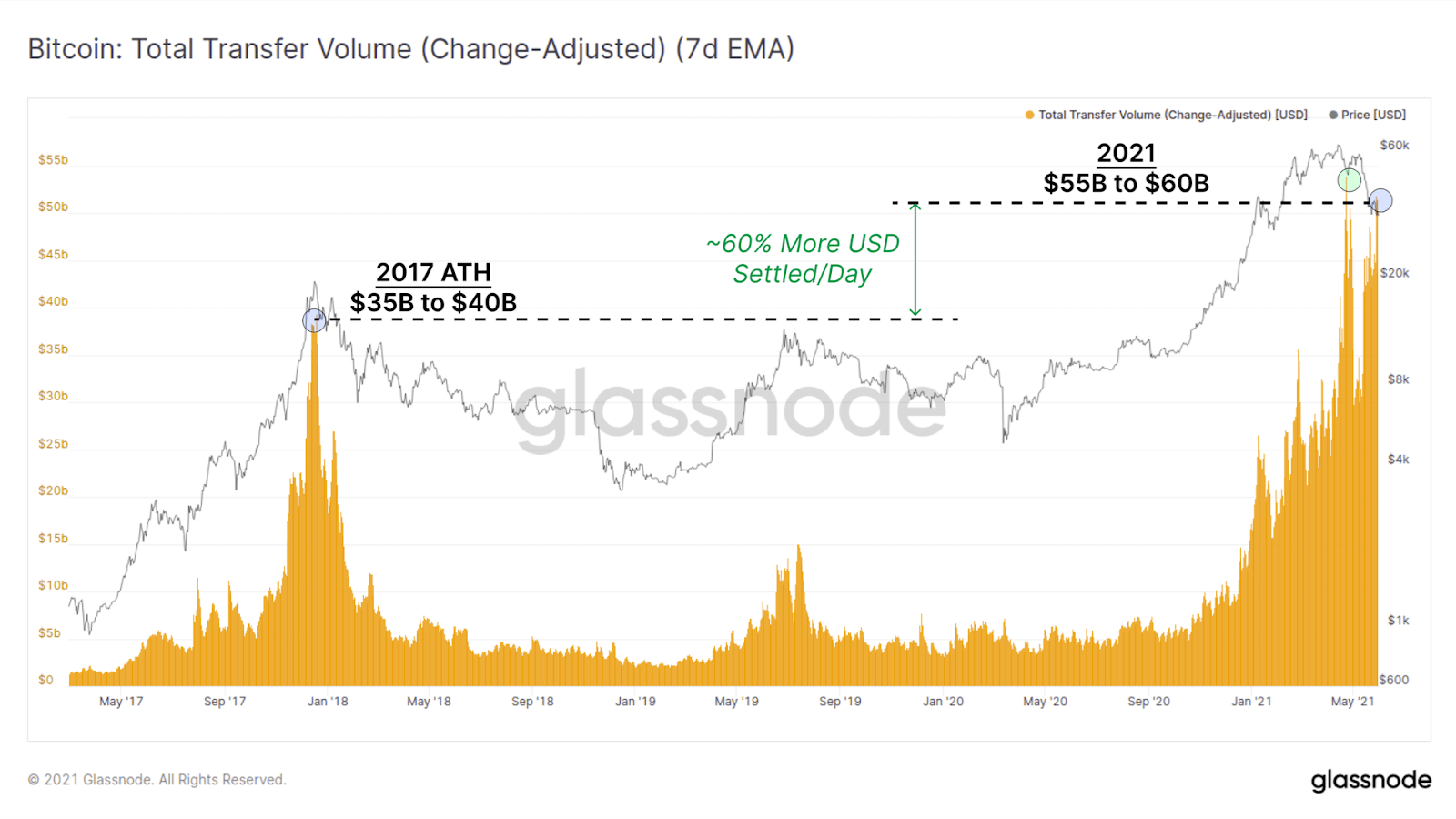 “On-chain settlement in USD terms is also very close to ATH this week with over $55 Billion settled per day. This is 60% more volume than the 2017 peak. It is thus undeniable that a huge volume of coins are on the move.”

Cathie Wood: Central Banks Could Add Bitcoin and Crypto to Their Balance Sheets

Cathie Wood, the founder of ARK Invest, said that central banks could start accumulating Bitcoin and other crypto assets in the future. In a recent episode of The Breakdown podcast, Wood noted that her firm believes that deflation, not inflation, will hit global markets as consumer demand shifts from commodities to services.

We are thinking the much higher probability is deflation. I know most people think that’s crazy given what’s going on, but we have seen a crack in some commodity prices already, lumber an important one. What we think has happened here is consumers have spent the last year spending their money on the only things they could and those are goods, durables and non-durable goods.

With commodity prices falling as businesses try to eliminate excess supply, Wood predicted that emerging markets would take a massive hit. She added that the effects of deflation would cascade into the fiat currencies of emerging markets, which will drive their central banks to seek refuge in Bitcoin and other cryptocurrencies.

Wood noted that inflation and deflation hit different parts of the world differently. According to her, if central banks knew that their currency is going down and that "they would be under attack for as reserves go down," then maybe they would have a balance sheet with Bitcoin and other crypto-assets.

If the buyers could push Bitcoin price above the $38,500 resistance barrier, it should reach the $40,000 psychological level. However, failure to do so could take BTC down to $36,500.