Bitcoin Technical Analysis: BTC Goes Past $50,000 Over The Weekend

After coming close to going past $50,000 on several occasions recently, the Bitcoin price finally broke through that level on Friday. BTC had previously come close to pushing past the $50,000 mark in the last week of August. However, the price retreated after sellers pushed it down to $48,837. The price recovered but could, rising by 1.9% in the next session, but once again, it was pushed back down a further 3.59% to settle at $47,977. With the 20-day SMA coming into play and acting as support, BTC’s price rose once more, rising by over 3% to settle shy of $50,000. However, after a couple of sluggish sessions, we saw BTC fall again and slipping below the 20-day SMA to close the session at $47,500. 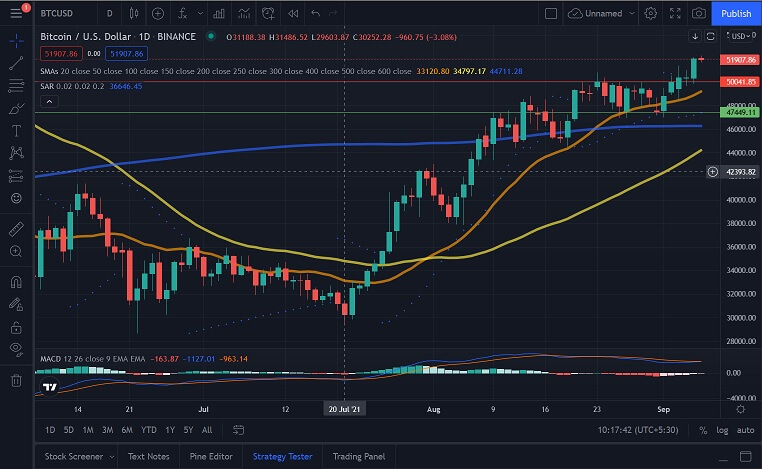 The 1-day Bitcoin price chart shows us that BTC has had a bearish start to the week after pushing up to $52,018 over the weekend. The current session has opened in the red, although buyers and sellers are still trying to control the session. The MACD is currently bearish, while the Parabolic SAR is bullish. If the buyers take control of the session, we could see the MACD flip back to bullish.

IntoTheBlock’s IOMAP for Bitcoin shows us strong support building at $49,300, which is a good indicator that the price may rise further. At this level, over 1.6 Million addresses sold over 780,000 BTC.

The 4-hour Bitcoin price chart shows us that the 20-bar SMA is acting as support, and BTC has almost pushed up to $52,000. BTC has already risen by almost 4% over the previous session, allowing the buyers to flip the MACD to bullish at the start of today’s session, which saw BTC push up to over $52,000. Currently, BTC is at $51,848, and with the 20-bar SMA acting as support and the bullish Parabolic SAR, we could see BTC push back above $52,000. 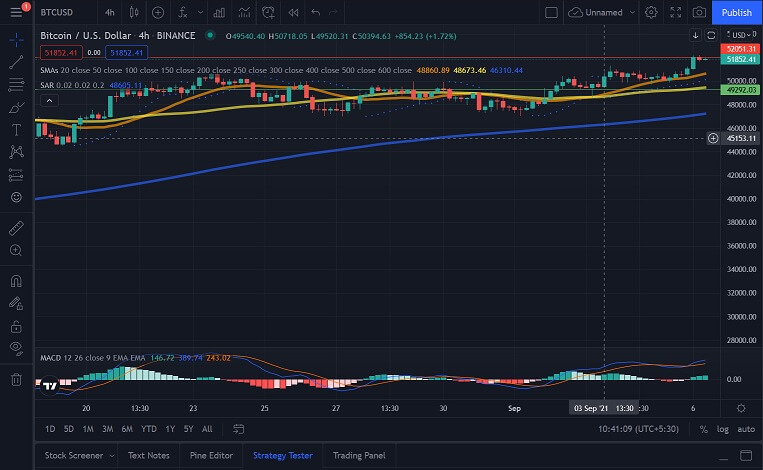 In a recent Bloomberg interview, Chainalysis CEO Michael Gronager asserted that Bitcoin and the cryptocurrency market, in general, are still in a bull run state. He predicted BTC's price to hit $100,000 before the end of 2021. Earlier in August, Kraken CEO Jesse Powell noted that the market was still in the early bull cycle. Speaking on Bitcoin’s price prediction at the time, Powell said:

Meanwhile, the Chainalysis CEO seemed to agree with Powell’s BTC price prediction when asked if he believed BTC could skyrocket to over $100,000 in 2021. According to Gronager:

“I think we are still in the bull market. I think we can see above a $100k by the end of the year, so I would be bullish on that as well. Long term, I would probably usually say the Moon is the limit but we can go beyond that as well.”

The Chainalysis head has joined the list of people who have predicted Bitcoin’s price going above $100,000. Others such as Kevin Wadsworth of Northstar & Badcharts, Blockstream CEO Adam Back, Florian Grummes have made similar predictions.

Even well-known bitcoin critic and economist Peter Schiff also stated that the BTC price could reach $100,000 or $1 million. Gronager also commented on the price of ether (ETH), stating that some factors were driving up the value of the second-largest crypto. According to the Chainalysis chief, one of such factors was the continuous growth of DeFi, which has contributed to ETH’s upward price movement.

Looking at the 1-day price chart, we can see that the current session has seen Bitcoin slip below $52,000. However, if buyers can regain control of the market, we could see BTC push back up, or we could see it fall back to around $50,000 if sellers manage to take control.

Bitcoin
BTC
Top Brokers in
All Regulated Brokers
67% of retail clients lose money when trading CFDs with this provider.