Looking at the daily Bitcoin price chart, the one thing that is preventing BTC from entering the $50,000 level is the 20-day SMA. As things stand, the price is hugging along the curve, and its unsure if the buyers have what it takes to break past this level. 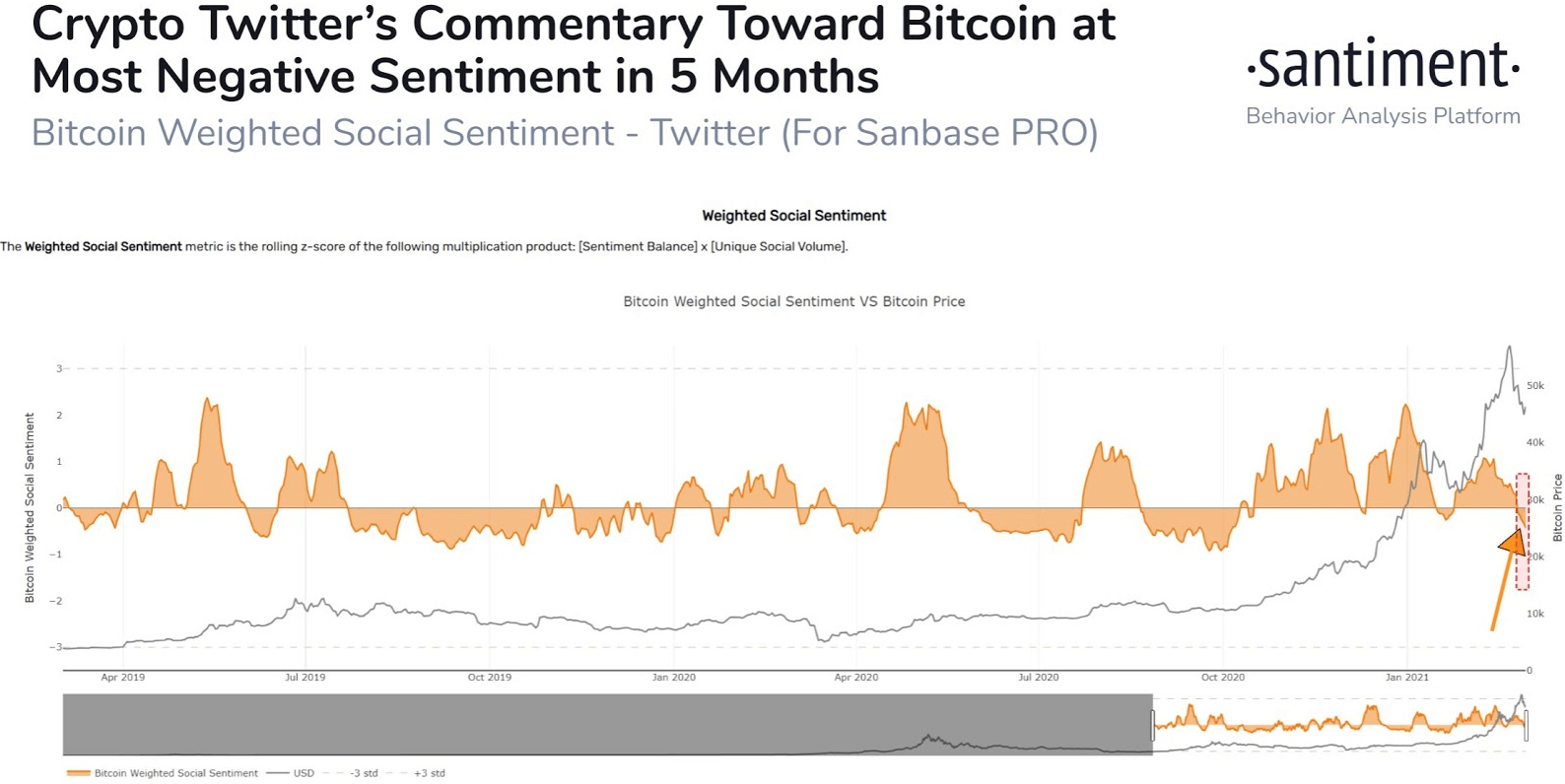 As per Santiment, the overall market sentiment seems to be negative.

“Buying into crowd fear can lead to rewards. And albeit only mildly fearful, #Twitter's #Bitcoin commentary is at the most negative ratio in about 5 months, according to our algorithm. After last week's retrace, the bearish narrative has returned.”

However, it’s not all doom and gloom. 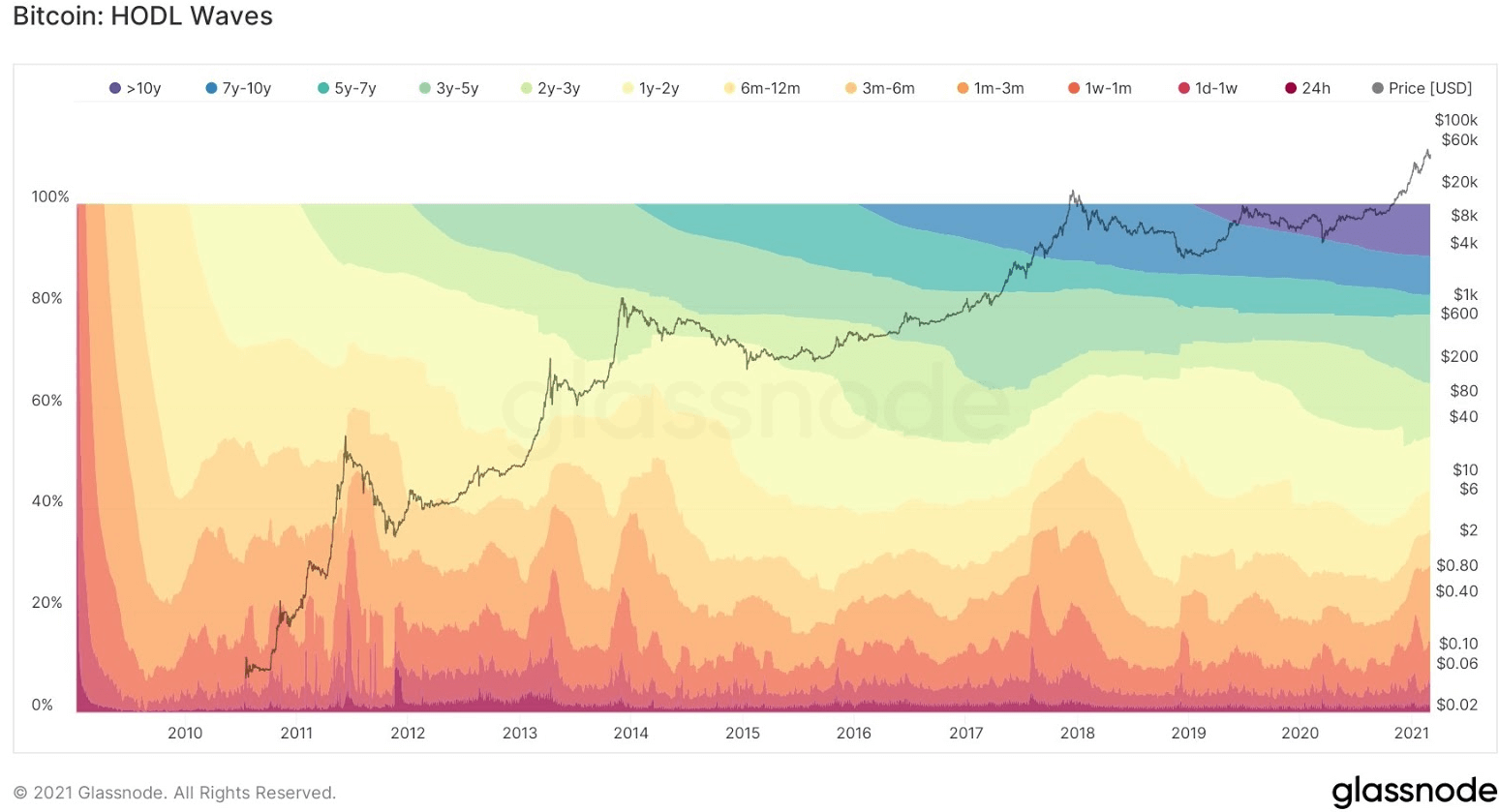 Glassnode’s HODL waves metric shows that  3.3M Bitcoin or 17.87% of circulating supply hasn’t been moved for over 7 years. This shows that the holders would rather hold on to their tokens, instead of selling them off.

MicroStrategy recently announced that it has purchased an additional $15 million worth of Bitcoin. It now holds over 90,000 BTC and has become one of the largest hodlers in the market. Anthony Pompliano tweeted:

“BREAKING: MicroStrategy has purchased an additional 328 bitcoin for $15.0 million. Michael Saylor understands that bitcoin is a game of accumulation. He also just bought the dip :)”

MicroStrategy is responsible for a spike in corporate interest in Bitcoin as a hedge against the US dollar amid rising inflation. In a recent SEC filing, the Virginia-based firm stated:

On March 1, 2021, MicroStrategy Incorporated announced that it had purchased approximately 328 bitcoins for $15.0 million in cash, at an average price of approximately $45,710 per bitcoin, inclusive of fees and expenses.

The company now holds 90,859 BTC which it acquired at an aggregate purchase price of $2.186 billion. This puts the average price of each BTC they own at $24,063. Microstrategy’s total BTC stash is now worth around $4.39 billion. This translates to over $2.2 billion in profits for the firm.

The company’s shares have benefitted from this accumulation. After announcing the new BTC purchase, its shares gained 4.56%  Micheal Saylor, the CEO of MicroStrategy believes that BTC will become the saving method of choice for billions of people in the near future.

We’re going to see a day when 7-8 billion people have a bar of digital gold on their phone, and they’re using it to store their life savings with it.

Goldman Sachs has reportedly resumed its cryptocurrency trading desk. According to a CNBC report that cited a source close to the matter, the company will begin dealing Bitcoin futures and non-deliverable forwards for customers shortly.

This news comes amid rising Bitcoin interest by institutions, which has surged by more than 470% over the past year. Investors and enterprises are increasingly seeing Bitcoin as a hedge against inflation as governments turn on the stimulus taps.

The trading desk is part of Goldman’s initiatives within the fast-growing digital assets sector. A few other activities include projects involving blockchain technology and central bank digital currencies. The banking giant is also exploring the potential for a Bitcoin exchange-traded fund and has requested information to explore digital asset custody, the source added.

Goldman first set up a cryptocurrency desk in 2018, just as Bitcoin’s price was falling from record highs. Since then, market infrastructure for BTC and other major cryptocurrencies has significantly matured.

Bitcoin price will continue to struggle to go above the $50,000 mark as of now.