Bitcoin Technical Analysis: BTC is Going To Jump Above $57,500

After trending horizontally below $58,000 resistance for the last eight days, the bears finally took over this Wednesday and closed a candlestick below the 2-month upward trending line. However, the buyers managed to take back control and push Bitcoin price back above $57,500.

As things stand, the Bitcoin price needs to take over the $59,000 resistance level to reclaim the >2-month upward trending line. This could be a distinct possibility when you look at the daily chart:

Looking at the IOMAP, we can see a solid resistance wall at $59,000. Previously, at this level, 1 million addresses had purchased 394,000 BTC tokens.

PayPal co-founder and venture capitalist Peter Thiel recently discussed whether China is planning to win a financial arms race with the US through Bitcoin. He shared his views in a virtual Nixon Seminar. 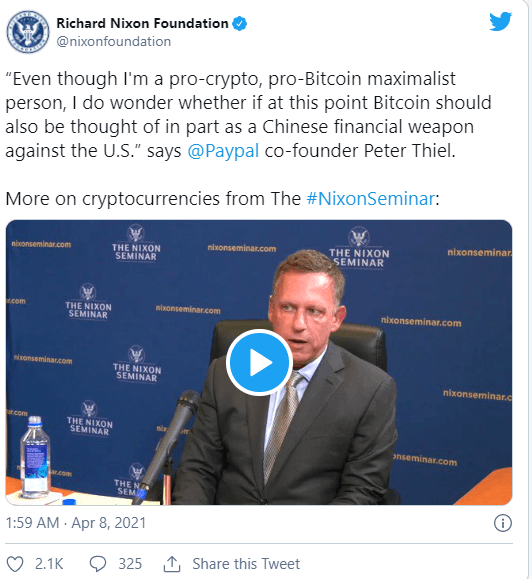 “Even though I'm a pro-crypto, pro-Bitcoin maximalist person, I do wonder whether if at this point Bitcoin should also be thought of in part as a Chinese financial weapon against the U.S.” says @Paypal co-founder Peter Thiel.

Seminar moderator Hugh Hewitt wanted to know if the digital yuan is a "threat to the dollar and its dominance of world markets." To this, Thiel responded that it is not. He dismissed the CBDC as "some sort of a totalitarian measuring device."

Thiel said that the real concern is Bitcoin because it is more likely to serve as a functional reserve currency. The less dominant the USD is, the less affected it is by the US monetary and foreign policy, he added.

If China’s long Bitcoin, then perhaps from a geopolitical perspective the U.S. should be asking some tougher questions about exactly how that works.

The seminar also included former Secretary of State Mike Pompeo and former National Security Advisor Robert O'Brien. Pompeo agreed that a digital yuan "has a huge impact for [China's] surveillance capacity." He appeared to assert that such a coin would also allow it to make cross-border transactions that could skirt US sanctions.

The bulls need to push Bitcoin price above the $59,000 resistance barrier and reach the $60,000 mark once again.