Bitcoin Technical Analysis: BTC Is Hovering Above The $50,000 Psychological Level

Bitcoin Price Is Sitting On Top Of 20-day SMA

As things stand, the Bitcoin price is sitting on top of the 20-day SMA. However, do note that the parabolic SAR has reversed from positive to negative. The relative strength index (RSI) is hovering horizontally which shows that the buyers and sellers are cutting each other off.

Bitcoin price is sitting on top of several support levels. The nearest one is at $50,000, wherein 1.15 million addresses had purchased 530,000 BTC tokens.. These  levels are robust enough to absorb a lot of selling pressure.

Santiment posted the above chart and tweeted about the Twitter sentiment:

“In spite of #Bitcoin hovering from $46.5k to $52.5k this past week, the sentiment from #Twitter is at its most bearish level since October 1, 2020 today. As we've noted in previous studies, moments of crowd disbelief are commonly the most opportune times to buy with confidence.”

Bitcoin Price Is Some Way Off From Being “Overbought”

A recent study by Kraken dubbed “Staying Ahead of the Curve” has suggested that Bitcoin might considerably gain in value before hitting the overbought territory. The study noted that the gains might come before the ongoing rally ends.

The report’s conclusions are based on Bitcoin’s historical data, which shows that the flagship crypto might rapidly be approaching a resistance level. However, it remains several tens of thousands of dollars away from the overbought zone.

Kraken added that if BTC surpasses the $75,000 mark in the next few months, historical price action shows that the asset would near the top of the cycle. The Kraken report further highlighted that Bitcoin is currently trading in a similar manner to the first quarter of 2013. If the trading trend sustains, the first quarter of this year will be a historic quarter with a relatively outsized return.

By analyzing BTC’s dating back to Jan. 2011, we can plot a logarithmic growth curve that connects prior market cycle tops (resistance) and bottoms (support). Though BTC does not have to adhere to either curve indefinitely, both can help us better understand when BTC may potentially be in either a bull or bear market.

Historical data shows when the market value of Bitcoin gets significantly higher than its realized value, a market red zone might be around the corner. Bitcoin has been on a major bull run initiated in December last year. This has caused several investors to raise concerns that BTC is in a bubble that will burst any time.

India Not Banning Crypto For Now

In a recent interview with CNBC, Indian Finance Minister Nirmala Sitharaman said that reports of a cryptocurrency ban are overstated. While negotiations are still ongoing, she said that she expects the end result to be more tempered.

Yes, a lot of negotiations, discussions are happening with Reserve Bank. Obviously the Reserve Bank will be taking a quorum on how, what kind of unofficial currency, cryptocurrency will have to be planned, and how it has to be regulated. But also, we want to make sure that there’s a window available for all kinds of experiments which will have to take place in the crypto world.

She went on to say that regulations won't be as “severe” as have been previously reported. Authorities will “look inward” and take a “very calibrated” stance as opposed to the “mixed messages coming in from across the world.

The world is moving fast with technology. We can’t pretend that we don’t want it. [...] I can only give you this clue: that we are not closing our minds, we are certainly looking at ways in which experimentations can happen in the digital world, in cryptocurrency and so on.

Sitharaman’s comments have brought relief to crypto businesses, users and hodlers in the country. Earlier this month, a Bloomberg report had cited a senior Indian financial minister who had said that India would impose a blanket ban on all cryptocurrencies. The hypothetical ban had attracted widespread criticism from across the crypto community.

Glassnode recently revealed that most of the people who bought Bitcoin in 2021 have not sold them. The SOPR (Spent Output Profit Ratio) metric could offer an explanation for the strong hodl spirit displayed in the middle of a volatile market.

Glassnode calculates the SOPR by dividing the selling price by the paid price. If the SOPR is above 1 then sellers are profiting. In a bear market, liquidations continue and the value falls below 1, where the losses exceed the gains.

In February, the indicator never fell below 1, which is good news for those who believe the rally is not over. 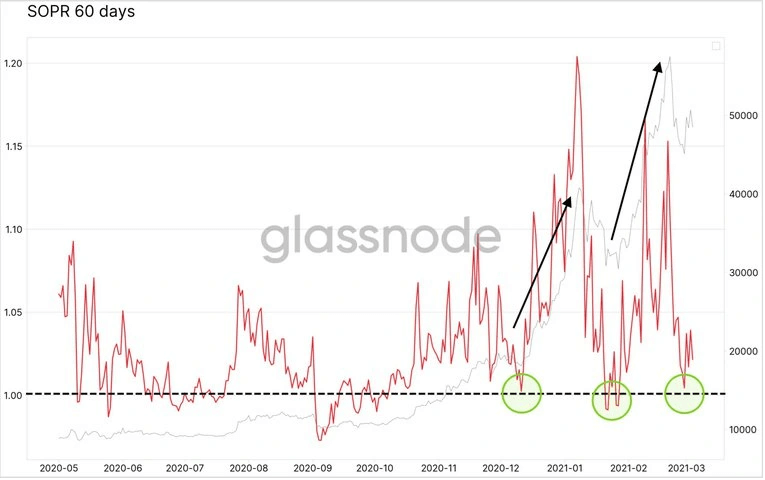 “60-Day SOPR (entity-adjusted) reset without falling below one. This indicates a high HODLing conviction from new investors, as coins that were bought in 2021 did not move at a loss during this last dip.”

This indicator could be a new way to measure the current market sentiment, which is commanded by large institutions and whales with bullish views over a long period of time. These companies have bought Bitcoin as a store of value and a hedge against a possible crisis that could happen as a result of excessive money printing.

For instance, MicroStrategy has recently acquired Bitcoin worth over $4 billion. Similarly, Tesla bought $1.5 billion in Bitcoin and changed its corporate policy to eventually accept Bitcoin. Both Michael Saylor (the CEO of MicroStrategy) and Elon Musk (the CEO of Tesla) have clarified that their strategy is to hodl their tokens and not play on speculation. 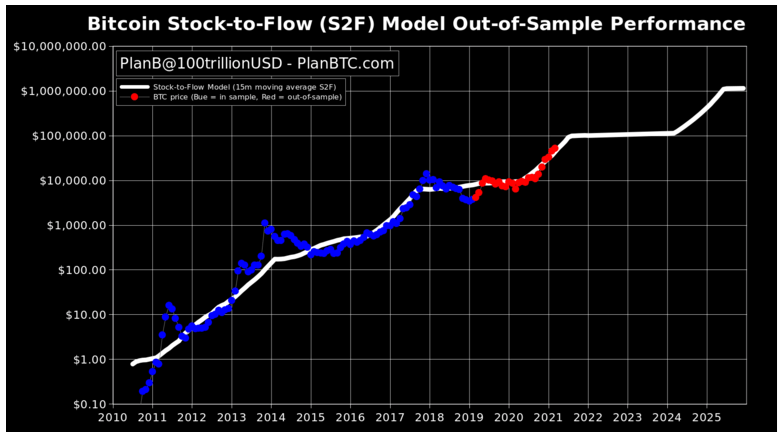 Bitcoin Is Expected To Reach These Levels

Bitcoin price will likely not drop below the $50,000 level.