Bitcoin Technical Analysis: BTC Is Trending Back Above The $30,000 Psychological Level

Between July 12 and July 20, the Bitcoin price crashed from $34,300 to $29,700 – losing almost $4,500 in its overall valuation. During this drop, BTC flipped the 20-day SMA from support to resistance. Along with that, Bitcoin also managed to reverse the parabolic SAR from positive to negative. Let’s take a closer look.

This Wednesday, the Bitcoin price bounced up to $30,675 after finding crucial support at the $29,700 line. Since the MACD indicates sustained bearish market momentum, the overall sentiment is still negative.

The Bitcoin price faces several strong resistance levels upfront, with the nearest one at $31,500. As per the IOMAP, almost 700,000 addresses had previously purchased almost 395,000 BTC at this level.

“While the price of BTC has dropped below $30k, stablecoins held on exchanges continue to sit close to ATHs. There continues to be a lot of liquidity in the markets. Although we cannot tell how much of the USD sitting on exchanges is on the sidelines and waiting to be deployed into BTC this is a good sign medium to long-term. If investors expect BTC to be in a bear market and the stablecoins are not primarily used in e.g. loan products one would expect capital to be withdrawn completely.”

“At the current historical top of $65,000 the MVRV did not reach the same level reached in the previous bull run, but it did reach the band. Weak top. At the current range, $30,000, we have reached the same buy zone level since September 2020. Buying at this same level in the past cycle was seen between January to March 2017. It does not sell at the bottom, but prepares ammunition for the bottom. Short-term data offers probability of test at support, good exposure opportunity.” 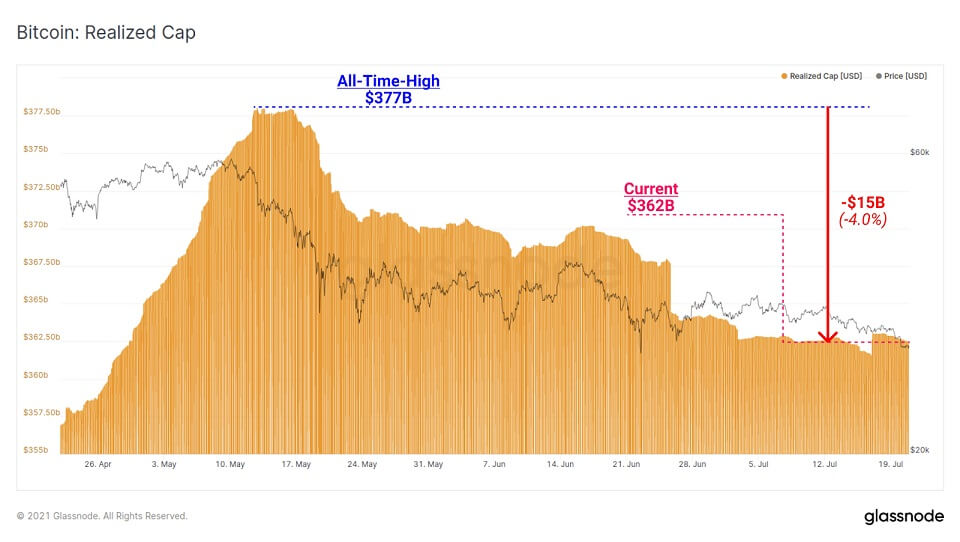 "The #Bitcoin Realised Cap tracks the aggregate value of all coins at the price when last moved. It rises when coins are spent at a net profit, and declines when spent at a loss. Since mid-May, the market has absorbed over $15B in net losses." 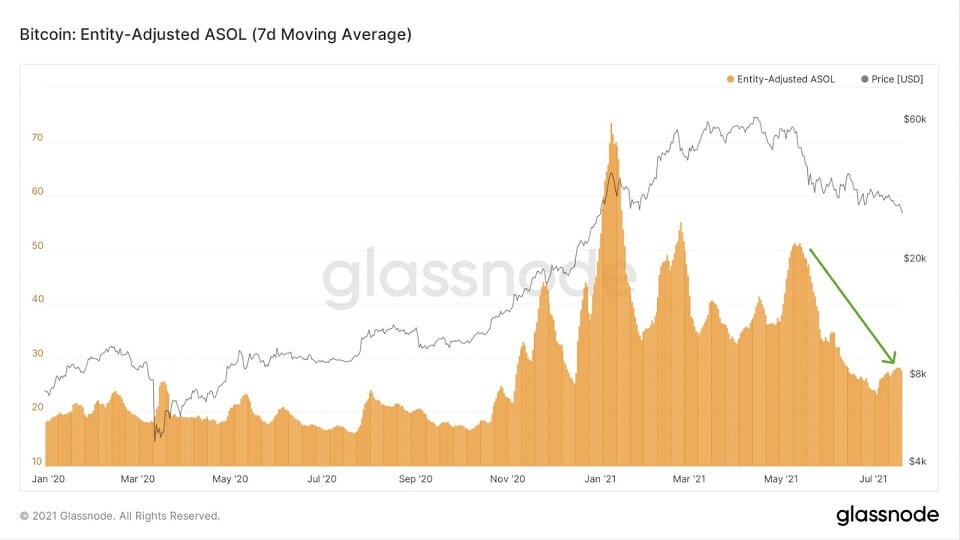 “ASOL continues it's downtrend as old hands are not profit taking much anymore. #Bitcoin”

"The B Word," a Bitcoin-centered conference has been confirmed for this week. Notably, Tesla CEO Elon Musk would be attending the event. Musk will participate in a live discussion with Square and Twitter CEO Jack Dorsey and Ark Invest founder and CEO Cathie Wood during the conference, which will commence today at noon.

Other presenters at the conference include Steve Lee and Conor Okus from Square Crypto, Hong Fang from OKCoin, Phillip Gradwell from Chainalysis, Dr. Neha Narula from the MIT Digital Currency Initiative, Adam Back from Blockstream; and Sam Korus from ARK Invest.

Musk informally agreed to join the conference last month in a Twitter exchange with Dorsey. A recent announcement from the Crypto Council for Innovation is the first sign that the billionaire executive has agreed to speak.

Dorsey and Musk’s respective opinions on Bitcoin are somewhat at odds. While Dorsey has been unapologetic about his enthusiasm for Bitcoin, Musk has expressed concerns about the blockchain’s outsize energy consumption. Tesla announced it would start accepting Bitcoin for purchases in February. But it changed its stance in May. At the time, Musk wrote:

“Cryptocurrency is a good idea on many levels and we believe it has a promising future, but this cannot come at great cost to the environment."

The Bitcoin price needs to break the $31,500 resistance barrier to temporarily reverse the bearish narrative.