As things stand, the market momentum is overwhelmingly bearish, as per the MACD. This shows us that the Bitcoin price is likely going to drop some more. However, the relative strength index (RSI) shows that BTC is already oversold, so a bullish resurgence could be on the cards.

Bitcoin Price FUD Is Going Up 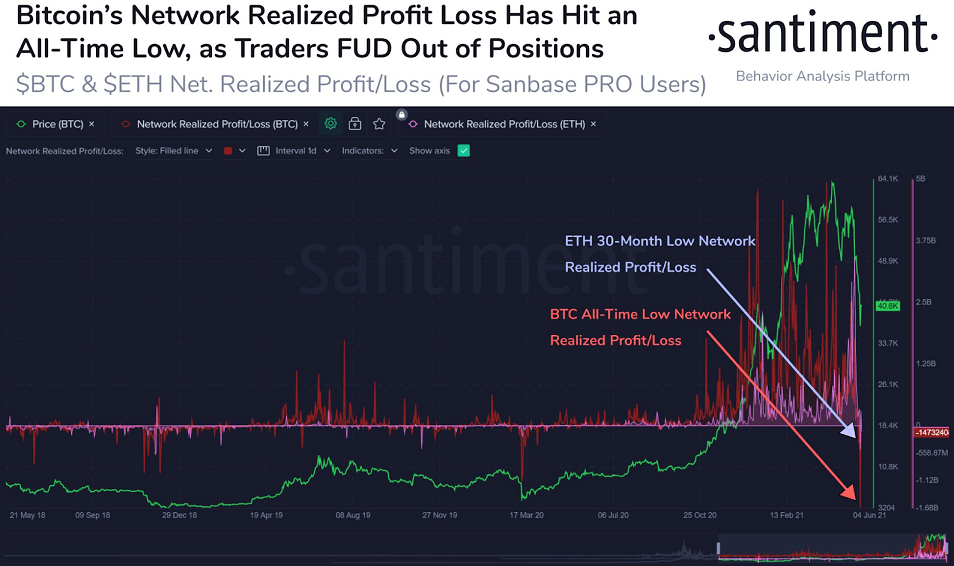 Santiment noted about the realized profit/loss:

“#Bitcoin's price is back to $37k and #Ethereum's back to $2.4k. Our network realized profit/loss metric for each asset has shown record-breaking outputs, as traders #FUD out. Historically, these lows spikes typically lead to at least short-term bounces.”

This inflow spike is further corroborated by CryptoQuant

"Stablecoins have been flowing into exchanges at an increasing pace since the start of this bull-run Ox ...but have really taken off since #Bitcoin started correcting after it's latest all-time high." 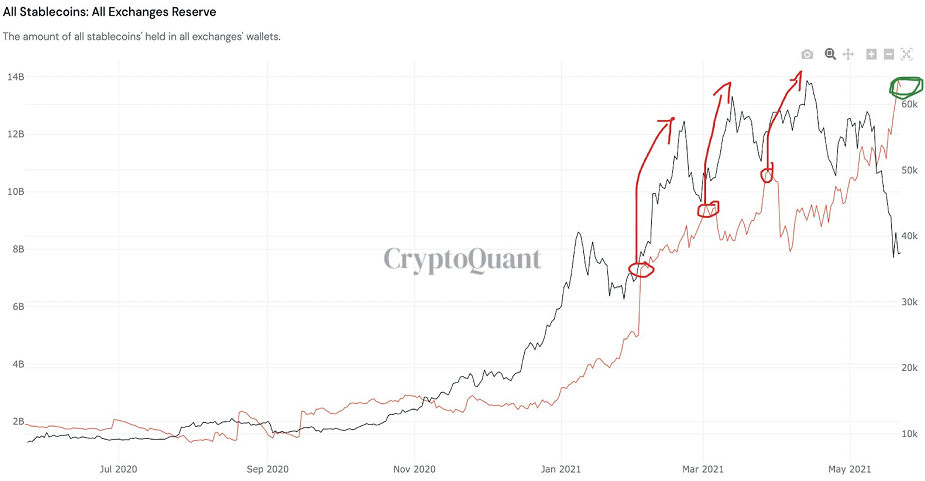 Ran Neuner shared the above chart and made the following observation:

"This is the stable coins on exchanges today. The number of stable coins is at an ALL TIME HIGH which means investors have cash and are ready to buy. Historically , after every spike Bitcoin has risen 30%- 50 % in the next 30 days."

In fact, we can see that Bitcoin price’s socal and trading volume has reached all-time high. 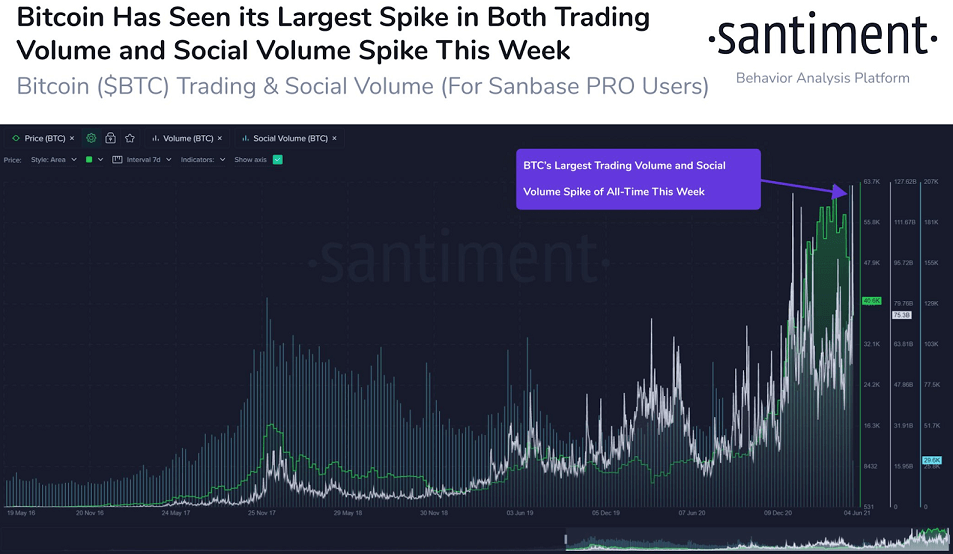 "In #Bitcoin's 12+ year history, there has never been a larger spike in both raw trading volume ($126.4b) and social volume (204.6k tracked mentions) in a single week, according to @santimentfeed data. As prices polarize, keep an eye on hype dying down."

What is contributing to this overall selling pressure is the whale activity. 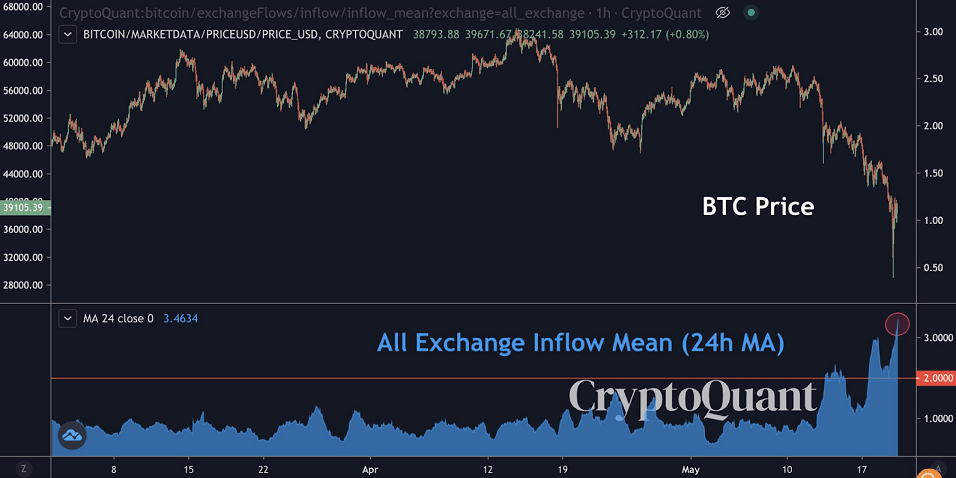 "Still bearish in the short term. This whale dumping indicator hit a year-high since the March great sell-off last year. Whales keep depositing $BTC into exchanges. If this is an orchestrated effort, it will go down again. If not, we may retest the bottom again at least." 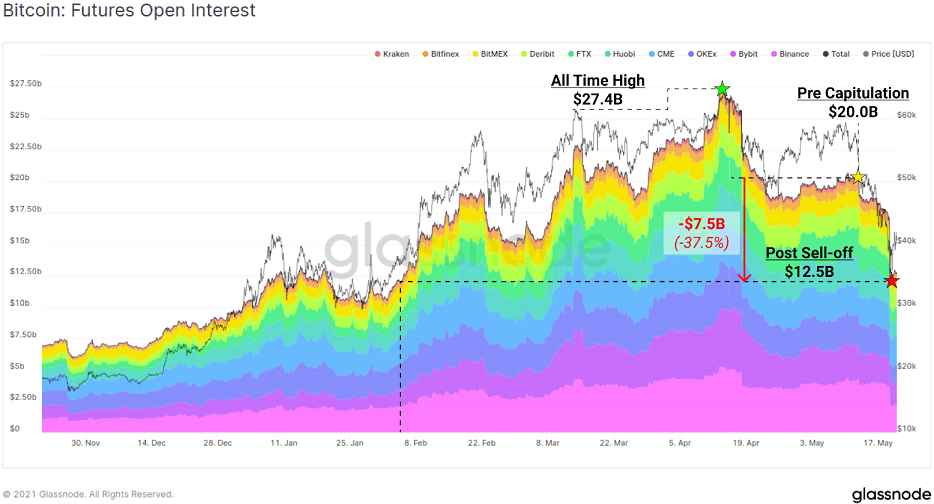 "This weeks correction has resulted in a substantial deleveraging of futures markets. Over $7.5B in #Bitcoin open interest was cleared within a few hours, bringing total open interest back to levels last seen in early February."

However, It’s Not All Bad

Some long-term holders are holding strong. 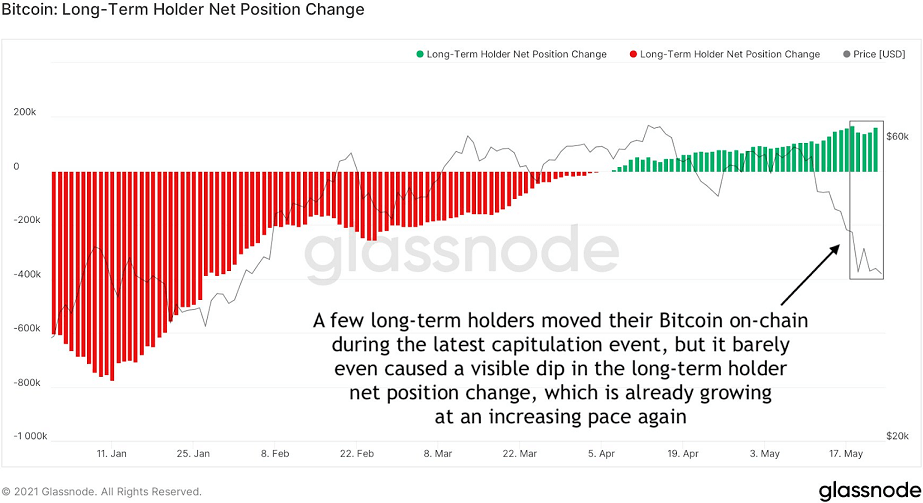 "During this week's capitulation event, most of #Bitcoin's on-chain volume was from short-term holders that were triggered by it There was a small uptick in long-term holders moving their coins as well - but it barely even caused a dent in the uptrend in their net positions" 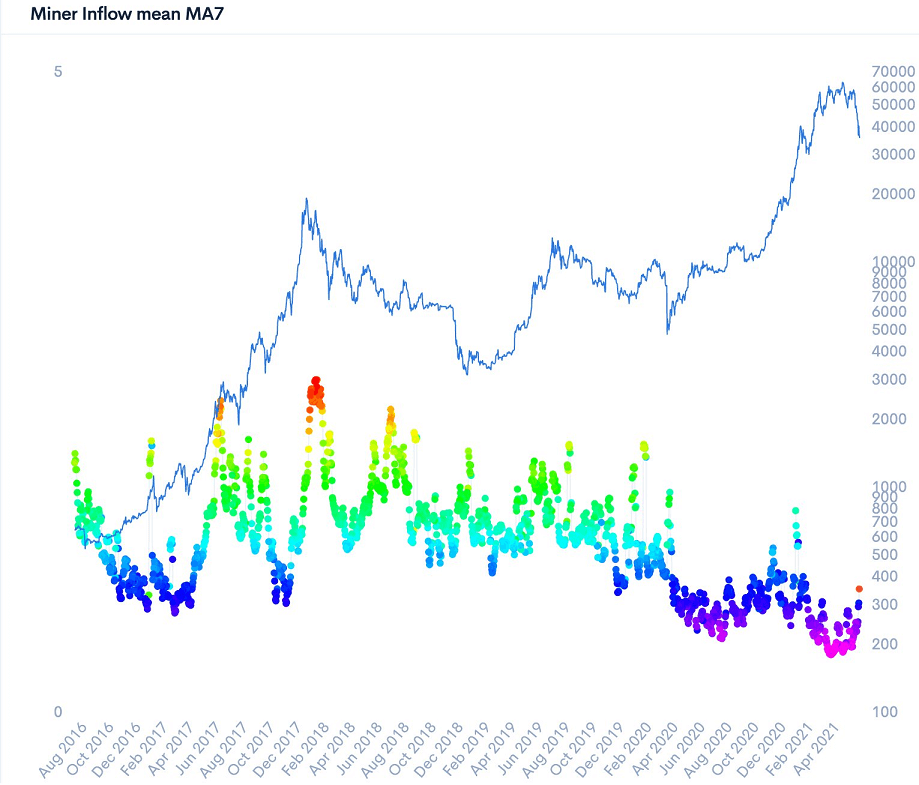 By the looks of it, miners are not selling, but expect the selling to pick up as we move towards the next local top.

The Iranian government has appointed intelligence officers to crack down on illegal crypto miners. This move aims to solve the nation’s concerns with rising electricity consumption. Bloomberg reported that the Ministry of Intelligence helped set up committees across the Asian country to identify and seize computer ”farms” that mine crypto without permission.

Gholamali Rakhshani Mehr, the distribution coordinator at Tavanir, highlighted that Iran is an attractive location for miners because of its subsidized energy prices. However, he noted that the surge in mining generated massive electricity consumption and thus caused energy deficiency across the entire nation.

Interestingly, the reward for reporting illicit crypto mining is 200 million rials ($873), which is 7.5 times the minimum monthly wage in Iran. The media also highlighted some of the government’s recent success so far this year. Officials have seized hundreds of computer devices hidden in houses, industrial units, and abandoned garages.

Various companies inside Iran started mining digital assets due to the low-cost electricity after the government approved the process in 2019. Even though many of the firms profited, the operation caused some environmental controversy.

According to Tehran Times reports, the government plans to charge heavy fines on miners who use this type of energy. Mostafa Rajabi Mashhadi, the Energy Minister’s spokesman, added that mining firms and people would also have to repair the country’s electricity network.

On the other hand, the head of Iran’s Thermal Plant Holding Company (TPPH) provided a more positive outtake:

The necessary equipment has been installed in three power plants of Ramin, Neka, and Shahid Montazeri. According to the laws and regulations announced by the cabinet and the Energy Ministry, we have been allowed to allocate some capacity of our power plants for mining cryptocurrencies.

The country’s officials have agreed to the proposal but revealed that those organizations would not profit from the Iranian subsidies on their fuel supplies.

The Bitcoin price will likely break below the $35,000 support barrier. If that happens, the 2021 yearly open of $28,250 will be tested. A break below that could be very dangerous.