Bitcoin price ventured into the $40,000 psychological level last week. However, over the next four days between January 9 and January 12, the price of Bitcoin has dipped to $34,000, reaching intraday lows of $30,180. However, the bulls have taken back control over the last three days.

The Bitcoin price managed to bounce up from the 20-day SMA and flip two key resistance levels to support – $35,000 and $38,700. The premier cryptocurrency is currently looking to re-enter the $40,000 psychological level.

However, do note that the moving average convergence/divergence (MACD) is presently trending in the red, so Bitcoin price may not be able to explode up.

IntoTheBlock’s IOMAP shows us that there is a lack of strong resistance levels up front. The only resistance barrier of note is at $40,000, wherein 4,000 addresses had previously purchased 39,000 BTC tokens. If the buyers take full control, they should have no problem in breaching the $40,000 barrier.

However, the MACD in this time frame is trending firmly in the green. As such, the price should be able to break past the upper Bollinger band and enter the $40,000 zone.

Bitcoin appears to be recovering from its recent price correction, with the options market pricing witnessing a 20% chance of soaring past $50,000 by the end of January. The flagship crypto surged by nearly $4000 (11%) in 24 hours recently, as per CoinDesk 20 data.

Despite the recovery, BTC is still short of the record high of $41,962 (Jan 8). According to data provided by Skew, options market data shows that investors are betting on a continued rally and are assigning a 20% probability of Bitcoin rising above $50,000 by January 29 (monthly expiry).

Option probabilities are calculated using the Black-Scholes formula based on a few crucial metrics. Some of these metrics include call options’ prices, strike prices, and the underlying asset price. 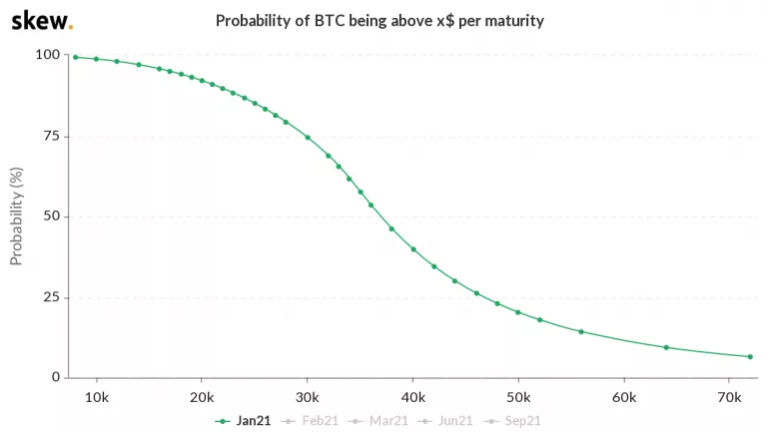 The 20% probability of Bitcoin moving above $50,000 looks impressive, given that the monthly expiry is just two weeks away, and the coin is quite far from $50,000. The likelihood of BTC rising above a certain level on or before the expiry is positively correlated to the time left for expiry.

According to Deribit Insights, a 31% rally to $50,000 in two weeks may be challenging to visualize but is far from impossible. The cryptocurrency has charted more significant moves in recent times. For instance, prices rose 52% from $19,000 to $29,000 in the last two weeks of December alone.

After investing over $1 billion in Bitcoin, MicroStrategy, a business intelligence company, is hosting an online conference to educate large enterprises about the potential benefits of investing in Bitcoin. The conference, dubbed “Bitcoin for Corporations,” has received support from other industry giants such as Gemini, Binance, Coinbase, Fidelity, Grayscale, and more.

Michael Saylor, the CEO of MicroStrategy, took to Twitter to announce the initiative. He called it a “free, online, accelerated course in Bitcoin strategy and tactics to grow your company and create shareholder value.” 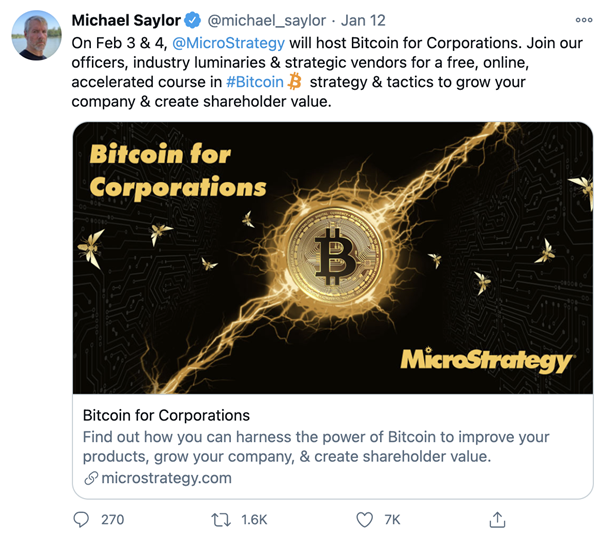 The first block is scheduled to take place on February 3. It will outline how Bitcoin could serve as a treasury reserve asset and the macroeconomic factors that are behind its corporate and institutional adoption. Saylor and Stoneridge CEO, Ross Stevens, will lead this part of the conference.

Later, MicroStrategy’s President and CFO Phong Le will provide an overview of different ways in which corporations can integrate Bitcoin into their treasury reserve strategies. A few other topics that will be covered in the conference include legal and regulatory considerations, accounting, taxation and audit.

A handful of crypto-related companies will release their presentations on the second day – February 4th. Some of the names include Fidelity Digital Asset Services, Galaxy Digital, Coinbase, Binance, Kraken, Grayscale, Gemini and Genesis.

Bitcoin Price is Expected To Hit What Level?

The Bitcoin price outlook is overall bullish, so we can expect the weekend rally to push the price above $40,000. It will be interesting to see just how far the price will reach in this rally.