Bitcoin jumped from $32,000 to $37,250 over the last three days, easily overcoming the $35,000 psychological level. As of now, it looks like the premier cryptocurrency is on the fast track towards the $40,000 zone. The overall crypto market cap has crossed the $1 trillion benchmark. It seems like BTC is riding this massive wave of positive momentum as it makes its way towards new highs.

Bitcoin’s four-hour chart had flashed the sell signal with a green-nine candlestick. However, after dipping a bit from $35,000 to $34600, the price managed to recover above $37,000.

The downside is protected by three healthy support levels, as seen in IntoTheBlock’s “In/Out of the Money Around Price” (IOMAP). These three levels are at the 20-bar SMA ($33,300). $32,200 and 50-bar SMA ($31,350). These three support walls seem strong enough to absorb a large amount of selling pressure.

The daily price chart gives further credence to our overall bullish outlook. Firstly, the moving average convergence/divergence (MACD) shows increasing bullish momentum. Secondly, the parabolic SAR has reversed from bearish to bullish, which again shows that the bulls are in full control of the market.

Is There An Incoming Dump?

A crypto analyst going by “Panama Crypto” made an interesting observation. It seems that the number of Bitcoins in the exchanges has increased by a large amount.

This could mean that the buyers are moving their BTC to the exchange wallets to sell off their coins and pocket a profit.

The CCO of BitPay, Sonny Singh, said that he believes Bitcoin could reach $45,000 in the next month. In a recent interview with Bloomberg, Singh noted that giant firms might sell their digital asset holdings sooner than people might anticipate in a bid to make a profit.

A lot of the institutional buyers bought in around $20,000, so that would be my floor for how far Bitcoin could go down… All those buyers that bought in, they said ‘Oh were into Bitcoin now for a three to five-year time horizon,’ which is great, but I think if Bitcoin hits $45,000 USD next month or so, they’re going to say, ‘wow we just made 2x, you know, we don’t need that three-year horizon anymore, let’s start selling some.

Furthermore, Singh added another prediction suggesting that when Bitcoin starts hitting a significant price tag, governments and nationals are going to start buying the asset. He continued to explain that two-years ago, the concept of large companies adding Bitcoin to their balance sheets seemed far-fetched, but now major institutions are holding Bitcoin.

Bitcoin Is Now The 9th Most Valuable Global Asset

According to Asset Dash, the flagship cryptocurrency is now the ninth-most-valuable asset in the world. Just a few weeks ago, Bitcoin overtook VISA in the list. It soon increased its market cap by $70 billion to overtake Berkshire Hathaway, the company run by Bitcoin critic Warren Buffett. Currently, the top five companies on the list are Apple (2.23 trillion), followed by Microsoft ($1.65 trillion), Amazon ($1.62 trillion), Google’s parent company Alphabet ($1.18 trillion) and Facebook ($773 billion). 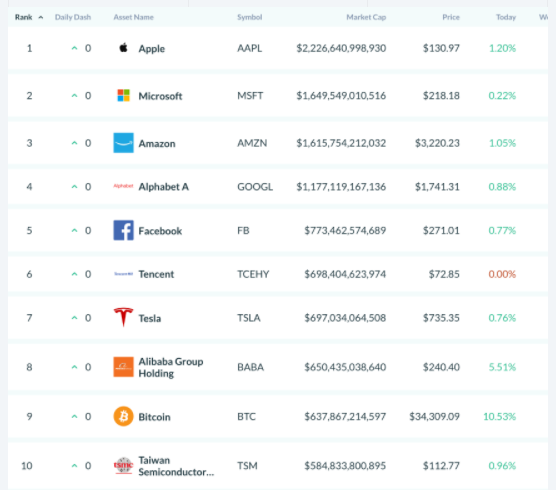 On a brighter note, Bitcoin can overtake companies in spots six through eight if it manages to keep up its upward momentum. Shares in Tencent are worth $698 billion, Elon Musk’s Tesla has a market cap of $697 billion and Alibaba is worth $650 billion, $12 billion more than BTC’s market cap.

A statistic by CryptoQuant has indicated that futures traders are risking less money every day as Bitcoin enters a price discovery zone. According to the metrics site's data, the average leverage in Bitcoin futures trades is continually dropping on several leading exchanges.

In a bid to explain this equation, CryptoQuant developed an indicator called the Estimated Leverage Ratio. The latter is obtained when an exchange's open interest is divided by the reserve deposited in the exchange. CryptoQuant noted that leverage is going down on Binance, BitMEX, Bybit, Huobi, and OKEx. These exchanges happen to control most of the trades in the whole cryptocurrency ecosystem.

This decrease in the average leverage could indicate caution in the middle of a price discovery phase. Traders are willing to risk less and less when opening positions because of the lack of historical references to sustain any prediction.

Many traders also worried about the much-feared correction. Assets that surge too high tend to fall back at some point, and BTC is no stranger to this reality. Traders who’ve opened positions will eventually want to cash out and reap their realized profits. The timing could be bad for those with sizeable leveraged betting positions on a continuation of the bull market.

CryptoQuant believes the Estimate Leverage Ratio is a good way to measure the risk that traders are willing to take. For this reason, the statistic should reflect the general market sentiment:

ELR for a derivative exchange tells us how much leverage is used by users on average. This information measures traders’ sentiment whether they take a high risk or low risk. If the ELR value is high compared to the last couple of days, it indicates traders are quite confident in their positions. Funding data such as funding rates may help traders to build a robust trading strategy with this information.

The numbers provided by CryptoQuant try to offer an objective oversight of the markets, considering a simple premise regarding risks - when leverage is high, traders believe a trend is strong. When it is low, traders are more uncertain about what could happen.

For BTC, it’s all about the $40,000 level. How are the buyers going to react when they reach that level? Have the coins been moving to the exchanges for holders to sell off the moment BTC reaches $40,000? We will need to wait and see how it pans out.