The Bitcoin price continues its meteoric rise, as BTC went past its previous all-time high, touching $67,083, setting a new all-time high. As indicated by the price chart, BTC has been extremely bullish throughout the month, as investors drove the price higher in anticipation of the ETF. The price surged as soon as the ETF was announced, marking a historic moment in the crypto space. Currently, BTC is at $66,420, but with the bullish sentiment, it could push higher.

Bitcoin Price Chart Indicates BTC Could Settle Above $66,500 during the current session

The Bitcoin price started the previous week on a bullish note, keeping in line with the prevailing overall bullish sentiment. On Monday, the price rose by 3.48%, pushing up to $57,198, before dropping to $56,170 on Tuesday. However, the price recovered on Wednesday, as it rose by 2.53% to settle at $57,591. After registering only a marginal increase on Thursday, the price rose drastically on Friday, as BTC surged by 6.85%, surging past $60,000 and settling at $61,552. 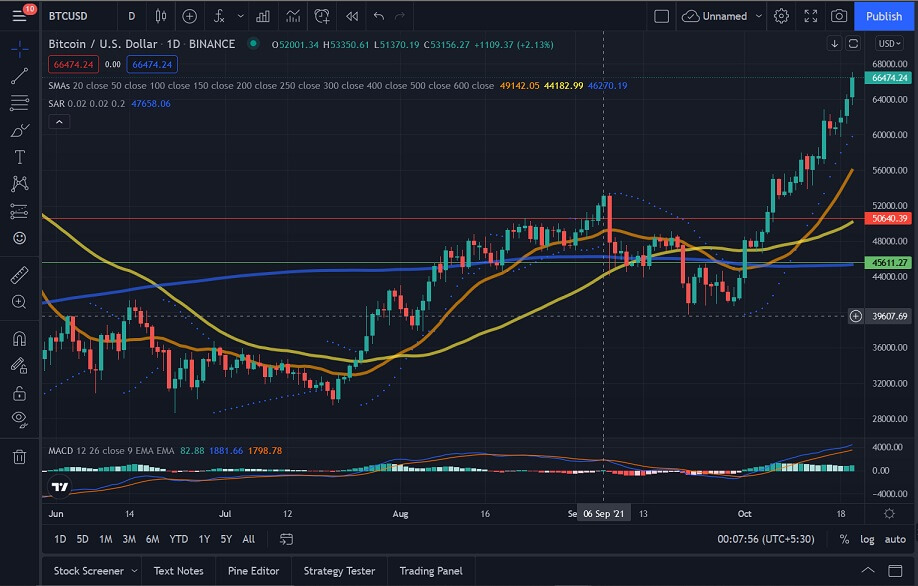 The Bitcoin price encountered a minor fall after reaching $61,552 on Friday, as the price dropped by 1.31% on Saturday, settling at $60,747. However, the price was back in the green, although it only registered a minor increase. The current week kept the bullish sentiment going, as BTC rose to $61,908 before rising by 3.43% on Tuesday and pushing beyond $64,000 to settle at $64,034. Crossing $64,000 for the first time since April brought BTC within sight of its previous all-time high, which BTC shattered as it rose to a high of $67,083, beating the previous all-time high of $64,888. Currently, BTC is at $66,470, and with the Parabolic SAR and MACD bullish, we could see the price rise further.

The 4-hour Bitcoin price chart indicates BTC’s bullish trend, with the 20-bar SMA acting as support. BTC had pushed above the 20-bar SMA on the 13th when the price rose to $57,444 and then to $57,998. However, after reaching this level, the price turned bearish, dropping to $57,271 before surging and pushing up to $59,307. The price rose further, pushing past $60,000 and settling at $61,552 on the 16th. After reaching this level, the price dropped as BTC fell to $60,430, where the 20-bar SMA was acting as support and pushed the price up to $61,339. The price fell back to $60,949, after which BTC turned bullish as the price rose to $64,199. After reaching this level, BTC surged to $66,722, surging past its previous all-time high, with the price touching its new high of $67,034. Although the current session has seen a minor drop, the MACD is bullish, indicating that we could see the price push higher, although it would be worth keeping an eye on the RSI, which is currently above the neutral zone. 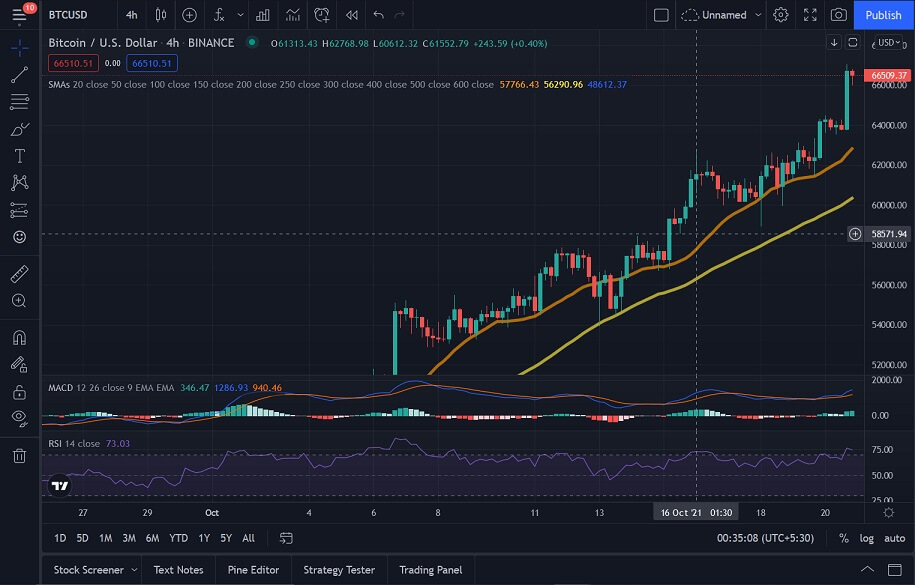 BITO, which debuted on the New York Stock Exchange, closed the first session with 23.103 million shares traded ($950 million), according to data from TradingView. Blackrock’s US Carbon Transition Readiness ETF, launched in April 2021, holds the record for opening day volume with $1.1 billion.

“I’m not surprised in the least by today’s volume. BITO’s strong debut is reflective of the pent-up demand among individual investors and advisors to access bitcoin price exposure via traditional brokerage and retirement accounts.”

BITO closed the session Tuesday 4.73% higher at $41.89. The world’s first bitcoin futures ETF sustained high volume throughout the trading session. Less than half an hour into the market open, 6.4 million shares had traded, or roughly $264 million. The volume hit $500 million just after 11:00 am EDT.

While there were doubts about how a futures-based product would perform given the amount of spot trading options available to investors and the fact that futures products come with roll costs, the overall sentiment seemed positive.

"As could be expected from a highly anticipated and highly discussed new product, the futures ETF is performing well, and attracting many investors who are looking for prudent ways to get more exposure to crypto. But the bigger significance is the strong signal it gives for increased regulatory approval and adoption of Bitcoin and crypto as a whole, indicated by the general price increases.”