Bitcoin Technical Analysis: BTC shakes off the cobwebs and continues to flirt with all-time high levels

Bitcoin is currently sitting on top of the 9-day SMA as the premier cryptocurrency shakes off the cobwebs before charting new all-time high levels. As of now, BTC is trending in a narrow $1,000 channel between $19,700 and $18,700. As we mentioned yesterday, BTC will likely go through a retracement before it enters the all-time high territory.

BTC to briefly drop before recovering

Bitcoin has flashed the sell signal in the weekly chart with a green-nine candlestick in the TD sequential indicator. The last time BTC did this in the weekly chart, it dipped from $9,760 to $9,195 in 7 sessions. Along with this, the relative strength index (RSI) is trending in the overbought zone, which shows that the asset is overpriced, and a correction may be in order.

Adding further credence to our short-term bearish outlook is the MACD (moving average convergence/divergence) in the daily chart. This indicator shows that the overall market momentum of the asset is bearish. Now, the next question to ask here is, just how far is the price going to fall during this retracement?

Looking at the daily chart, one can see that the 9-day Simple Moving Average (9-day SMA) has consistently acted as a healthy support level for the price. So, it may be possible that the curve straight-up denies any further downward movement for the asset. However, below that, the price has two healthy support walls at $18,700 and $17,000. These two support zones should be robust enough to absorb a reasonable amount of selling pressure.

Read Also: Bitcoin Price Prediction Forecast: How Much Will Bitcoin Be Worth In 2021 And Beyond?

As reported by yesterday, Microstrategy, the business intelligence firm, announced that they had purchased a further $50 million worth of BTC. However, it looks like they are far from done. In a press release, the company said that it is planning on raising $400 million via senior convertible notes. This will be a private offering and will only involve qualified institutional buyers. Plus, MicroStrategy will use the net proceeds to buy more Bitcoin.

Edward Snowden reveals a startling fact about BTC and USD

Edward Snowden is a famous whistleblower and is responsible for leaking highly-classified  NSA documents, regarding mass-surveillance, to the public. In a tweet, he pointed out that Bitcoin has been pretty much eating up the dollar’s valuation over the last ten years. 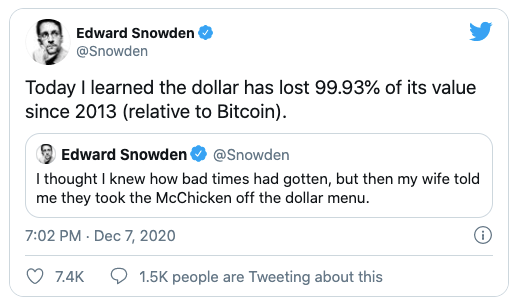 According to Snowden, the US dollar has lost 99.93% of its value, relative to Bitcoin over the last decade. This could be pretty monumental as BTC looks to break past $20,000.

On the flipside, if any one of the support zones remains strong, it should encourage the price to bounce up and break past the $19,700 resistance barrier. Doing that will be enough to take BTC into the $20,000 zone.