Over the last three days, the Bitcoin price has jumped from $47,800 to $51,900, gaining >$4,000 in overall valuation. Due to this jump, the RSI, which was hovering along the edge of the overbought zone and climbed higher. This could indicate that a bearish correction is around the corner.

The 4-hour Bitcoin price chart tells us that the overall market momentum is still bullish, so a further growth is definitely in the cards.

Peter Brandt, a veteran trader, said that Bitcoin is in the middle of yet another parabolic advance. 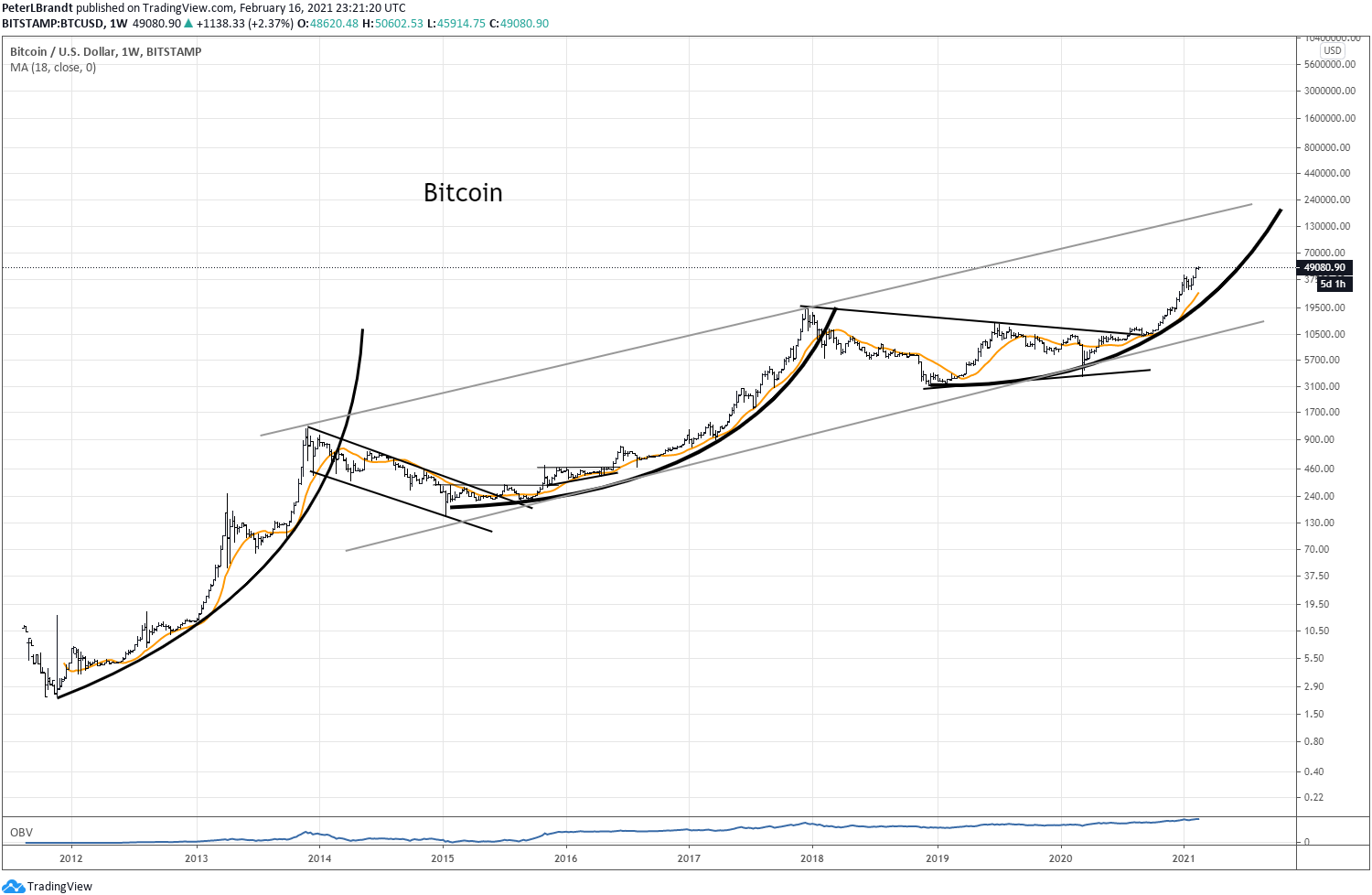 According to the chart, the parabolic advance started late in 2018 when Bitcoin was at roughly $3,100. The asset is up 1,331% since that level. Brandt said that seeing three parabolic advances on a logarithmic chart in the span of ten years is truly “historic.” He has almost 45 years of trading experience.

Mathematically, parabolic advances are identified by the increasing angle of ascent. Traders generally are on the lookout for such formations due to promising immense returns. Brandt had also cautioned against investing when a parabolic advance becomes obvious.

“A cautionary message about parabolic advances: Once a parabolic advance is obvious, it is way to late to be a buyer. The train has left the station. If you do not already own a market by the time I point out a parabolic trend, then don't buy based on my chart”

Parabolic trends can be very uncertain since it is very difficult to time the top when the buying frenzy maximizes and numbers just keep going up. However, immense upward moves cannot be sustained for a long time. This is why they are usually followed by sharp trend reversals.

Back in January 2018, Brandt noticed that Bitcoin’s previous parabolic advance had been violated. It was followed by an 80% correction, which he had accurately predicted. Now, Brandt expects that a similar drawdown could occur as soon as the ongoing parabolic move is over.

80% corrections are most common when parabolic advances are violated.

Gartner conducted a recent survey that found that 5% of companies intend to invest in Bitcoin (BTC) as a corporate asset in 2021. 11% of the total 77 respondents said that they could do so by 2024.

All the survey participants, including 50 CFOs and other executives, showed highly differing views based on various industries. The technology sector led the most interest in Bitcoin. 50% of respondents from this industry expect to hold the cryptocurrency in the future, irrespective of the organization’s size.

The majority of the surveyed (84%) stated their main concerns about investing in the financial risk that comes from Bitcoin’s high volatility. Others seem to have adopted a wait-and-see approach.

More than 70% of the participants stated that one of the main things they want to know is what others are doing with Bitcoin. Gartner chief of research Alexander Bant noted:

Other concerns expressed by the respondents included board risk aversion (39%), slow adoption as an accepted form of payment (38%), lack of understanding (30%), cyber risks (25%), and complex accounting treatment (18%).

The study represents a significant increase of awareness from Gartner's 2018 survey in which only 66% of CIOs knew about blockchain technology.

We expect the Bitcoin price to break past $52,000 mark and consolidate itself above this psychological level.