Tesla CEO, Elon Musk, made a huge announcement on Twitter:

Not only that, he further clarified:

“Tesla is using only internal & open source software & operates Bitcoin nodes directly. Bitcoin paid to Tesla will be retained as Bitcoin, not converted to fiat currency.,...Pay by Bitcoin capability available outside US later this year.”

The Bitcoin price reached a peak of $61,200 on March 14. Since then, the premier cryptocurrency has been under heavy bearish control dropping to $54,000, flipping the 20-day SMA from support to resistance. However, the 2-month upward trending support line has stepped up and prevented further drop in valuation.

The IOMAP confirms that the strong support line is at $54,000m which coincides with the upward trending line. A little over 800,000 addresses had purchased a whole 525,000 BTC tokens at this level.

Jerome Powell, the chairman of the US Federal Reserve, recently shared his views on Bitcoin. He said that while cryptocurrencies are “not backed by anything,” they are still capable of serving as a “substitute for gold.”

During a video conference hosted by the Bank for International Settlements, Powell initially expressed criticism toward cryptocurrencies, calling them “an asset for speculation.”

Crypto assets are highly volatile—see Bitcoin—and therefore not really useful as a store of value. They’re not backed by anything. They’re more of an asset for speculation.

However, he pointed out that Bitcoin is currently moving into the territory of gold.

It’s essentially a substitute for gold rather than for the dollar.

At the same time, Powell acknowledged that stablecoins are “an improvement” over crypto assets.

To an extent, a stablecoin is backed by sovereign currencies of leading nations, that is certainly an improvement over crypto assets, I would say,” Powell noted, adding, “But nonetheless, where does the credibility come from? It comes from that sovereign currency that is the backstop.

Speaking about CBDCs, Powell explained that the Fed could potentially develop one in the future. He noted that it would require strict regulation, research and a careful review.

Stablecoins may have a role to play with appropriate regulation, but that role will not be to form the basis of a new global monetary system. A global currency governed by the incentives of a private company is something that will deserve and will receive the highest level of regulatory expectations.

The total number of non-zero Bitcoin addresses recently hit an all-time high of 36,896,000. At the peak of Bitcoin’s last bull run, there were 28 million active, non-zero BTC addresses. When the prices dropped from the highs of $19,000 to $6,000, that number sharply decreased by nearly 7 million (25%). 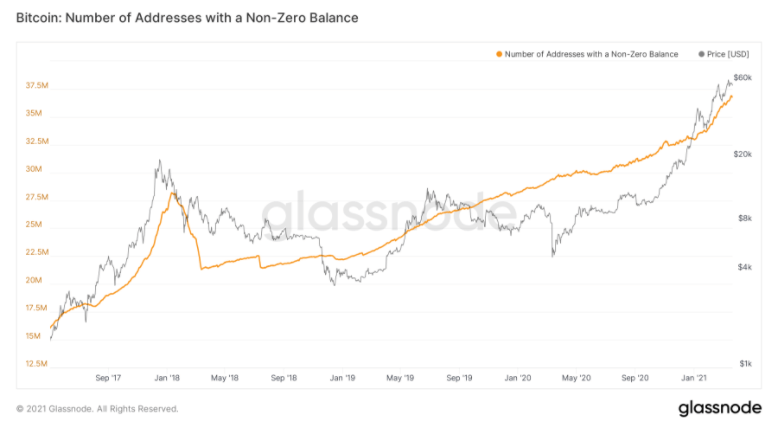 Bitcoin appears to no longer be just a niche investment. According to Statistica, the number of crypto ATMs across the globe increased by 750% since 2018. This year alone, firms like Square and Paypal started facilitating crypto payments. Major corporations like Microsoft also began accepting Bitcoin as a valid form of payment.

Historical data suggests that the number of non-zero addresses has not been a dependent variable of BTC’s price action since late 2017 and early 2018. Still, a strong growth in the number of wallets hints that Bitcoin has much more room to grow.

The Bitcoin price may climb along the upward trending line and reach the $57,000 line. However, the Musk tweet may push another rally to $60,000.