Binance Coin’s 70% downfall from the all-time high in May embraced support at $210. The freefall failed to find support at various levels, including $480,400 and $280. The last couple of weeks were spent by the bulls battling for recovery. However, gains above $400 have been a challenge to achieve.

Meanwhile, Binance Coin trades at $353, unable to crack the immediate hurdle at $360. If overhead pressure keeps rising, the bearish leg may extend to $330, thereby bringing BNB closer to a potentially massive breakdown due to forming a continuation chart pattern.

The four-hour chart reveals the formation of a pennant pattern. According to Investopedia, a pennant is a continuation pattern formed after a huge movement in an asset, referred to as a flagpole. It is then followed by a consolidation period between two trend lines.

The consolidation resulted in a breakout in the same direction as the initial movement, giving way to the second half of the flagpole. To validate the pennant, the initial move is characterized by a large volume, followed by weakening volume (consolidation), paving the way for a spike in volume (the breakout). 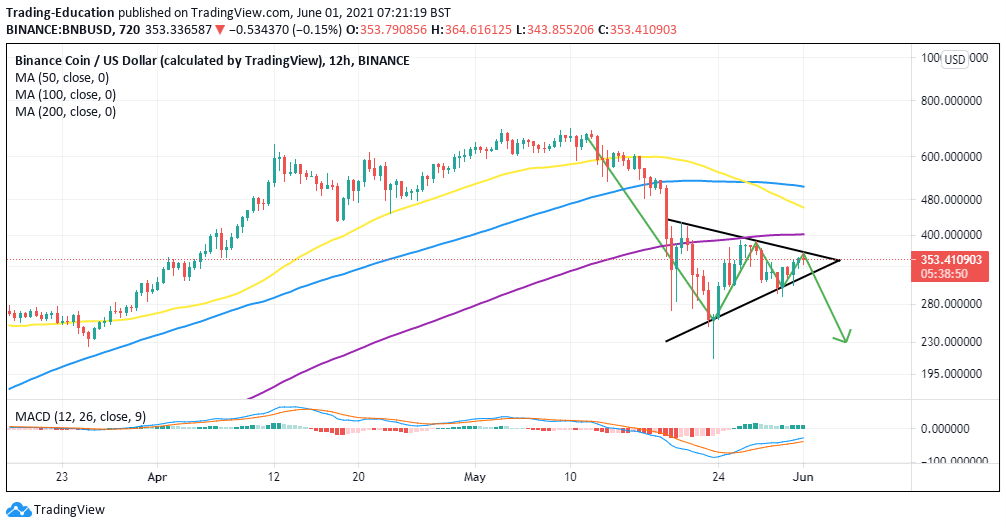 Meanwhile, it is essential to note that the Relative Strength Index (RSI) already shows the bulls’ weakness in the mission to lift above $400. Moreover, the price displays signs of diving under $350, bringing Binance Coin closer to the pennant pattern breakout point.

As reported last week, numerous Binance Smart Chain (BSC) based decentralized finance (Defi) platforms have suffered attacks, with perpetrators making away with millions of investors’ funds. The blockchain network has come out with “a call to action” directed to developers. According to the announcement by BSC:

“There are >8 #flashloan hacks recently, we believe, well-organized hackers are targeting #BSC now. It is a very challenging time for the BSC community. We are calling for the actions for all the #dapps.”

The BSC went ahead to issue steps developers can undertake to ensure the security of their platforms on the blockchain. For instance, they have been advised to “work with audit companies to do another health check” and “apply necessary risk control measures to monitor any abnormally in a real-time manner actively and pause the protocol of any abnormally indeed occurs.”