Binance Coin resumed the downtrend after running into a thick barrier at $425. The Binance exchange native token has in the last couple of weeks sustained a downtrend that tested support at $315. This allowed bulls to champion for a recovery during the weekend session, whereby the price swung to $360.

The immediate downside has been capped under a confluence resistance created by the 50 Simple Moving Average (SMA) and the 100 SMA on the four-hour chart. Closing the day above this level is crucial to achieving the 27% breakout target.

The four-hour chart brings to light a falling wedge pattern on the four-hour chart. This chart pattern is highly bullish and mainly forms in a downtrend. A bullish reversal pattern is drawn using two trend lines, connecting the sequential lower highs and lower lows.

A breakout is expected before the trend lines meet. Note that the pattern starts with a considerable volume, but it dwindles as the lines pattern contracts. A breakout occurs when the price slices through the upper trend line.

An increase in volume accompanies the price action; moreover, wedges have precise targets measured from the highest to lowest points—for instance, Binance Coin’s 27% upswing to $438. 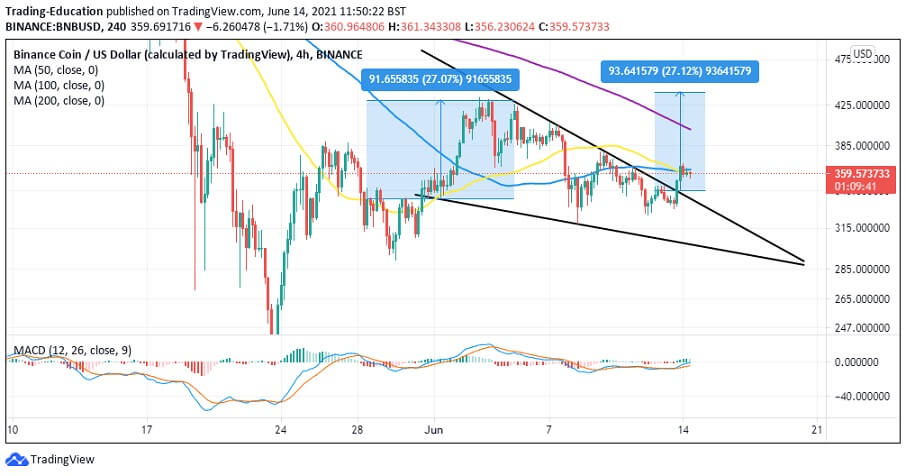 A comprehensive look at the four-hour chart brings to light a bullish impulse from the Moving Average Convergence Divergence (MACD). The indicator follows the asset’s trend and measures its momentum. The uptrend will gain traction with the indicator crossing into the positive region, especially if the confluence resistance is broken. Subsequently, the MACD line recently crossed below the signal line, thus presenting a buy signal.

The resistance presented by the 50 SMA and the 100 SMA seems robust and may hamper the expected growth. An increase in overhead pressure could jeopardize the support at $345. Note that Binance Coin recently tested support at $315; hence a rebound is expected from this buyer congestion zone.

Binance
BNB
Top Brokers in
All Regulated Brokers
67% of retail clients lose money when trading CFDs with this provider.