Binance Coin hit an all-time high of nearly $700 in May, suggesting to investors that $1,000 was a matter of when not if. However, the crash in the market that Bitcoin mainly triggered saw BNB lose an enormous chunk of the gains this year.

The four-hour chart shows that Binance Coin embraced support at $215, allowing bulls to come back in action. A considerable recovery has been made since the beginning of the week, but the bullish momentum lost steam around $400, amid a resistance brought about by the 200 Simple Moving Average (SMA).

According to an announcement made by BurgerSwap, users affected by the heist will be covered. At the moment, all trading activities have been suspended to allow the team to concentrate on the issue.

Attacks on tokens powered by BSC have become frequent. JULSwap experienced a similar attack that led to a 95% price crash, while PancakeBunny saw $45 million defrauded from the protocol last week.

Binance Coin could embark on a significant retracement following the barrier at $400. At the time of writing, bulls battle to secure support at $320; however, the price is slightly under $350.

All short-term technical indicators flipped bearish, starting with the Relative Strength Index (RSI). A gradual retreat from levels close to the midline stresses the growing bearish grip. If support at $320 fails to hold, investors should expect another uncontrolled dip to the major support at $265 and $205, respectively. 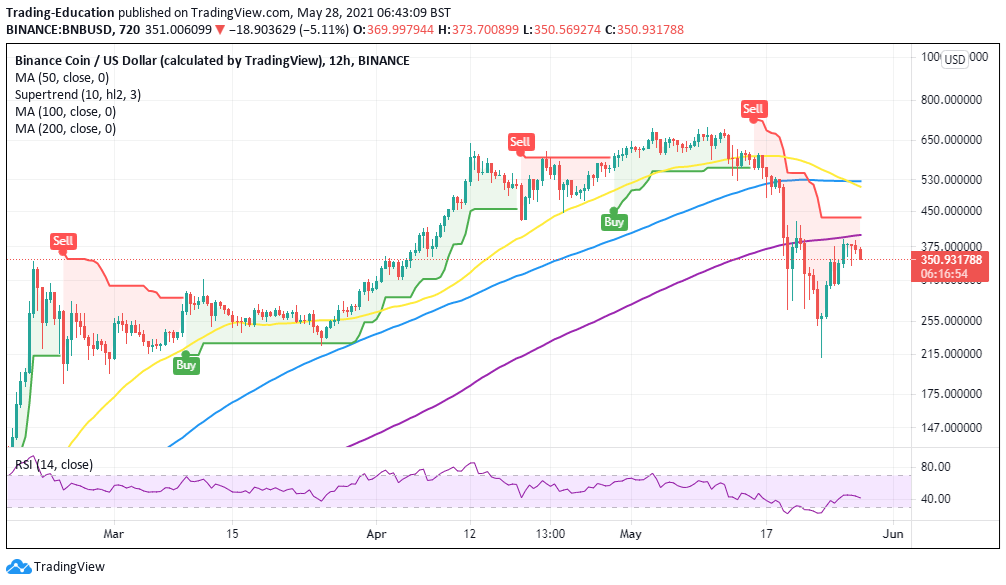 Note that the SuperTrend indicator has had a massive and persistent sell signal on the 12-hour chart since mid-May. The call to sell was presented amid the crypto market crash, whereby the SuperTrend turned red from green and moved above the price. If the technical picture remains unchanged, declines are bound to intensify.