Binance Coin reclaimed the ground above $400 last week, almost touching $440. However, the uptrend slowed down, a move that must have given bears leeway. Initially, support at $400 kept the bearish advances at bay, especially during the weekend session.

The technical levels continued to weaken on Monday, preceding the ongoing breakdown. After the anchor at $400 was shattered, massive sell orders were triggered. An increase in selling pressure jeopardized the subsequent buyer congestion at the 50 Simple Moving Average (SMA).

According to the four-hour chart, the bearish leg stretched past the 100 SMA and the next tentative support at $350. Meanwhile, Binance Coin barely holds above $340 amid fast bearish building momentum.

Binance Coin downtrend far from over

Losing the support at the 100 SMA worsened the technical picture. Overhead pressure is exceptionally high, as highlighted by the Relative Strength Index (RSI). This technical indicator follows the trend of an asset and measures its momentum. Moreover, the RSI also shows overbought and oversold conditions.

The general Binance Coin condition is not oversold yet; therefore, more losses can be expected in the near term. If the buyers' congestion at $340 fails to hold, BNB will continue hunting for another pit stop toward $300. Note that the exchange-based token dropped to $210 in May; the possibility of such a massive drop could become apparent. 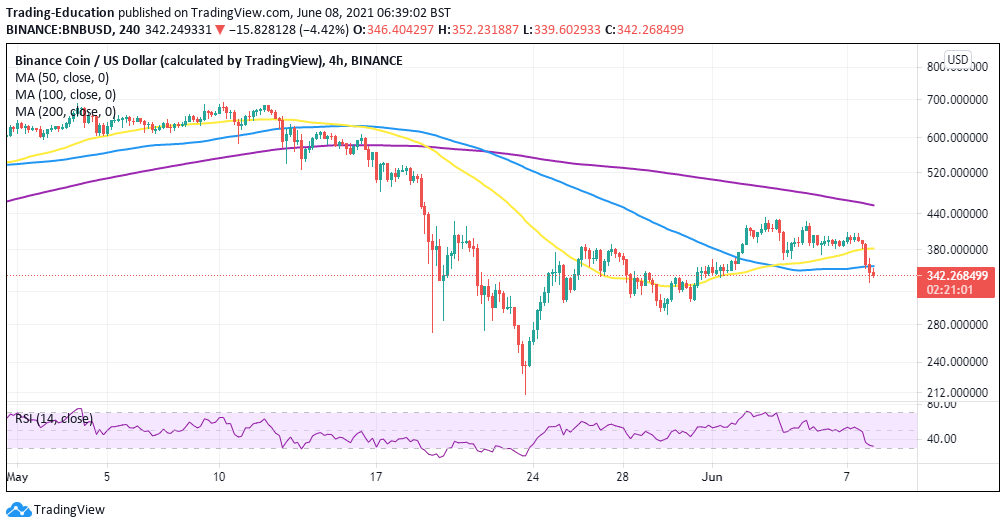 It is worth mentioning that the SuperTrend indicator and the Moving Average Convergence Divergence (MACD) have a bearish signal, as observed on the four-hour chart. The SuperTrend flipped bearish amid the drop from highs above $400. If this technical picture holds, we can anticipate further declines to $300.

The MACD has just crossed into the negative region (below the mean line). Besides, the MACD line (blue) adds credence to the bearish look by increasing the divergence below the signal line. It is imperative to know that Binance Coin's least resistance path is downward, and the market may stay bearish in the coming sessions. 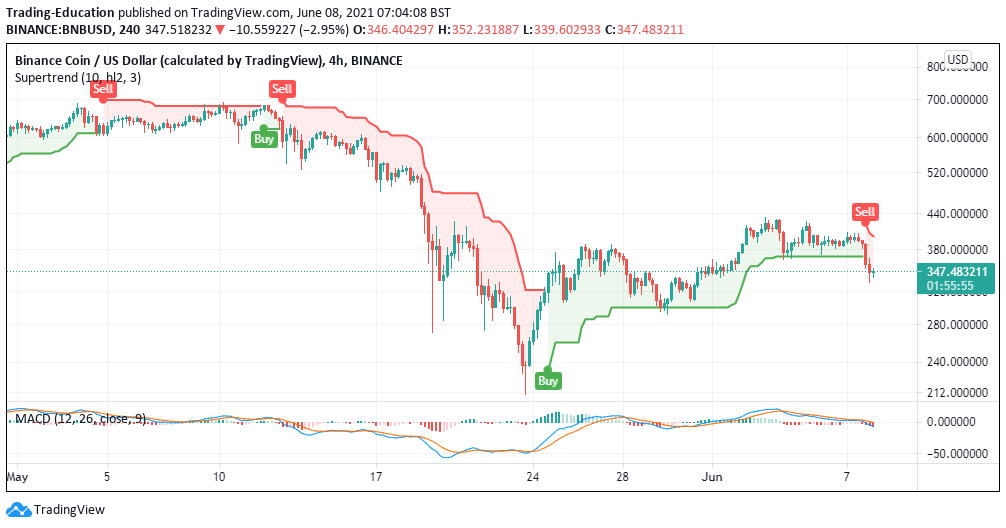 The bearish outlook to $300 will be invalidated if the support at $340 firmly holds. With the critical anchor in place, BNB bulls will begin working on a recovery mission toward $400. It is essential to realize that the broken support levels have transformed into hurdles. Hence, delays should be expected at $380 and $400, respectively.