Can Cardano Realize the Target of $10 Any Time Soon?

Cardano is one of the best performing tokens in the cryptocurrency market currently. This has created discussions on whether the ADA coin can reach $10 any time soon. There is exciting news about the Cardano network, and buyers are rallying support, so a rally towards $10 could happen soon.

Several factors will influence the Cardano ADA rally beyond $10. The first is that the network is about to become a major DeFi hub for developers. If this happens, Cardano will be in league with Ethereum. If it manages to offer low latency and speeds, we could see it becoming an even better alternative to Ethereum for developers.

DeFi plays an important role in the prices of cryptocurrencies because developers who want to launch on the network will need ADA. This increases demand for the coin, which ultimately pushes prices up. Looking at ether prices, this year's massive boom has been attributed to heightened DeFi activity despite the platform grappling with high fees and slow speeds.

Another reason for Cardano to cross the $10 mark price is the recent proposal by Cardano's founder for developers to create a token burning mechanism that will reduce the supply of ADA. Hoskinson proposed this recently in a video interview. While there has not been any official communication if such a mechanism was being developed, it shed a positive light on ADA's future prices.

There is a total maximum supply of 45 million ADA tokens, and only two-thirds are in circulation. Hence, prices could be affected if the remaining tokens are released into supply. However, if ADA has a system that allows token burning, we could see Cardano prices shoot upwards towards $10, especially if demand remains high.

If the bulls continue and market and buyer support step in, we could see ADA reaching $10 in the coming months.

What's New in the ADA Rally

The ADA rally in the past month has not just been ignited by support from the broader market, but heightened activities on its blockchain also have a part to play.

Recently, Cardano announced that it would be launching the Alonzo hard fork upgrade, which saw the buzz surrounding the coin increase. The upgrade is expected to bring smart contracts into the Cardano network and improve the whole user experience for the network. The announcement regarding this update happened shortly after Ethereum installed the London hard fork upgrade.

One of the reasons Cardano has never been a formidable competitor to Ethereum is the lack of smart contracts ability. The upgrade, which happened on September 12, will allow the network to host the DeFi market and become a highly utilized blockchain.

Since this announcement, ADA has gained massively, reaching a high of $3.10 in September. This is a significant gain for the coin, given that before this rally, it was trading at below $2. The smart contracts also make this rally different, because unlike in May when ADA reached a high of $2.35 because of market support, buyer support is stepping in, which means that a reaction to dips from the broader market could not happen.

Cardano's founder, Charles Hoskinson, has also aired his optimistic thoughts on a massive ADA rally. According to Hoskinson, ADA will hit $150 before the end of the year, which could mean an over 60 times price gain, given that ADA is currently trading at $2.15.

On the other hand, traders in the crypto sphere always have to be ready for unpredicted price volatilities. Besides, the ADA coin is currently one of the most bought in the market, and it could soon reach an overbought level. If Cardano reaches highs of $10 and buying support is exhausted, a correction could happen before another rally commences.

Check Out: What Will Cardano Be Worth In Five Years? 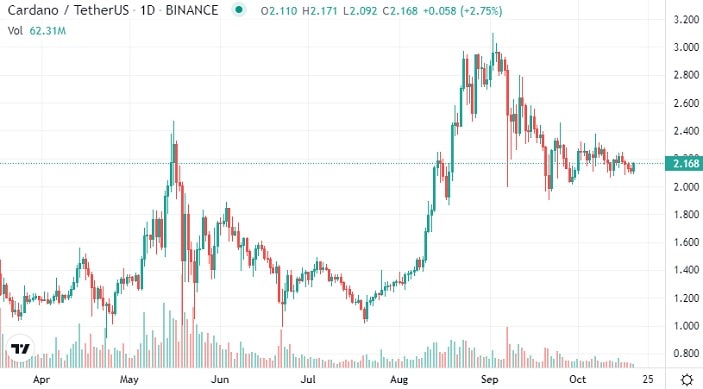 Before the crypto bulls started, ADA was trading at below $1.20. This means that the current value is over two times higher. Market support ignited the rally, but later on, buying support kicked in following the news of the Alonzo hard fork, which has caused the massive uptrend.

ADA has slumped a little in prices, given that it had managed to reach an all-time high of $3.10. However, the coin failed to maintain this level and instead went to lower levels to ignite a bull run. The slump that happened at this level could have been caused by selling pressure from traders who want to sell in case of another dip. However, the dip to the current $2.15 could also attract new buyers to Cardano, who felt left out during the recent bull rally. Hence, we could see ADA go beyond $3.

In summary, we could see ADA headed towards more gains, given that in just one month, it has more than doubled in value. Increased utility for the network made possible by the smart contract upgrade is poised to give Cardano an edge in the market. ADA missed one factor in previous rallies, but it now can shoot if Cardano becomes a major DeFi hub.

In terms of short-term price movements, the ADA rally will increase towards September as the crypto community awaits the hard fork to be implemented. This rally will break the $3 barrier, and at this point, Cardano will be poised for a significant bull run towards $10 and beyond before the end of the year.

Why Cardano Is So Cheap?

11 Reasons Why You Should Invest in Cardano ADA Today

How to Stake Cardano