Can Ethereum Realize The Target Of $10,000 Any Time Soon?

Crypto analysts and predictors have revealed that the Ethereum coin will be valued at $10,000 by year-end.

So far, Ethereum has had enough momentum to inform the said predictions. For the first time since the May crash, the crypto has reached past the $3,180 mark. This shows Ethereum's ability to significantly grow its share within the market capitalization in the entire crypto space.

The journey taken by Ethereum towards its current market position has not been easy. The crypto has been a victim of different forms of criticism by the crypto community, first for its extremely high transaction fees, then because of its slow-paced development in the 2.0 version. The emergence of market competitors such as Polkadot, Solana and Cardano has made the journey tough for Ethereum.

Despite the challenges, Ethereum remains among the most popular developments in the entire crypto environment. This is well exemplified in the number of Decentralized Finance Apps and NFTs that employ the Ethereum blockchain.

Since early this year, Ether traded slightly above the $1,200 mark. This drove some investors to predict that the crypto would rise to around $3,000 once investors stopped overlooking ETH. In not more than five months to come, around May and June, Ethereum lived to the investor's prediction hitting past the estimation to record almost $3,500. The predictions later changed and currently stand at $8,000 and $10,000 before the end of the year.

The ETH network intends to challenge the traditional methods Bitcoin employs and plans to use a more contemporary approach where transactions are confirmed in a less energy-intensive way.

Ethereum would be different from the proof of work that describes Bitcoins' mode of operation to reward miners that rival each other in computer application and energy consumption to record and confirm transactions on Bitcoin's network. Instead, Ethereum embraces a more effective proof of stake mode of operation, where block validators are chosen randomly depending on the amount of Ether the block validator controls.

By moving from proof of work to proof of stake for block validation purposes, Ethereum significantly reduces carbon emissions by a 99.91% value. As such, ETH will be more of green technology, something the crypto ecosystem and the entire world would be quick to embrace.

With the two developments credit to the Ethereum blockchain network, chances of Ethereum advancing to the $1 trillion market capitalization that Bitcoin boasts of today is a realizable dream and would push the value of Ethereum to between $8,000 and $10,000 per coin.

Crypto asset investing is highly volatile and unregulated in some EU countries and the UK. No consumer protection. Tax on profits may apply. 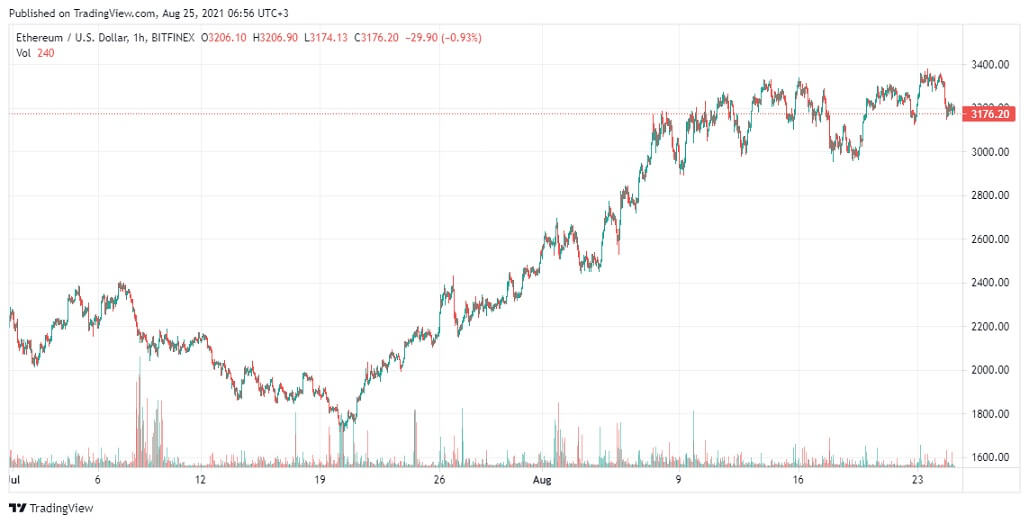 Ethereum's price has been on a significant rebound since late July. The token has managed to almost double in value within one month and is currently trading at around $3200. Despite the market volatility creating rapid price movements, Ethereum has managed to show growth potential.

Many reasons are supporting the potential of Ethereum value to realize the $10,000 price target. Among these include:

Marginal percentage between ETH and BTC

The first massive boom witnessed in the crypto space was between 2017 and the beginning of 2018. During this time, Bitcoin was in the lead position in terms of value. However, Ethereum, standing in the first runners up position in terms of size in market capitalization within the global market, caught up with Bitcoin by a very narrow difference regarding the amount of capital collected under Ethereum.

Conversations have changed notably because of reports and background checks that come from the crypto ecosystem. For instance, Bitcoin is often described as digital gold. In their analysis, digital gold has been a global leader in terms of value so far. There have also been more spotlights for other players in the crypto space, which are now establishing themselves in the general crypto environment as enabled by Decentralized Finances and Web 3.0 apps.

Regarding discussions like smart contracts, Decentralized Finance and dApps, the ether takes the leading position when the crypto's blockchain is considered. Ethereum's blockchain has been developed to survive very complicated tasks. This attribute makes it able to attract new investors despite rough markets.

Reduction in transaction fees for the Ethereum ecosystem

Positive hope exists for the success of the EIP-1559 improvement plan to cut down on transaction fees within the Ethereum ecosystem significantly. For purposes of certainty, such a boost on Ethereum is still a work in progress. Nonetheless, supposing the improvement proposal were to be implemented before the year closes. The achievement would set in motion an automatic buyback structure for Ethereum, which would lead to burning.

Ultimately, there would be no issues with Ethereum inflation, especially because the transaction charges would cut down to more reasonable rates. With such an outcome, Decentralized Finance would benefit.

Calculations by reliable crypto analysts on their individual and joint price targets for Ethereum display an upward trend over the network's market capitalization. This is made possible because of the increasing number of decentralized applications that are constantly being built on the blockchain. DeFi apps, known to allow crypto enthusiasts to earn results on their cryptocurrency assets the same way they would if they were using the ordinary banking system, have also witnessed application over the ETH network. This usage massively grew from a $10 billion mark in late 2020 to a $65 billion mark in early 2021.

Following the implementation of the planned changes within the ETH network, Ethereum is expected to draw in explosive institutional interest. So far, Chinese miners alone are responsible for more than half of Ethereum's mining power. As the months go by, more investors will progressively notice the connection and propel the value of Ethereum to and beyond the $10,000 price target.

Crypto asset investing is highly volatile and unregulated in some EU countries and the UK. No consumer protection. Tax on profits may apply.

Is It Too Late To Buy Ethereum?

What's the Future of Ethereum?

Is It Worth Staking Ethereum?

Will Ethereum Make Me Rich In Ten Years?