Since March 21, the Cardano price has been trending between the 50-day SMA and the $1.24 resistance barrier. Over the last three days, the buyers have been in full control of the market as ADA rose from $1.16 and $1.24, flipping the 20-day SMA from resistance to support.

The relative strength index for Cardano price in the daily chart shows that the buyers and sellers are cancelling each other out in the neutral zone. The Bollinger band has started to slowly contract, which tells us that the volatility is decreasing.

cFund, an ecosystem venture fund managed by Cardano, announced its investment into COTI on an equity-based deal to accelerate the integration and deepen the cooperation between COTI and Cardano.  David Siemer, General Partner of cFund, said:

“cFund is excited to invest in this new opportunity. Shahaf and the team will bring significant adoption to the Cardano blockchain with COTI’s business partnerships and innovative enterprise-grade fintech technology. We at Wave have been long-time supporters of COTI and are thrilled to continue to support this great team.“

Cardano May Have Signed A Deal With Ethiopian Government 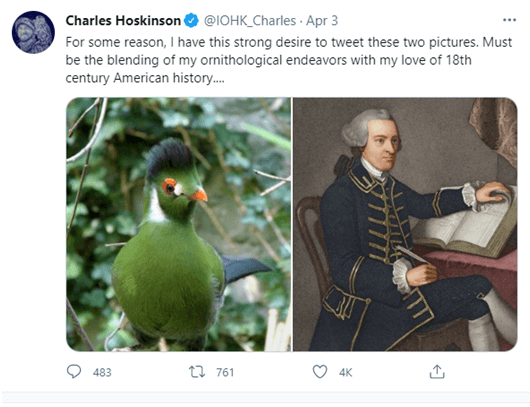 For some reason, I have this strong desire to tweet these two pictures. Must be the blending of my ornithological endeavours with my love of 18th century American history...

One of the photos he shared contains a Turaco bird with an Ethiopian origin. The other image is of John Hancock, an American merchant and former president of Congress during the Declaration of Independence. He is known for his large signature on the Declaration.

The crypto community is now awaiting the official confirmation of the arrangement. Hoskinson had revealed that the deal would be announced in March. However, it was reportedly delayed due to bureaucratic hurdles.

Earlier, Hoskinson noted that the agreement had gone through the necessary stages, including approval from a special committee. The last step was getting the signature of the relevant minister.

The Cardano blockchain will potentially fuel the Ethiopian national citizen identification system in addition to other operations. The new electronic system aims to identify every citizen and resident in Ethiopia securely.

Cardano Price Is Expected TO Reach These Levels

Unless something major happens, the Cardano price is going to keep trending horizontally below $1.24.