The Cardano price crashed from $1.84 to $1.57 between June 4 and June 7 and managed to flip the 20-day SMA from support to resistance. Since then, ADA had two bullish sessions but again failed at the 20-day SMA before this Thursday’s crash.

Cardano Price On The Verge Of Flashing Buy Signal

This Thursday, the Cardano price crashed from $1.62 to $1.53 – losing almost $0.1 in its overall valuation. During this crash, ADA managed to flip the 20-day and 50-day SMAs from support to resistance. The relative strength index shows that ADA can drop a lot more before it gets oversold. However, on the plus side, the TD sequential detector is on the verge of flashing a buy signal in the form of a red-nine candlestick.

Looking at the IOMAP, we can see that the Cardano price faces crucial support at the $1.50 line Previously, at this level, almost 52,000 addresses had purchased over 967 million ADA tokens.

Crypto analyst Michaël van de Poppe recently said that Ether (ETH) and Cardano (ADA) are waiting for a signal before launching massive breakouts. Van de Poppe tweeted that despite the bearish look of the crypto market, altcoins are still just in a consolidation phase against Bitcoin.

The trader noted that once BTC can finally find a bottom, Ethereum (ETH) and Cardano (ADA) will blast off to new 2021 highs. He said:

ETH and ADA are knocking on the doors of the yearly highs and are eager to breakthrough. I think they will once Bitcoin is bottomed.

According to Van de Poppe, ADA/BTC is attempting to target a new yearly high somewhere in the 0.000062 area, which would represent potential gains of over 30% from its current prices. 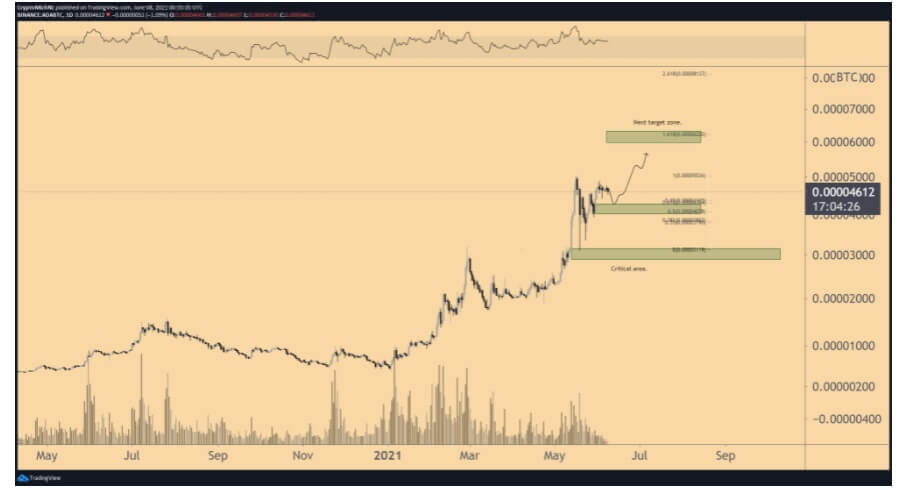 The analyst also shed light on another altcoin that has been showing signs of life. Van de Poppe said that Tezos is finding support on crucial moving averages (MAs) against Bitcoin (XTZ/BTC) as it gears up for the next leg of its bull run.

Tezos holds the 100-day and 200-day MAs here, which looks like we’re going to have a continuation of the bull cycle.

The trader added that sentiment in the broader crypto markets is looking significantly bleak. According to him, this could be a bullish signal.

The sentiment is getting back to the funeral state. Lovely!

Let’s see how this sentiment is going to be in a month from now.

If the $1.50 support line doesn’t hold, the Cardano price will likely drop to the $1.35 support wall.