Since March 25, the Cardano price jumped up from $1.07 and reached $1.21 at the time of writing. Over the last 4 days, ADA has been hovering around the $1.20 support line. Let’s take a closer look with technical analysis.

Having conquered the $1.20 support line, Cardano now faces strong resistance at the $1.25. The relative strength index (RSI) shows that ADA still has some space to grow. The MACD shows that market momentum is about to reverse from bearish to bullish, which is another positive sign.

Now, looking at the IOMAP, one can tell that $1.25 is the only resistance barrier of note upfront. At this zone, over 45,000 addresses had purchased around 1.6 billion ADA tokens.

Here Is The Roadmap for Cardano Smart Contracts

Charles Hoskinson, the CEO of IOHK and the creator of Cardano, discussed the development roadmap for smart contracts on the Cardano network. During the recent “Cardano360” virtual conference, he said that the blockchain network is moving towards the next phase - Alonzo.

And now we are heading toward what’s called the Alonzo Phase… And here’s kind of a timeline of how that works. So first off, it has to be integrated into the ledger in node code. That’s the heart of Cardano. Then the wallet sits on top of it, then Daedalus. OK, so, what’s occurring right now, all throughout March and all throughout April, is that integration into the node to get ACLI.

Hoskinson noted that the team is likely to launch the Alonzo testnet by the end of April or early May. In other words, people will be able to write smart contracts and deploy them on Cardano publicly for the very first time, he added.

Hoskinson mentioned that it is “extraordinary” to see something that started as a dream slowly come together to work efficiently. 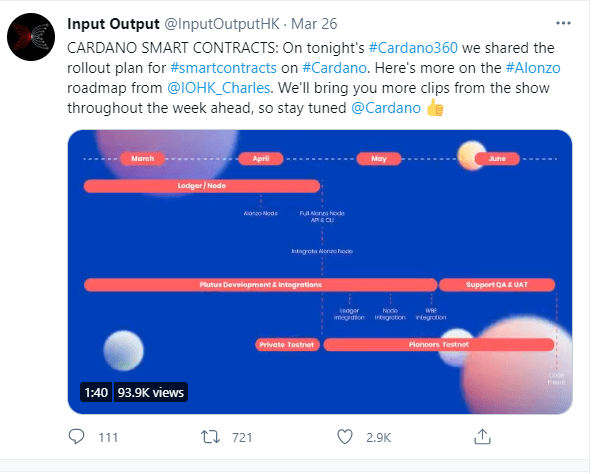 CARDANO SMART CONTRACTS: On tonight's #Cardano360 we shared the rollout plan for #smartcontracts on #Cardano. Here's more on the #Alonzo roadmap from

We'll bring you more clips from the show throughout the week ahead, so stay tuned

Cardano price will pick up positive momentum and break past the $1.25 resistance barrier and make its way to $1.35.