Cardano price is currently trending horizontally below the $0.35 resistance barrier. On January 22, ADA jumped up from the $0.31 support wall but has repeatedly failed to conquer the $0.35 line.

Cardano price is presently stuck between the $0.35 resistance and the 20-day SMA. Looking at the three latest candlesticks, we can see that the bears repeatedly attempted to break below the 20-day SMA but have failed to do so. It seems like ADA is destined to trend horizontally between these levels that refuse to relent.

The daily chart shows us that even if Cardano price breaks below the 20-day SMA, there is another healthy support line at $0.31, wherein 41,000 addresses had previously purchased 3 billion ADA tokens.

The 4-hour chart shows sustained bearish momentum in the MACD indicator. Plus, the parabolic SAR has reversed from bullish to bearish. All these indicators tell us that the current market sentiment is very negative.

Around 55% of all ADA wallets have all of their funds delegated to a stake pool. The consistent increase in new ADA wallets created, along with the surge in the total number of ADA staked, has made Cardano one of the most decentralized blockchain networks out there.

With more than 69% of the total circulating supply of ADA staked on the network, Cardano appears to be getting close to its promise to become 100 times more decentralized than Bitcoin. Many have attributed the surge in new wallets creation, and the total amount of ADA staked to the overall bull market. Several experts noted that ADA was reacting to the recent altcoin boom.

Most of Cardano’s on-chain metrics seem to be growing at a consistent pace many weeks into a consolidated phase. According to Pieter Nierop, a Cardano stake pool operator, the number of wallets that have delegated all of their ADA has reached its all-time-high number of 152,417. This represents 54.925% of the total 277,538 ADA wallets. 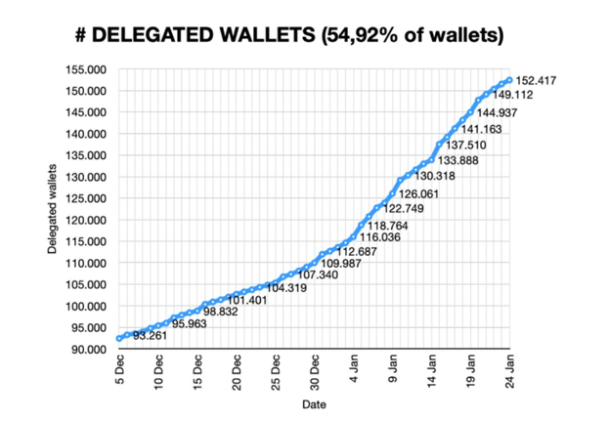 Since the beginning of 2021, more than 600 million ADA has been delegated to stake pools. Data from AdaPools and AdaStat shows that there is presently 22.1 billion ADA staked, a notable increase from the 21.45 billion staked on January 1, 2021. 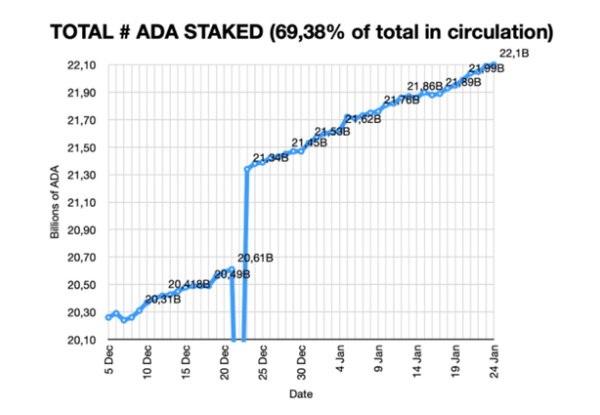 Another proof of Cardano’s rapid decentralization is the sharp decrease in ADA's average number delegated per wallet. Since December 25, 2020, the average number of ADA in delegated wallets has been steadily decreasing and now stands at just under 145,000 ADA. This means that the network is being controlled by a large number of users that hold smaller amounts of ADA. 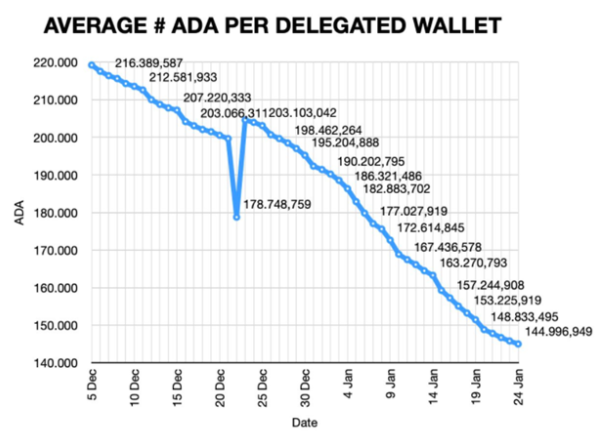 If Cardano price somehow manages to break below the 20-day SMA, it’s hard to see ADA go below the $0.31 support unless it faces tremendous selling pressure.