The Cardano price continued on its downward trajectory over the weekend, as sellers continued to push the price down during the current session. ADA had dropped over 7% on Wednesday, as it slumped after reaching $2.27. By Friday, the price was down to $2.04, where the 20-day SMA acted as support. The price posted a marginal recovery over the weekend, when it rose slightly on Saturday but fell back into the red during the current session, slipping below the 20-day SMA.

The Cardano price was quite bullish at the start of the previous week. ADA pushed up over the previous weekend, as the price rose by 1.14% on Saturday before another increase of 0.79% on Sunday pushed the price to $2.02. The week started in the same vein, as ADA rose by over 5% on Monday, pushing above the 20-day SMA, and settling at $2.12. The bullish sentiment continued on Tuesday, as ADA rose by almost 7%, pushing past the 50-day SMA and settling at $2.27. However, after reaching this level, ADA turned bearish, registering a significant fall on Thursday. 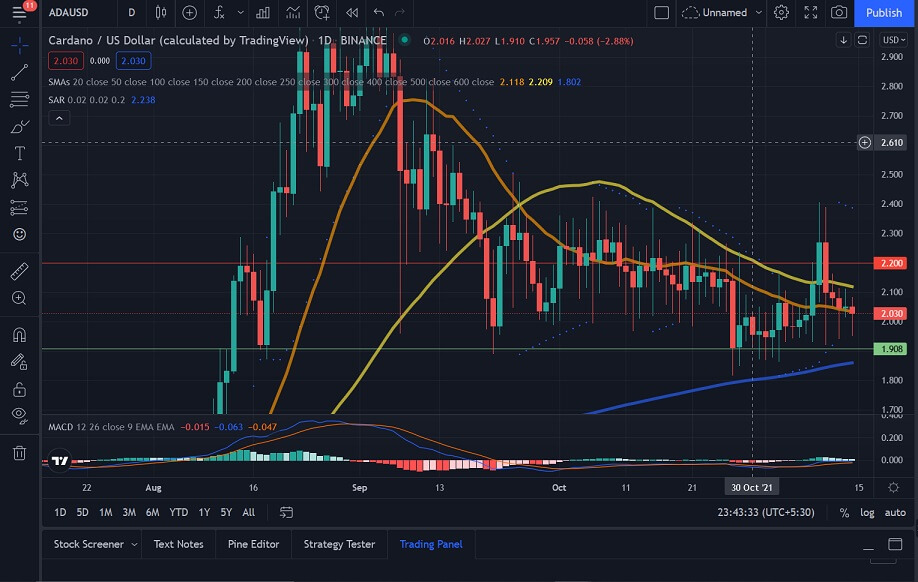 The Cardano price fell back into the red on Thursday, as it registered a drop of 7.49%, slipping below the 50-bar SMA and settling at $2.10. ADA continued to drop on Friday, falling to $2.08 as sellers managed to retain control. The weekend saw the bearish sentiment continue, as sellers pushed the price down to $2.04, where the 20-day SMA was acting as support. ADA posted a marginal recovery on Sunday before falling back during the current session. While the Parabolic SAR has flipped to bearish, we can see that the MACD is still bullish. However, if the price continues to drop, we could see it flip to bearish.

Looking at IntoTheBlock’s IOMAP for the Cardano price, we can see that ADA faces strong resistance at around $2.05. At this price level, almost 270.000 addresses have sold more than 4.8 billion ADA.

The 4-hour Cardano price chart shows us that ADA had surged to $2.30 on the 9th, after pushing above the 200-bar SMA. After reaching this level, the price dropped to $2.20 before rising marginally to $2.25. However, the price fell drastically after reaching this level, slipping below the 20 and 200-bar SMA and settling at $2.10. After another marginal recovery, the price dropped $2.08, and then to $2.01, as it slipped below the 50-bar SMA. The price recovered from this level but could not push past the 50-bar SMA and dropped to its current level of $2.02. We can see that the Parabolic SAR is currently bullish, while the MACD is bearish. If the price continues to drop, we could see the MACD flip to bearish. 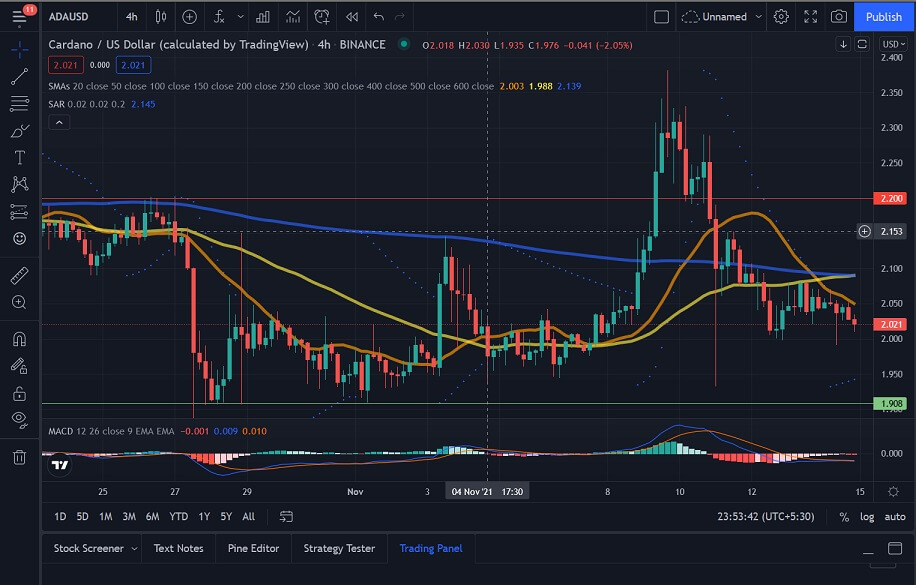 Odin has recently expanded its blockchain from using just Solana into incorporating Cardano, creating a multichain platform that will become more efficient and secure. Multichain uses more than one blockchain to operate a platform. The network assures network scalability by restricting the data shared every block and increasing transaction speed.

Multichain does not duplicate data to every node, unlike other blockchains where all nodes are expected to validate and keep transactions. The size of blocks is lowered by embedding hashes of big chunks of data rather than the data itself within transactions. Each piece of data’s decryption key is only shared with the participants who are supposed to see it.

Cardano (ADA) is a low-fee blockchain that can handle transactions and smart contracts without a lot of overhead. Its dual-layer architecture separates computing tasks from settlement procedures, allowing each layer to handle the increased workload. Cardano may not be the cheapest cryptocurrency to trade, but it is unquestionably a low-fee coin to transfer and engage.

On a separate note, Odin has also announced its partnership with OKEx, part of Odin’s plans to integrate with exchanges to streamline integration between the platform and the various exchanges available. The Odin team is working on allowing the platform to support connecting to both centralized and decentralized exchanges.

Looking at the Cardano price chart, we see that ADA has been quite bearish since the previous week. If the current trend continues, we could see ADA slip below $2.