Cardano Price Analysis: Is ADA Finally Going To Break Past $1?

After finding support at the 20-day SMA, the Cardano price has jumped from $0.34 to $0.973, over the month of February. So, does ADA actually have what it takes to reach $1? Let’s take a closer look with technical analysis.

Cardano price has had seven straight bullish days, wherein it jumped from $0.43 to $0.973, more than doubling its price. However, do note that ADA has already been rejected at the $1 line. The relative strength index (RSI) has hovered deep into overbought zone, so ADA is due a correction.

Cardano price lacks strong resistance levels upfront, so the bulls shouldn’t face a lot of friction. On the downside, there is a healthy support line at $0.81, wherein 41,200 addresses had purchased 2.5B ADA tokens.

Looking at the 4-hour Cardano price chart, we can see that ADA flashed the sell signal in the form of a green-nine candlestick. Since then, ADA dipped to $0.90, before rising to $0.97. The MACD shows sustained bullish momentum, so more growth is expected.

Cardano Staking To Soon Kick Off On Binance

Binance exchange has recently announced that it will launch ADA and Cosmos (ATOM) staking. Interest in both these assets has been spiking in recent times. While ATOM surged to a new all-time high in January, ADA hit a three-year high recently. 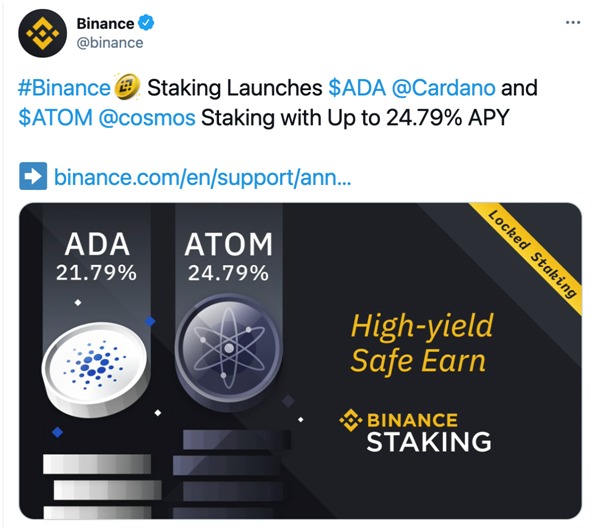 The two new additions bring the total number of digital assets available for locked staking on Binance to 36. The locked staking option enables users to stake at least one unit of both crypto assets. The maximum staking limits are 1000 ADA and 50 ATOM per user.

Users cannot withdraw or trade their staked coins during the locked period as it will be deducted from their spot wallet. However, they can redeem the tokens before the unlock date - at a cost. Users who choose early redemption will have their received interest deducted from the principal, which will be refunded within three days.

We expect Cardano price to break past the $1-mark soon.