The Cardano price has jumped from $1.92 to $2.36 over the last two days. ADA reached an intraday high of $2.45 before dropping down to current levels. During this rise, Cardano managed to reverse the parabolic SAR from negative to positive. The MACD indicates rising bullish market momentum,

The Cardano price faces immediate resistance at $2.11. Previously, at this level, more than 37,000 addresses had purchased nearly 860 million ADA tokens.

Data provided by Pooltool, a Cardano data aggregating tool, has indicated that ADA’s staking wallets have exceeded 754,978. Compared to June 3, 2021 figures, the platform has added over 146,506 wallets representing a growth of about 24+%.

The wallets translate to $46.91 billion in ADA’s staked value accounting for 71.25% of the $65.8 billion total supply. The increase in Cardano’s total staked wallets comes ahead of the Alonzo Purple upgrade slated for September.

Recently, ADA staking has been made available to most investors, with several platforms increasingly giving investors exposure to Cardano staking. Recently, Canada’s publicly-traded company iMining included Cardano to its list of supported assets for its staking services. The initiative is targeting institutional investors. Elsewhere, investors can stake ADA through the U.S.-based cryptocurrency exchange Kraken.

The growth in ADA-staked wallets can also be attributed to Cardano’s staking model. The platform offers consistent rewards that are often distributed to stakers. Additionally, ADA is simple to understand and more accessible to the average investor while offering an ower barrier to entry than competitors.

Furthermore, the upcoming upgrade correlates with increased activity on the Cardano network that has impacted the token’s price. The upcoming September upgrade ​​will see the network integrate smart contracts. The smart contract introduction is a significant milestone for the network competing directly with Ethereum. This latest update follows the White hard fork.

According to the CEO of Cardano, Charles Hoskinson, users will be able to run smart contracts the moment the hard fork comes on. 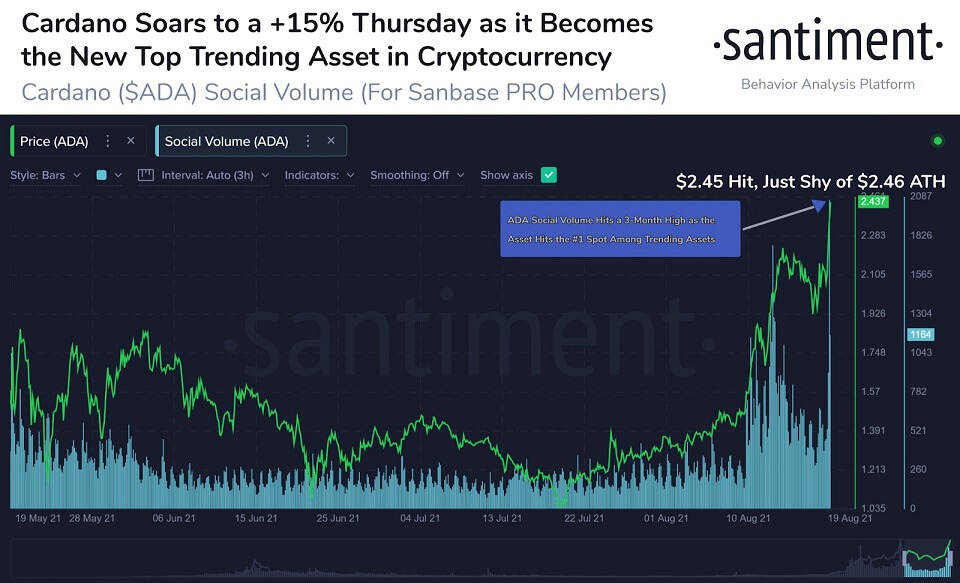 "#Cardano just scraped within a single cent of its $2.46 #AllTimeHigh, seeing resistance as it reached the $2.45 just 15 minutes ago. Regardless, the +15% price pump is a welcome sight, & enough to propel it to be the top asset on Emerging Trends."

Cardano Price Is Expected To Reach These Level

The Cardano price must break down the $2.50 psychological level and reach new all-time highs.