The Cardano price fell further this week after ADA opened in the red on Tuesday. ADA had recovered on Saturday after a bearish week, rising by over 10% to push up to $2.63. However, the price fell on Sunday, falling by over 2% to fall to $2.58. Monday started on a similar note, with ADA in the red, with the price falling by nearly 7% to settle at $2.40. The current session started on a positive note for ADA but saw sellers take over the session and push the price down to the current $2.34.

The Cardano price has endured a very bearish September since it hit its all-time high of $3.10 on 2nd September; ADA began the previous week on a bearish note, with the price falling by 2.68% on Monday to settle at $2.83. The next day, ADA fell by over 11% to slip below the 20-day SMA, settling at $2.51. The rest of the week saw the same trend, with sellers controlling the market and pushing ADA down towards $2.3. By Friday, ADA had dropped down to $2.3, capping a bearish week for ADA. 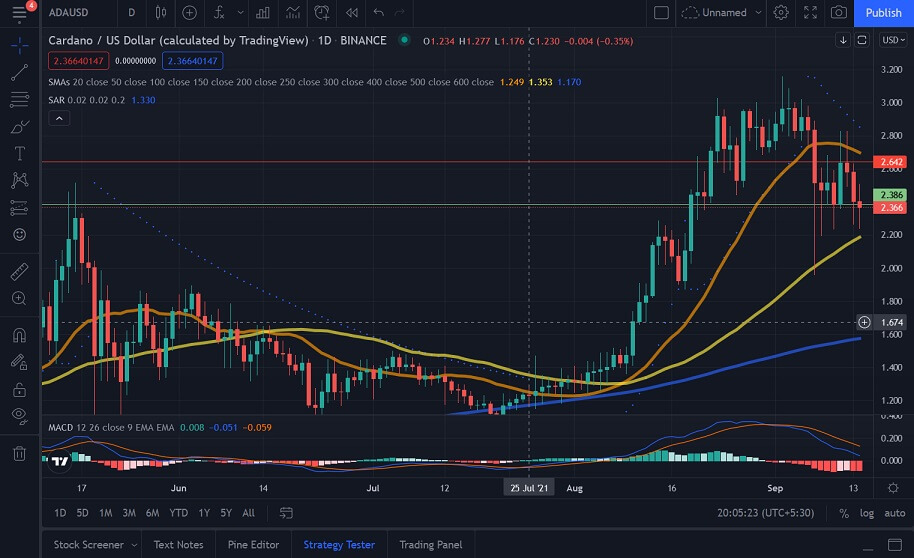 On Saturday, the Cardano price recovered strongly, rising by over 10% to push up to $2.63. However, ADA fell back into bearish territory on Sunday, falling by over 2%. Monday saw more of the same, with ADA starting in the red and losing 6.92% to close just above the support at $2.38. However, the current session saw ADA pierce this level of support, falling to $2.37. Looking at the MACD and the Parabolic SAR, we can see that both are currently bearish, which means that ADA could fall further during the current session.

Looking at the 4-hour Cardano price chart, we can see that ADA has been fairly bearish over the past few sessions. The price had pushed past the 200,20 and 50-bar SMAs on the 11th to settle at $2.71 but fell back $2.59 on the 12th. The price pushed back to $2.71 but fell below the 50-bar SMA, and subsequently, the 20 and 200-bar SMA, falling to $2.36 on the 13th. After pushing back up to $2.43, the current session has seen ADA pushed back down to its current level of $2.37. Looking at the MACD and the Parabolic SAR, we can see that both are currently bearish, indicating that the price could fall further during the current session. 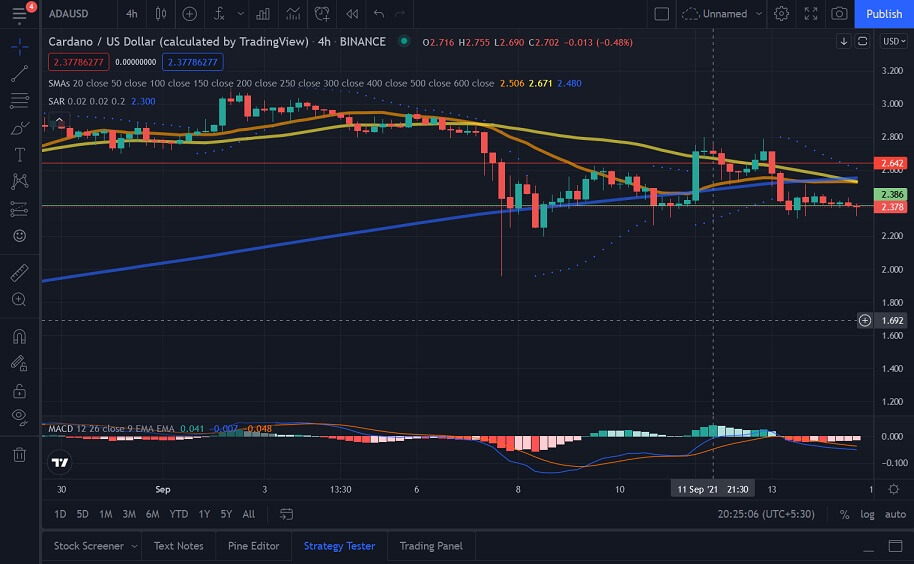 Cardano recently revealed that it has successfully rolled out the scheduled Alonzo upgrade, which introduces the ‘smart contracts’ feature, which allows for non-fungible tokens (NFTs). But the creators have warned that the first use cases may not be seen for years to come.

"The Alonzo upgrade will bring highly anticipated capabilities to Cardano... this is where the mission truly begins as we – the whole community – start delivering on the vision we have all been working towards for so long."

Like Ethereum, the Cardano blockchain is also based on the PoS system, which requires miners to put up their crypto. Only those with the largest stake will be rewarded for their services. It reduces the overall computing power required for mining on a public blockchain. Hence, it is more environmentally sound.

On the other hand, Ethereum’s London Hard Fork rolled out on August 5 and is seen as the first step towards version 2.0 of the platform, which will arrive next year.

The new system moves the Ethereum blockchain towards the proof-of-stake system like Cardano. It reduces its environmental footprint and the transaction fees required on the network.

Looking at the Cardano price chart, we can see that just as last week, ADA had an extremely bearish start to the week. If the current trend continues, we could see ADA potentially slip below the support at $2.38 and push down towards $2.20, where the 50-day SMA could act as support.