Cardano Price Prediction: ADA Continues To Be Bullish As Price Rises To $2.24

The Cardano price continued to push upwards during the current session, increasing to $2.24. ADA was quite bearish over the weekend and the start of the current week, with the price slipping below the 20-day SMA on Saturday. The price continued to fall on Sunday, and Monday saw ADA slip to $2.12. ADA fell to $2.10 on Tuesday before the price recovered on Wednesday, rising by 3.81% and settling at $2.18, just under the 20-day SMA.

The Cardano price was bearish for a majority of the current month, but the past couple of days have seen the price turn bullish as buyers take control.ADA had started the previous week on a bearish note, with the price down by 0.82%. ADA continued to remain bearish on Tuesday, as the price fell by a further 2.51%, before recovering on Wednesday and registering an increase of 3.37%, pushing up to $2.18. The price fell once again on Thursday before pushing up by 2.01% on Friday and settling at $2.21. 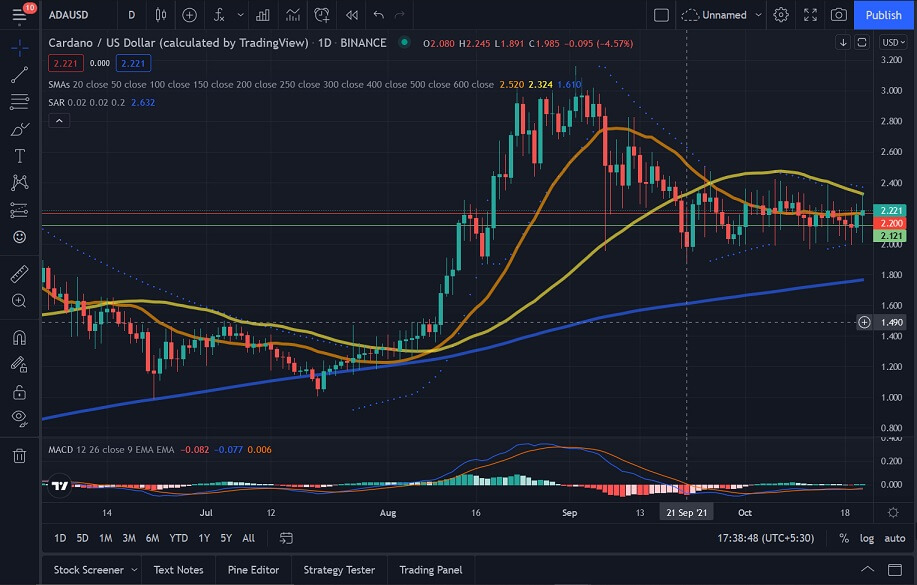 The Cardano price fell back into bearish territory over the weekend, as the price dropped by 1.73% on Saturday and 0.89% on Sunday to end the previous week at $2.15. The current week saw the bearish sentiment persist on Monday, as the price dropped to $2.21 and then $2.10 on Tuesday. ADA finally recovered on Wednesday, as the price pushed up by 3.81% to settle just below the 20-day SMA at $2.18. The current session sees ADA at around $2.22, with buyers looking to push the price higher. The Parabolic SAR has flipped to bearish, indicating that the price could fall below the 20-day SMA. If the price drops, then we could see the MACD also flip to bearish.

Looking at IntoTheBlock’s IOMAP for the Cardano price, we can see that LINK has strong support at around $2.19. At this price level, over 239,000 addresses have bought more than 8 billion ADA.

The 4-hour Cardano price chart shows that ADA had pushed up to $2.24 on the 16th, where the 200-bar SMA acted as resistance. The price dropped significantly after reaching this level, as it dropped to $2.18, slipping below the 50-bar and 20-bar SMAs to settle at $2.18. The price took a bearish turn after reaching this price level, as the price dropped to $2.12 before rising to $2.15. However, the price fell back in the red, falling $2.09, before surging to $2.14, pushing above the 20-bar SMA and settling at $2.14. The price continued to rise, moving to $2.19, and pushing above the 50-bar SMA. After a minor drop, the price pushed up again, rising to $2.25. We can see that ADA is currently at $2.24, and with the Parabolic SAR and MACD bullish, we could see the price rise further. 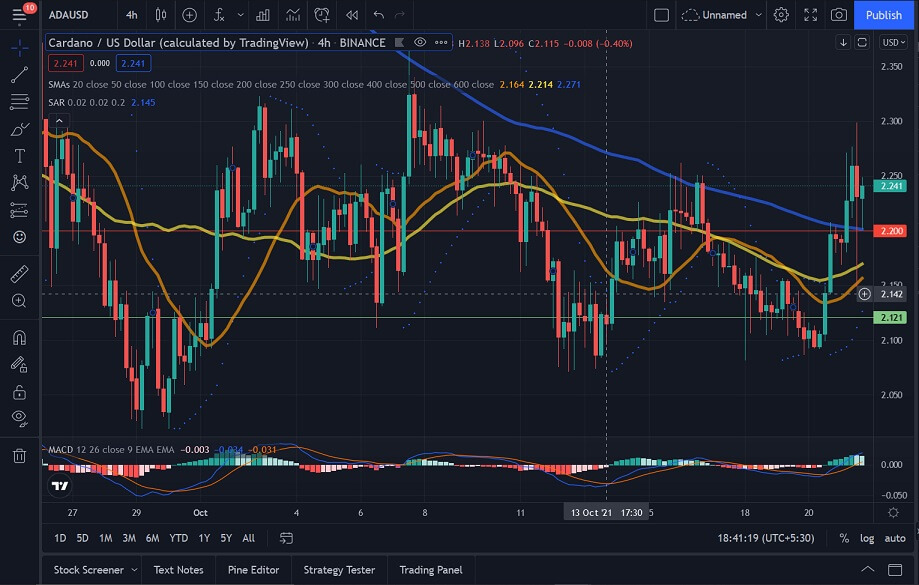 The Cardano price has recovered strongly after falling to $2.10 on Tuesday. The price rose by 3.81% on Wednesday, and the current session sees ADA up by over 2%. If buyers maintain control of the session, then we could see the price push to $2.25.