Cardano Price Prediction: ADA Falling Towards $2 After Starting Current Session Back In The Red

The Cardano price was back in the red today, after a slight recovery on Wednesday that market watchers hoped would be a turning point in ADA’s fortunes. ADA has been bearish all week, after ending the previous week on a bearish note as well. ADA started the current week on a negative note, and by Tuesday, the price had fallen to $2.03, with ADA in danger of slipping below the $2 level. A brief recovery on Wednesday prevented that, but the current session finds ADA back in the red, with the price falling towards $2 once again.

The Cardano price has been bearish all month and started the previous week keeping with this trend. ADA had slipped below the 50-day SMA on Sunday (19th) and then fell further on Monday, falling by over 8% to drop to $2.08. Tuesday saw ADA slip below $2 as the price fell to $1.98 before recovering on Wednesday and rising to $2.25. The price rose further on Thursday as it moved to $2.32. But with the 50-day SMA acting as resistance, the price fell back on Friday, settling at $2.27. 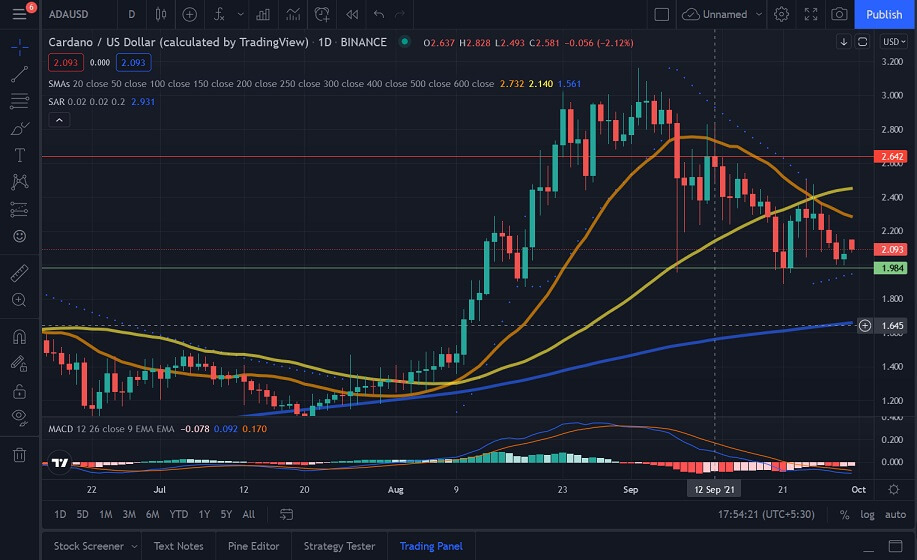 The Cardano price recovered on Saturday, rising by a marginal 1.02%, but with the 50-day SMA and the 20-day SMA performing a bearish cross, the price fell back in the red on Sunday, dropping by 4.07% to end the previous week at $2.20. Monday saw ADA start in the red once more, as the price fell to $2.13 and then to $2.03 on Tuesday. After nearly slipping below $2, ADA recovered marginally on Wednesday but fell back in the red during the current session, with sellers pushing the price towards $2. While the Parabolic SAR is bullish, we can see that the MACD is bearish, indicating that the price could fall further. 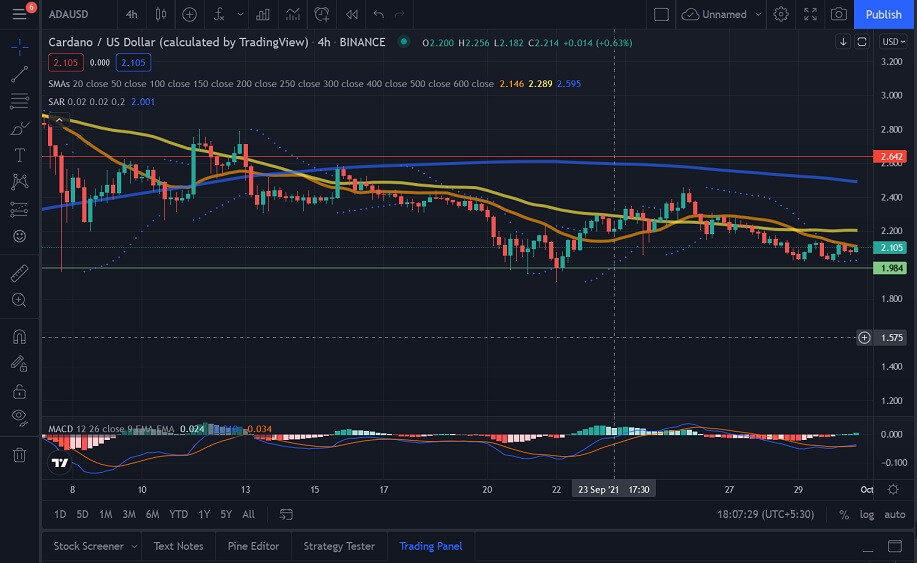 “The ADA listing is a major milestone for our community that now can trade ADA for free. We are inspired by Cardano’s commitment to scientific rigor and excellence. The listing sets the foundation for a deeper partnership that can serve the bigger community to unlock the full potential of blockchain and smart contracts to democratize finance.“

“This listing on Lykke, which will allow its user base to access ADA for the first time, marks another significant milestone in the development of Cardano. Capital bridges and the entry of traditional market makers into the crypto space allows users to leverage liquidity and move seamlessly between fiat and crypto ecosystems. It also serves to both empower our nascent ecosystem and enrich the wider blockchain space.“

To trade ADA for free on Lykke, users have to onboard and pass a KYC verification process. The venue offers a free crypto app, a web trading terminal, and a fiat gateway for Euro, CHF, and GBP.

Looking at the Cardano price chart, we can see that after a marginal recovery on Wednesday, ADA is back in the red, and with sellers in control of the market, we could see the price fall towards $2 or below it.