Over the last two days, the buyers have managed to eke out an advantage after bouncing up from the 50-day SMA. The Cardano price is presently stuck below the 20-day SMA. However, the MACD shows increasing bearish market momentum, this tells us that the sentiment is currently negative.

Looking at the IOMAP, we can see that the Cardano price faces immediate resistance at the 20-day SMA. Previously, at this level, almost 160,000 addresses had purchased over 2.3 billion ADA tokens.

CryptoDiffer data has shown that over the past month (till June 4th), Cardano was the most active crypto project on GitHub, with 436 commits. Polkadot closely followed this with 407 commits. Ethereum ranked fifth with 271 commits. Notably, a snapshot of data from this time last year also shows Cardano leading the pack in Github activity. Back then, Ethereum placed third, while Polkadot was not listed. 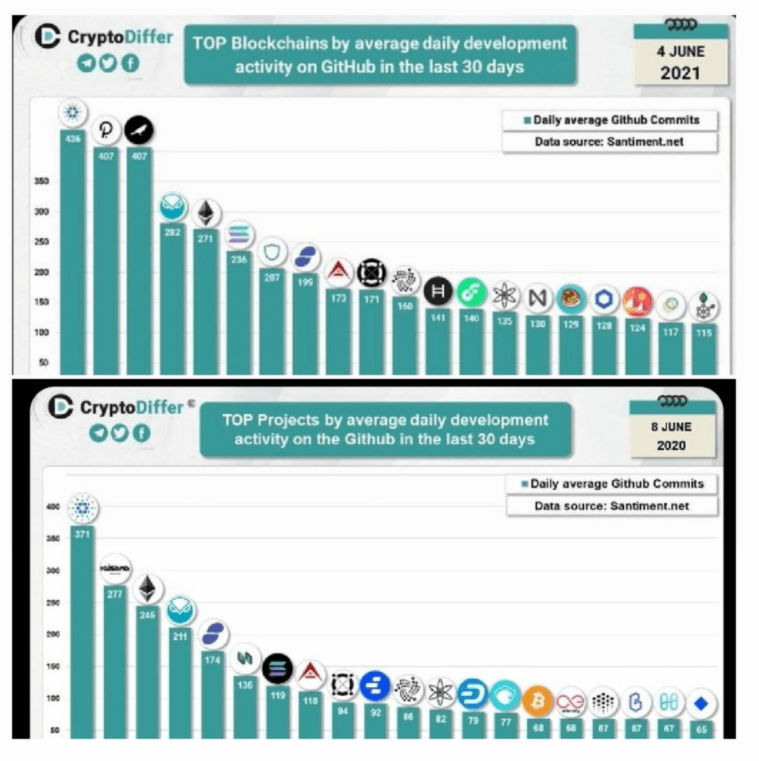 Additionally, the upcoming Fund4 Project Catalyst (PC) vote opening will enable ADA holders to have the opportunity to shape Cardano’s future further. PC refers to an experiment in community innovation to build a framework turning ideas into real-world projects. PC falls under the Voltaire governance phase of the Cardano roadmap. An excerpt reads:

With the introduction of a voting and treasury system, network participants will be able to use their stake and voting rights to influence the future development of the network.

It aims to achieve high levels of community collaboration to seed the best ideas with funding through the community’s agreement. This forms the basis for a self-sustaining model for the future of Cardano.

Cardano CEO Charles Hoskinson had earlier identified governance as the big differentiator between Cardano and Ethereum and why Ethereum’s long-term prospects are somewhat hazy.

Each funding round has grown in scope, engagement, and funding. Fund4 is the biggest round to date, with a million dollars available to fund development projects. IOHK claimed that Fund4 offers a significantly improved voting process over the previous round, with voting now available directly in the native Daedalus wallet.

If the Cardano price breaks above the 52-day SMA, it will likely reach the $1.70 psychological level.