The Cardano price kept up with the ongoing trend in the crypto market that sees most altcoins in the red. ADA had turned bearish over the weekend, recording a fall of over 3% on Sunday to slip below the 20-day SMA. ADA continued to be in the red on Monday as well, registering a fall of 0.82% and falling further on Tuesday, dropping to $2.11. The current session sees ADA in the red as sellers look to push the price further down towards $2.10

The Cardano price has not seen much movement during October, except on the 1st (Friday) when the price rose by 6.73% to settle at $2.25, where the 20-day SMA was acting as resistance. The price did not see much movement over the weekend but fell on Monday as ADA dropped to $2.19 before recovering on Tuesday and moving up to $2.23. ADA continued to see-saw as it fell by 1.07% on Wednesday before recovering on Thursday, rising by 3.11% to move up to $2.27. However, Friday saw the price back in the red, as ADA fell by 1.81% to settle at $2.23. 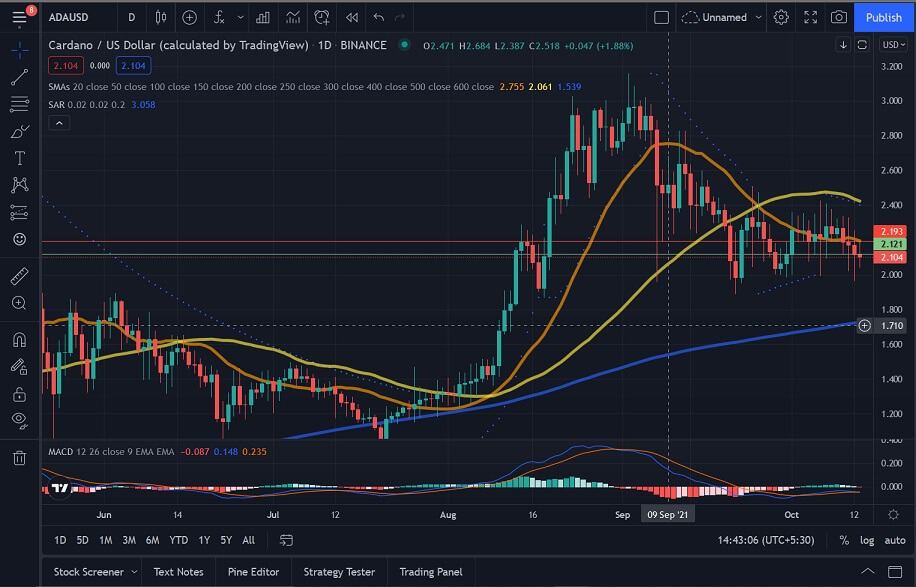 After falling to $2.23 on Friday, the Cardano price recovered on Saturday, registering an increase of 1.43% to push up to $2.26. However, ADA turned bearish as the price registered a drop of 3.48% on Sunday to $2.19, slipping below the 20-day SMA. The price continued to be bearish on Monday, dropping by 0,82% before falling further on Tuesday, registering a fall of 2.51% to drop to $2.11. The current session sees buyers and sellers trying to take control. The Parabolic SAR is bearish, while the MACD has also flipped to bearish, indicating that the price could fall further.

IntoTheBlock’s IOMAP for the Cardano price indicates that ADA faces strong resistance at around $2.20. At this price level, over 215,000 addresses have sold more than 6.6 billion ADA.

The 4-hour Cardano price chart shows us that the 200-bar SMA is acting as resistance, pushing ADA down. ADA had broken past the 50-bar and 20-bar SMAs on the 7th when the price had reached 42.32. However, with the 200-bar SMA coming into play as resistance, the price fell to $2.23 before recovering marginally to $2.27. ADA stayed at this level for a few sessions before dropping to $2.19, slipping below the 20-bar and 50-bar SMAs. The price then fell further to $2.10, a level that it is still currently at, and with the Parabolic SAR and the MACD both bearish, we could see the price fall further. 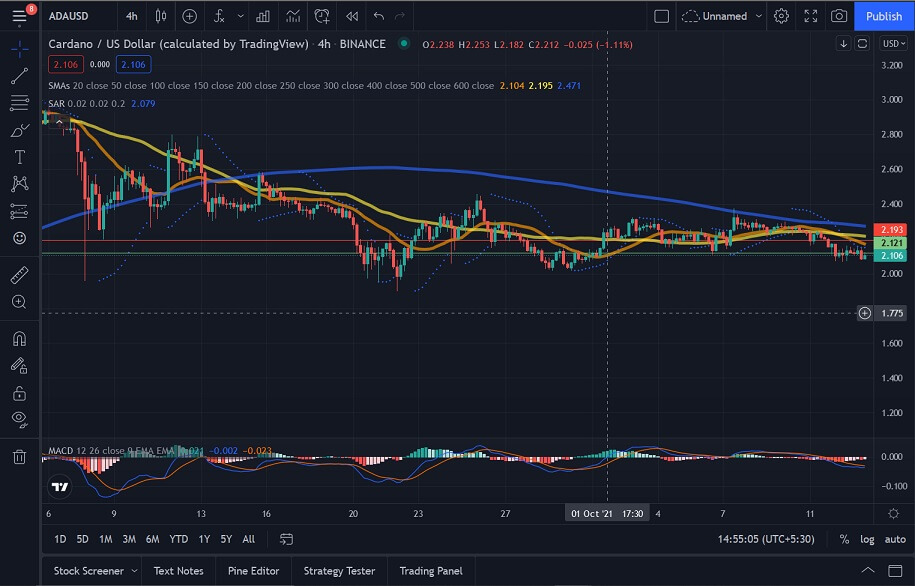 During the Cardano Summit concluded in September, the firm announced a $100 million investment in Cardano-focused projects by EMURGO. The commercial arm of the Cardano Foundation had made significant investments into several startups that were domiciled in Africa. These startups would receive support in varying degrees, from financial to educational, as the need arose.

Seed investment rounds of companies Milkomeda, ADAVERSE, and Adanian all saw participation from the Cardano network through EMURGO. Some of these projects were incubators for other Cardano-focused projects. Milkomeda is a dcSpark sidechain that provides a bridge between the Cardano blockchain and other layer blockchain protocols.

Africa has proven itself a breeding ground for innovative crypto technology, and founder Charles Hoskinson wants to tap into this climate. Hoskison recently tweeted his plans for the future.

"Just got back from Wyoming, and I'm ready for this upcoming week. Heading to Africa soon- starting in South Africa all the way up to Egypt. Let's go change the world together."

With Bitcoin rallying this week, altcoins have moved in tandem with the leading cryptocurrency. Speculations were that the revived momentum in the broader crypto market would provide the push needed to get ADA back to its previous highs. But so far, the asset has not made any significant recoveries.

Looking at the Cardano price chart, it is evident that ADA is currently in a bearish phase, as is the trend across most altcoins. With the price firmly in the red, ADA could drop towards $2 if the current sentiment persists.