Between June 4 and June 22, the Cardano price crashed from $1.84 to $1.15 – losing almost $0.70 in its overall valuation. During this crash, ADA managed to flip the 20-day and 50-day SMAs from support to resistance. Read on to find out what happened after that.

On June 23 and June 24, the Cardano price jumped from $1.15 to $1.36. Following a rejection at the 20-day SMA, ADA fell to $1.24. Since then, ADA has been trending horizontally below the $1.30 resistance barrier. The relative strength index (RSI) indicates that Cardano could jump some before getting overpriced.

As per the IOMAP, the Cardano price faces crucial resistance at $1.30. Previously, at this level, over 125,000 addresses had purchased nearly 3 billion ADA tokens.

In a new tweet, Van de Poppe mentioned that while Cardano has recovered a key level against Bitcoin (ADA/BTC), the pair must retest it as support to potentially ignite a fresh rally.

Cardano breaking back up in which it should be flipping the 3,800 satoshis (0.000038) level if it wants bullish continuation. 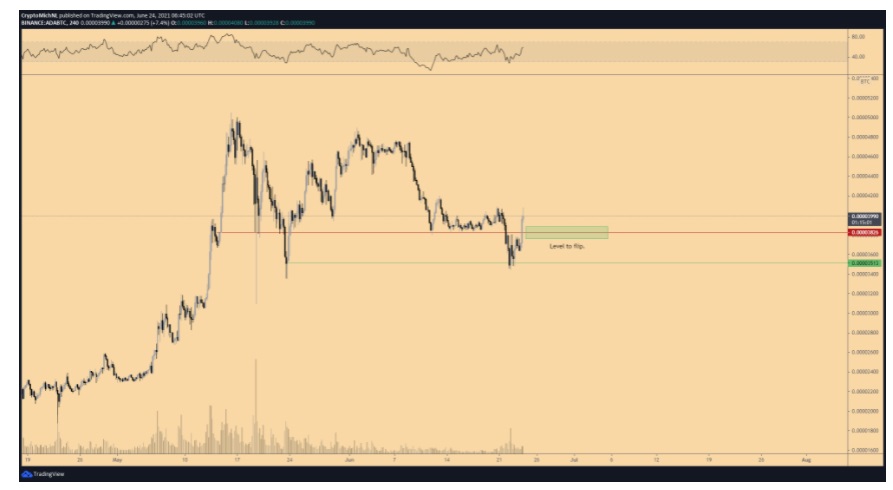 As for Ethereum, the trader said that the leading smart contract platform must stay above support of around $1,800 to have a shot at launching a 27% surge.

Another altcoin on Van de Poppe’s radar is the supply-chain management protocol VeChain (VET). The crypto strategist highlighted that should VET hold its long-term support, as he sees the crypto asset erupting nearly 60% toward an immediate resistance.

VeChain still consolidating here. The critical level is $0.095 to break. Support is found at $0.06.

The next altcoin on the trader’s list is blockchain video sharing platform Verasity (VRA). According to Van de Poppe, VRA has become interesting after retracing to a significant support zone around $0.008. The crypto trader added that a move above $0.0135 could potentially catapult the coin to its next resistance of $0.024, representing a potential move of over 77%.

Verasity? Everybody wanted to have that one a few months ago as it would disrupt the gaming industry. Now? Nobody wants to have it, while it’s having some interesting retests and clear support tests happening here. I think it might become interesting.

The Cardano Price needs to take down three resistance levels – $1.30, 20-day SMA, and 50-day SMA. If the buyers successfully do this, they will flip the parabolic SAR from negative to positive.